EVER since the Romans constructed sophisticated tide mills across the high maritime ranges of a conquered Britain, the modern world has been trying to master the mystery of harnessing the power of the sea.

Elegant waterwheel-driven milling houses peppered the coast soon after the legions had left their imprint on southern England. Similar examples have also been found in Ireland where tidal reaches were used to mill grains, with one particularly well-preserved archaeological site at Northern Ireland’s Nendrum Monastary dating back to 619AD.

Perhaps one of the most successful examples of continuous use can be found in Woodbridge, Suffolk, where a tide mill has stood since 1170, and continued to produce flour for eight centuries, before closing down as a commercial operation in 1957.

For those 800 years, however, the technology and processes did not alter in any way. The surge of the tide’s ebb and flow would drive the wheel, and the wheel would turn the grinding stones.

In short, the techniques used by the Roman engineers to capture the sea’s industrial potential had barely altered in nigh on two thousand years.

Time and tide, though, wait for no man, and the demand for cleaner energy in recent years has steered scientists towards revisiting and reworking the potential within Britain’s vast coastal ranges.

Leading the way is Gloucester-based Tidal Lagoon Power – a firm planning operations in Wales, with support from the UK government – with the aim of engineering a ‘trial’ lagoon in Swansea Bay that could deliver enough electricity to power 150,000 homes.

After a barrage spanning the expanse of the River Severn was rejected by three committees and the UK government owing to ‘strong environmental concerns’, a more incremental approach was urged as being ‘lower risk and lower impact’. 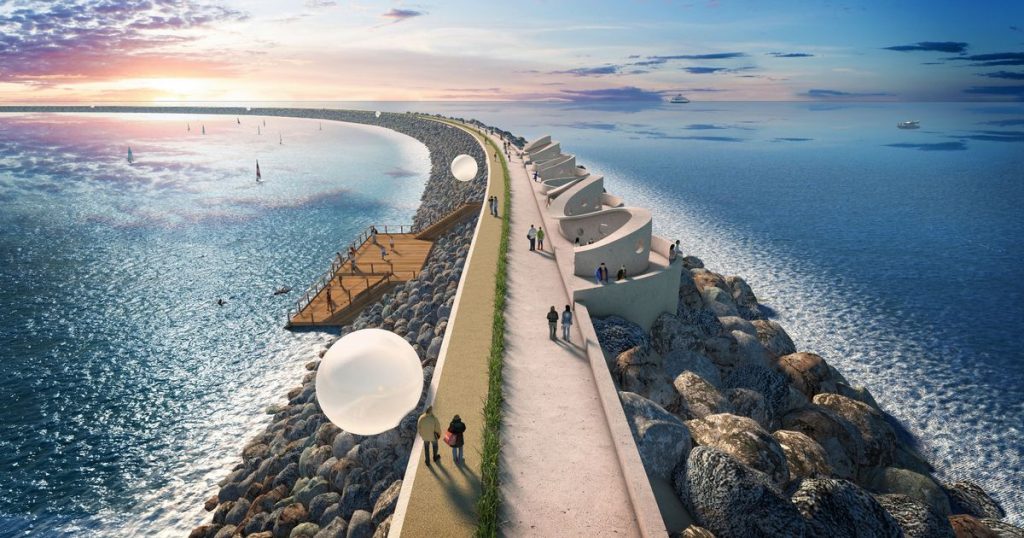 Tidal Lagoon Power had already started work on a fleet of UK power stations and, in 2012, they submitted formal plans for a tidal lagoon in Swansea Bay, which would serve as a ‘pathfinder’ for a further five larger projects around Britain with scope to export the technology to other countries. This privately funded pilot scheme would cost £1.3 billion, and is expected to contribute £316 million in Gross Value Added to the Welsh economy during construction, followed by £76 million in each of its 120 years of operation.

The Conservative Party committed to the lagoon in their 2015 manifesto and as Charles Hendry’s independent report was positively gushing in its support in January, it now only requires the green-light from Business & Energy Secretary Greg Clark.

However, the silence from Whitehall since then has been deafening, prompting a hundred MPs to write a letter to Clark calling on him to approve the world’s first tidal lagoon power plant. Some observers, though, believe the lagoon will be rubber-stamped before the end of summer.

Swansea is no stranger to being an engineering pioneer. In the nineteenth century it was the first place on the planet to produce copper on an industrial scale, being responsible for over two fifths of the world’s output between 1830 and 1870. This was the first globally integrated heavy industry as copper was brought originally from Cornwall and then from Cuba, Chile and as far afield as Australia to be smelted in the Lower Tawe Valley where the coalfield was closest to the coast. It offered the perfect infrastructure for such an operation, as twice the amount of coal over copper is required during the smelting process.

This brought vast wealth to the area, but also an extremely toxic cocktail of pollution that, over time, decimated the region’s crops and harmed livestock. This contamination remained long after the ‘Copperopolis’ was history and, in the 1950s, the valley was branded Europe’s worst post-industrial derelict landscape, with barren, blackened hills flanking the foul orange river as its acrid water flowed into the bay.

The prospect of creating jobs through clean and sustainable hydroelectricity in an area still scarred by the old heavy industries, still recovering from large-scale destruction suffered during the Second World War and heavily dependent on soon-to-end European grants, at a cost of, to quote Hendry, ‘less than a pint of milk a year’ would seem like a no-brainer.

Hendry, skeptical at the outset, finally reported: “I believe that the evidence is clear that tidal lagoons can play a cost-effective role in the UK’s energy mix and there is considerable value in a small (less than 500 MW) pathfinder project.” He went on to describe it as a ‘no-regrets policy’, adding: “It should be built as soon as reasonably practicable.”

The government’s hesitance comes down to the size of the subsidy or ‘strike price’.

As a pilot project in a complex, brand-new sector, it is normal for the subsidy to be set high, and if the technology were rolled out to schemes at Cardiff, four-times larger, and other locations, that strike price would come down dramatically. Estimates have ranged from £168 to the most recent £96.50, only slightly more expensive than the £92.50 agreed for the nuclear plant at Hinkley Point.

There are, of course, dissenting voices. Three days after Hendry’s report was published, Jonathan Ford – chief leader writer at the Financial Times, was witheringly dismissive of the ‘pint of milk’ cost analogy. 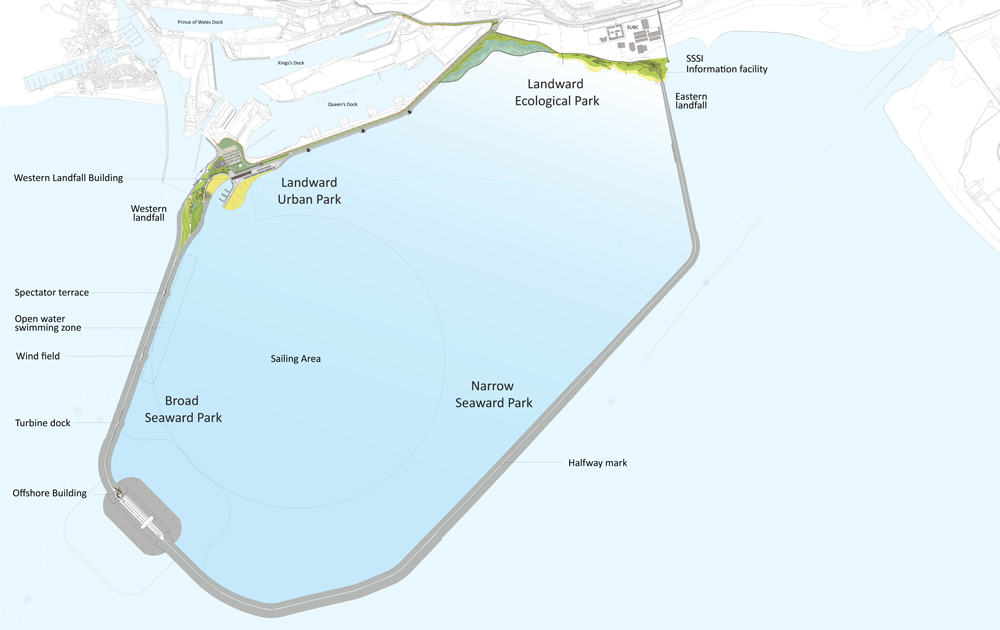 “Mr Hendry doesn’t even tell you the base number to which he’s adding his extra charge for tidal,” he slammed, before describing it further as “a classic bad statistic, as a very small power plant producing 0.2% of the power consumed in the UK and you spread the cost across all the households in the UK.” His verdict: costly and unproven.

Jonathan Guthrie, his colleague and City Editor at the FT countered that the locomotive and the motor car had also once been ‘costly and unproven’ and that this pilot scheme was ‘new, exciting and something we should embrace’.

When I spoke to Andy Field, Head of Communications at Tidal Lagoon Power, he told me that on cost there was no deal with the government, so any figure was an irrelevance. However, he stressed that the capital cost could be spread over 120 years as that was the lifespan of the barrage as opposed to 60 years for Hinckley Point.

On cost, he pointed out their remit was that 50% of their spend had to be in Wales and 65% in the UK as a whole. Moreover, the project would create hundreds of jobs locally and there would be other widespread benefits.

“The barrage will attract visitors who will then discover what else Swansea has to offer in natural beauty and culture,” he said.

Also, with an estimated 100,000 tonnes of steel required for the project and TLP’s commitment to using British raw materials, products and companies wherever possible, this could be a lifeline for Tata Steel’s struggling works across the bay.

In terms of the environment, the RSPB has expressed some misgivings, but believe the pilot should go ahead but there should then be a delay before constructing the Cardiff barrage to assess its impact on wildlife. It is anticipated this could prove very costly.

The only local opposition is from the Pontardawe & Swansea Angling Society who are concerned about the effect on salmon and trout that ‘massive unnatural flows’ will have, possibly interfering with normal migratory routes.

Mr Field responded by saying the wildlife and environment issues accounted for a significant portion of the concerns the project needed to satisfy in order to move forward.

“We need to prove the environmental case with Swansea in order to be able to continue with Cardiff and other full-scale projects and we will do so,” he said.

Meanwhile, it would appear that Tidal Lagoon Power have the endorsement of one of the world’s largest environmental organisations in the shape of Dr Doug Parr – Chief Scientist at Greenpeace UK.

“Tidal lagoon energy is the most reliable source of renewable energy for the UK – an opportunity to lead in generating clean power from Britain’s tides,” he stated.

“Furthermore, it will generate a significant chunk of the UK’s electricity needs, and help towards meeting our carbon targets whilst creating thousands of new infrastructure jobs too.”

Given the enthusiasm, surely it is the time, as the UK leaves the EU, for bold planning. This would represent a supreme show of confidence in the first industrialised nation in the world’s ability to move towards self-sufficiency in energy supply and to once again lead the world in cutting edge technology.