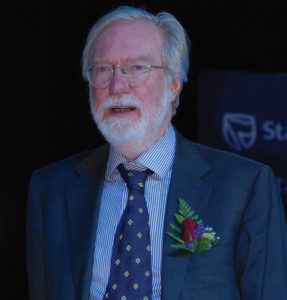 Sir Paul Collier CBE (Commander of the Most Excellent Order of the British Empire) specialises in the political, economic, and developmental plight of countries less fortunate than most. Sir Paul Collier is a professor of Economics and Public Policy at the Blavatnik School of Government, University of Oxford.

He holds down a number of other jobs as well such as directorships at the International Growth Centre and the Centre for the Study of African Economies. From 1998 until 2003, Prof Collier worked at the World Bank as director of the Development Research Group. He currently serves on the advisory board of Academics Stand Against Poverty (ASAP). Foreign Policy Magazine included the British professor in its list of most eminent global thinkers.

In 2008, Prof Collier was awarded a CBE for services to scholarship and development. Six years later, he was knighted for services to the promotion of research and policy change in Africa. In 2014, the professor also received the President’s Medal of the British Academy for his contribution to the translation of abstract ideas into concrete policy initiatives.

Prof Collier’s research covers the causes and effects of civil strife; the real-life results of development aid, and the challenges faced by democracy in low-income countries that are endowed with significant natural resources. More recently, Prof Collier has tackled the effects of mass migration. A prolific writer, Prof Collier currently churns out a major tome every two years.

His much-lauded 2007 book The Bottom Billion discusses the pro and cons of development aid. He coined the term for the mass of poor people who live in low-growth societies. In 2009, Prof Collier published Wars, Guns, and Votes: Democracy in Dangerous Places. Two years later (…), The Plundered Planet: How to Reconcile Prosperity with Nature (2011) was released. The book looks at sustainable management and geopolitics in the age of global warming. Prof Collier traces a path for continued growth that avoid the depletion of non-renewable resources and came up with a set of simple formulae:

In his latest book Exodus: Immigration and Multiculturalism in the 21st Century, Prof Collier turns his attention to migration. He emphasises the plight of those left behind and looks at how host societies deal with the arrival of newcomers.

Born on St George’s Day 1949 the son of a Sheffield butcher, Prof Collier might appear to be of yeoman English stock. However, the Collier family’s presence in Britain stretches back only about a century and started with Karl Hellenschmidt who left Germany penniless in search of a better life. Interned as an enemy alien during the First World War, Karl’s wife fell into terminal depression while the couple’s son quit school to run the family shop. The younger Karl soon changed his name to Charles Collier to facilitate the family’s absorption into mainstream English society.

Prof Collier stated that Exodus is an attempt to create a new framework for the national debate about immigration rather than a prescription for a politically correct exchange on the topic. He argues that policymakers of all political stripes have been asking the wrong question. Instead of questioning the merits of immigration, they could shift the discussion to talk about the optimum degree of diversity. To better understand this parameter, it is required to determine the rate at which migrants are absorbed into mainstream society. Prof Collier has created a model to gauge this rate. It employs a number of factors such as the size of the diaspora and its growth. Prof Collier posits that migration may increase the diaspora’s size, whereas “absorption into mainstream society” reduces it. He also argues that there exists a clear correlation between the size of the diaspora and the rate of absorption, i.e. the larger a diaspora, the less pressure is exerted on its members to embrace the host country’s values and society.

Prof Collier contends that for migration to be economically positive, every country must aim to achieve an equilibrium. This enables the governments of host nations to manage concerns over competition for jobs and resources. “The consequences of uncontrolled future immigration are potentially serious. Designing controls that are effective, just, and advantageous to all will be complex and contentious.”

Prof Collier’s ideas do not always meet with universal approval. However, his insightful, meticulously researched, and cogently argued contributions are of major significance.