As the UK Government opens its new ‘Catapult’ centre devoted to gene therapy manufacturing, could 2018 be the year of its mainstream commercialisation? BV’s RICHARD THOMAS investigates

FOR many, the concept of gene therapy is something new, even futuristic – but the idea itself goes back to 1972, and the techniques in use today were developed in the biotechnology boom of the ‘80s and ‘90s.

New gene therapies are being constantly developed; some are at the research stage, some in clinical trials, and one is already in use and actively being marketed. Britain’s new Cell and Gene Catapult has been backed by more than £60m in government funding, with 160 of its own in-house experts. 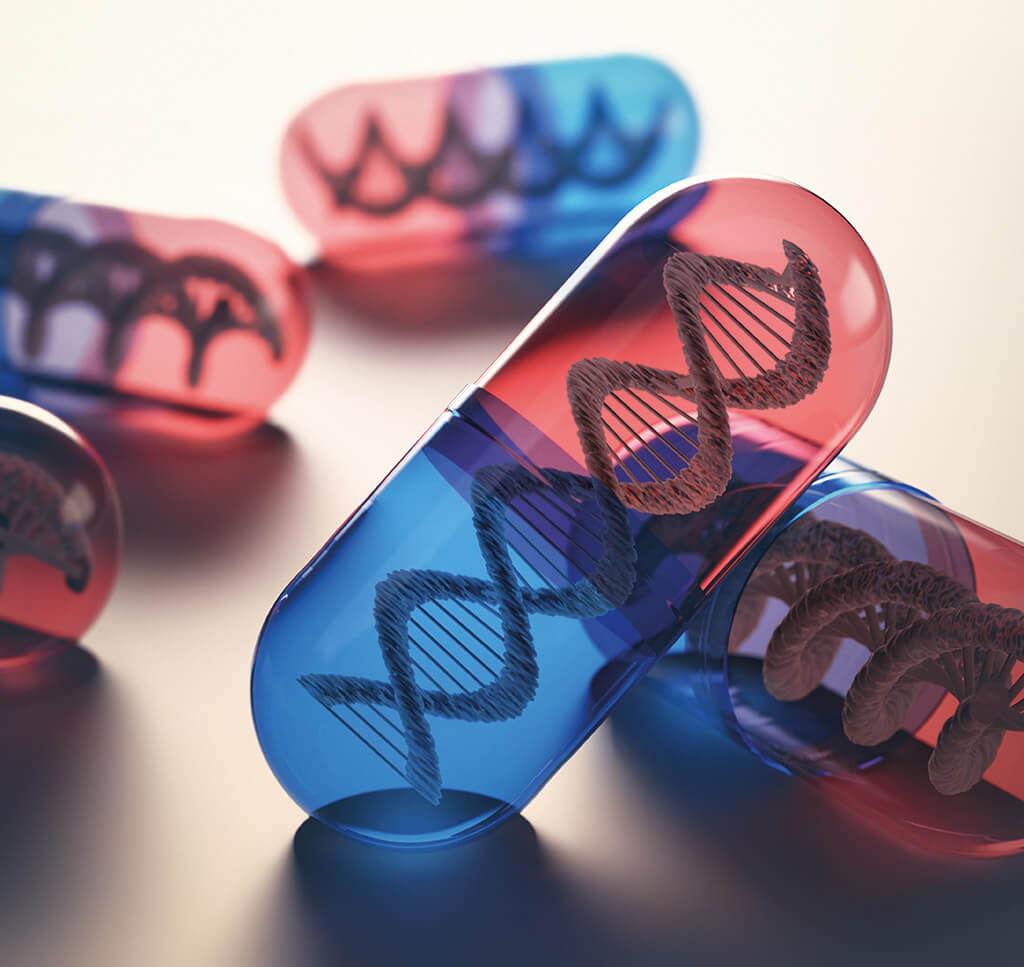 Gene therapy was initially touted as a panacea that was just around the corner; it didn’t live up to initial expectations. Science just doesn’t work like that. Progress comes via successful experiments, not hype – and with developments such as Catapult the reality may finally be catching up with the promise.

UK company Amryt Pharma recently announced it had licenced a gene therapy for epidermolysis bullosa (EB), a serious skin condition. Children with the disease are known as “Butterfly Children” due to the fragility of their skin. The therapy was developed by University College Dublin and Amryt’s role is to take the therapy through the clinical trial process.

Amryt (LON: AMYT) has a conventional therapy for EB in development, but CEO Joe Wiley is more enthusiastic about gene therapy, labelling it “one of the most exciting and potentially transformative areas of medicine today”.

At the current stage of development, gene therapy is used to treat diseases caused by a single genetic mutation. At their most basic level, genes are “instructions” which tell an organism (plant or animal) how to create a protein. Proteins themselves have many functions. They include enzymes, which facilitate chemical reactions essential to life, structural proteins, which control the size and shape of cells, and visual pigments in the retina, which enable vision.

A single mutation in one of these genes can mean that a vital protein can’t be made, and a function is disabled. This can lead to diseases such as haemophilia, sickle-cell anaemia and various forms of blindness.

All current treatments are for single gene mutations. The specific techniques vary according to the disease, but the most common replaces a faulty gene with a healthy copy. This is introduced into the patient via a “vector” — most frequently a benign virus. In some cases, the treatment must be regularly repeated to vanquish or control a chronic disease; in others, the treatment is a one-time, permanent cure.

There have been, and still are, hurdles to overcome. A patient’s immune response can reject the treatment by attacking the vector. Some genetic diseases are caused by multiple mutations, which require more complex treatment.

And, as with any novel treatment, there is a high financial cost, reflecting the cost of research, clinical trials and the development of all the candidate treatments – some of which would have been unsuccessful.

Glybera, made by Uniquire (Nasdaq: QURE), was a treatment for a rare inherited disease that causes severe pancreatitis, or inflammation of the pancreas. But the manufacturer dropped plans to seek approval in the US and announced that it would not be seeking renewal of the EU approval after it expired in 2017. There has only been one documented use of the therapy. Although the patient was said to be completely cured, the disease is extremely rare and the cost of treatment high – in the region of $1m.

In 2016 came another “miraculous” cure, Strimvelis, for Severe Combined Immunodeficiency (SCID), a group of diseases stemming from the faulty development of white blood cells (T and B cells).

Children suffering from SCID can’t develop a healthy immune system. The disease is often fatal during the first year of life.

Each treatment is personalised. Stem cells that would become blood cells are taken from the patient, purified and cultured. Then a virus, containing the working gene, is introduced. The modified cells are then infused to the patient, where they take root in the bone marrow (the site of human blood cell production).

From this point, at least in successful cases, the patient produces white blood cells that function correctly.

Developed by one of the biggest players in pharmaceuticals, GlaxoSmithKline (Nasdaq: GSK), Strimvelis became the second gene therapy approved for use in the EU.

Other developments in 2016 included improved therapies for haemophilia and some forms of blindness, breakthroughs in research using CRISPR – the system that allows precise editing of faulty genes – and the programming of white blood cells to fight certain types of cancer. Certainly, then, gene therapy’s most promising year to date.

And 2017 lived up to, and exceeded, its billing as the year of gene therapy breakthroughs. Possibly the most dramatic of these was a cure for sickle-cell anaemia developed by Bluebird Bio (Nasdaq: BLUE). The mechanism for this is very similar to the therapy for ADA-SCID, but the replaced gene is responsible for the structural integrity of haemoglobin (the protein within red blood cells that carries oxygen around the body).

The FDA approved two treatments that modify the patient’s T-cells (white blood cells) to attack cancers. Currently, these treatments are just aimed at one type of bone marrow cancer and a lymphoma, and are only used when other treatments, such as chemotherapy, have failed.

The first US approval for a gene therapy targeting an inherited disease came in December 2017. Luxturna, from Spark Therapeutics (Nasdaq: ONCE), corrects a gene mutation that is responsible for a range of diseases of the eye which cause progressive blindness. A mutation in the gene RPE65 means that the body cannot produce a protein essential for the working of the photoreceptors in the retina.

Luxturna is injected into the retina by an ophthalmic surgeon, which – along with the cost of development – helps to explain the almost $1m price tag ($475k per eye). It is not a cure, but substantially improves vision in patients who would otherwise develop night blindness and a loss of peripheral, then central, vision.

In 2018, we find ourselves on the threshold of an explosion in the world of gene therapy. It seems that suddenly, there are many new gene therapies about to come into commercial therapeutic use.

Haemophilia is a genetic disorder: a single gene mutation means an inability to produce one of the proteins necessary for blood to clot. There are at least two companies (Biomarin and Spark Therapeutics) that are bringing to market gene therapies to cure either Haemophilia A or B (which differ in the gene affected).

Biomarin (Nasdaq: BMRN) has licenced a treatment for haemophilia A from the commercial arm of University College, London, which is in the process of bringing it to market.

In March, Amryt Pharma made its announcement on epidermolysis bullosa from University College Dublin. It already has a conventional therapy in the pipeline for EB and sees the two approaches working in tandem. The conventional treatment, if approved, will treat patients’ wounds and manage pain, itch and infection.

The gene therapy, on the other hand, is designed to alter the underlying cause of the disease and offers the potential for long-term curative treatment in a specific subtype of the disease, recessive dystrophic EB.

This therapy is unusual in that it doesn’t use a viral vector. Instead, it will utilise a delivery system that enables it to be topically administered via a tube and broadly applied over all the skin.

Amryt CEO Wiley said this gave the company “a potential platform technology, with an initial topical application in EB, that does not rely on the use of viral vectors” for the delivery of gene therapy.

“If successful, this platform has the potential to be broadly applicable in other dermatological conditions, and possibly beyond,” he said.

There are several companies working on gene therapies for haemophilia and various rare eye diseases, and gene therapy treatments in clinical trials for about 50 diseases.

Voyager Therapeutics (Nasdaq: VYGR) is a company that specialises in gene therapy, as well as other biotechnology techniques, to treat neurological diseases. Since the Central Nervous System (CNS) is made of cells (neurons) that are long-lived and don’t age or divide, therapies that would be temporary fixes in other parts of the body can in these cases be long-term or even permanent cures.

In the pipeline are treatments for Parkinson’s Disease and Alzheimer’s, amongst others. The Parkinson’s treatment is most advanced, although still at the Phase 1b trial stage. It doesn’t claim to be a cure, principally because Parkinson’s isn’t caused by a single genetic mutation.

There is a drug, levodopa, which treats the symptoms of Parkinson’s once it is processed into dopamine by a certain type of neuron. But the efficacy of this drug is reduced over time, as these neurons lose the ability to process it.

The mechanism of the gene therapy treatment is to deliver the gene that confers the ability to process levodopa directly to the neurons that need the dopamine.

In other promising research, the University of Florida is working on gene therapy that could fight a rapidly progressing form of Multiple Sclerosis (MS). The research is at an early stage, but initial trials on mice with autoimmune encephalomyelitis (a condition of the spinal cord similar to MS, and used in early trials) look promising.

Doctor Brad E. Hoffman of the University of Florida said, “a realistic time for initial Phase I trials would be two-plus years”.

Another new development for 2018 is the rise of ancillary industries around gene therapy. These include companies that are gearing up to create the virus vectors needed by the companies making the therapies. In February, two collaborating UK companies, Cobra Biologics and Symbiosis Pharmaceutical Services, were awarded a government grant to develop capabilities for clinical and commercial production of gene and immunotherapy viral vectors.

Specialist companies in the conventional pharmaceutical industry are also getting involved. World Courier, a subsidiary of AmerisourceBergen Corporation (Nasdaq: ABC), is a global logistics firm which specialises in the transport of biological materials.