The ‘Lion City’ is roaring again

IN the heart of downtown Singapore, Raffles Hotel, a stately symbol of colonial splendour, sits in the shadow of a gleaming jungle of high-rise concrete and steel, like a demure maiden aunt at a rowdy wedding. 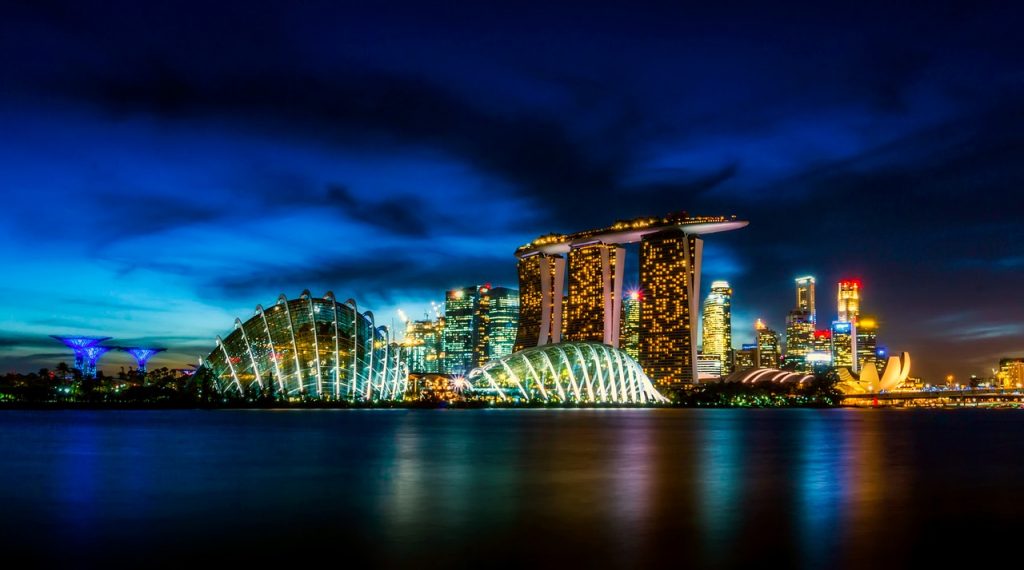 The sedate, white-washed hotel, once the haunt of chaps in pith helmets and elegant ladies glowing in the heat, is a reminder that this corner of south-east Asia was once a jewel in Britain’s imperial crown. They still drive on the left in Singapore. One might assume that this is where the similarity with the old country ends.

That’s not entirely true. The British legacy in Singapore also includes its system of parliamentary government and its legal structure – but both have been given a particularly Singaporean twist.

Today, Singapore is a confident and prosperous nation whose achievements belie its tiny size. More than five million people squeeze themselves into the 278 square miles of the island – the world’s third most densely occupied state.

The fall of Singapore to the Japanese in 1942 was not only the biggest defeat suffered by British armed forces in history, it also signalled the end of Britain’s global status. When the invading Japanese troops crashed into Raffles, they found the ex-pats boldly dancing the waltz in the hotel ballroom – a final symbolic act of defiance by the old order.

In the decades following the Second World War, Britain began the long process of disposing of its possessions and its influence, east of Suez. And as the sun finally set on the British Empire, Singapore stepped uncertainly on to the world stage as an independent nation.

Its early days were inauspicious. An initial plan to become part of a Malayan confederation ended in ignominy when Singapore was ejected by its neighbours following conflict over the federation’s racial strategy, which favoured the native Malay population. Singapore’s ethnic identity had been mixed since its foundation in the 1600s. In greater Malaysia, those of Malay descent were unhappy with the influence of the ethnic Chinese, most of whom were urban and entrepreneurial – and mostly living in Singapore.

So Singapore, a country the same size as the island of Anglesey, decided to go it alone. Despite the odds, and within a generation, the country had ditched its Third World tag to become the financial powerhouse of south-east Asia’s economic revolution.

In the decades since the 1960s Singapore has developed a free-market economy that is the envy of many developed countries. It has acquired a reputation, not only as an open economy, but one which is almost entirely free from the sort of corruption which bedevils many others in south-east Asia.

Prices are stable, and unemployment, at 2%, is negligible. Inflation hovers around 1%, and per capita GDP is a healthy $83,100. Singapore’s debt-to-GDP ratio, at 103%, may look unfavourable, but this Asian economic dynamo is in good shape. Singapore has no significant external debts; like Japan, it is a debt creditor, and its own debts are almost entirely internal and therefore easily managed.

Since independence in 1965, the economy has developed at rapid speed, due mainly to its leaders’ adoption of an outward-looking strategy. It moved away from labour-intensive industry to a service economy, and attracted an increasing share of external investment to its business and finance sectors.

The deliberate decision of the Singaporean government to pursue a long-term approach to achieving a balanced economy, created even greater international confidence in its institutions. Singapore’s foreign reserves means the country has one of the strongest sovereign credit ratings in the world.

At the same time, Singapore’s education system, which regularly puts the country at the top of world educational achievement rankings, ensures that the economy can rely on a skilled workforce of the highest quality.

Singapore is also a major global transport hub. International flights from east and west touch down on the island state, making tourism a lucrative industry. In its dash to prosperity in the 1970s and 80s, Singapore bulldozed much of its colonial heritage to make way for swanky skyscrapers. Just in time, it took a step back. Today several areas of the city have been gentrified, preserving some of that imperial architecture in the form of palm-fringed bungalows and colonnaded shop-fronts with their mix of Indian, Malay, Chinese and British styles – the vision of Singapore’s original designer, Sir Stamford Raffles in the 1820s.

Singapore depends on its exports – especially consumer electronics, IT, pharmaceutical and, of course, finance. This dependence upon global trade, however, comes with a risk. Singapore is susceptible to the fluctuations of the world economy. In the last three years it has achieved lower than expected growth, mainly due to a global fall in demand.

But such is the confidence of this little country that it refuses to be intimidated by the perils that may lie ahead in turbulent global seas. Far from being complacent about its current strength, Singapore is already mapping out routes to avoid trouble.

The foundations being laid today, in ensuring that the education system is redoubling its focus on technology, in improving productivity, and expanding into new markets, will enable Singapore to quickly adapt to changes in the world economy over the next decade.

Singapore isn’t without its critics, though. It doesn’t score well on the international rankings for freedom of speech, and maintains strict control over press freedom, for instance. It retains mandatory capital punishment for murder and some drug trafficking offences, and per capita, has one of the highest execution rates in the world. Homosexuality remains a crime, and detention without trial is still used to imprison political agitators, according to Amnesty International.

In 1963 Singapore’s censors banned the song “Puff the Magic Dragon”, believing the popular ditty to refer to the smoking of cannabis. More recently, the Katy Perry hit, “I Kissed A Girl”, was banned for its promotion of homosexuality.

Before he died in 2015, Lee Kwan Yew, the Cambridge-educated barrister who led his country for four decades, said that Singapore’s only asset was its people. “If Singapore is a nanny state, then I am proud to have fostered one,” he said.

They still mix a good Singapore Sling – the famous gin-based cocktail invented at the height of the British Empire – in the Long Bar at Raffles Hotel. Those sipping the exotic drink are no longer sun-burnt old colonels and their lady wives – they’re more likely to be a new breed of local entrepreneur, probably toasting the continued triumph of the Singaporean economic miracle, and looking forward to even greater success.