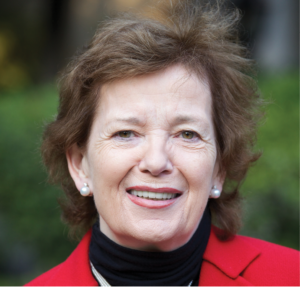 Lawyer, legislator, social reformer, politician, and UN High Commissioner, Mary Robinson has been a powerful force for change in her native Ireland and across the globe.

As she celebrates her 70th birthday, Mrs Robinson can look back on an extraordinary career and reflect on her influence in the transformation of Ireland and her contribution to the advancement of human rights across the globe.

Mrs Robinson came to prominence in 1990 when she rose above factional in-fighting to become the first woman president of Ireland. She proved to be a popular incumbent whose legal knowledge, intellect, and political experience brought a new gravitas to the role.

Her education and early career saw Mary Bourke do a law degree at Trinity College, Dublin, and King’s Inns. After studying at Harvard Law School, she was called to the Dublin Inner Bar and appointed Reid Professor of Law at the college. In 1970, she married a fellow lawyer Nicholas Robinson – a protestant and subsequently the cause of some rifts within the bride’s catholic family.

In the 1960s and 70s, Ireland remained staunchly catholic which was reflected in its rigid and prescriptive constitution. Mrs Robinson became one of the University of Dublin’s three senators and campaigned on a wide range of human rights issues. She advocated changes to the constitution to bring it in line with more relaxed modern social attitudes including removing the ban on divorce, eliminating the prohibition on contraceptives, and decriminalising homosexuality and suicide. She campaigned for the right of women to sit on juries and for the abolition of the requirement that women must resign from the civil service upon marriage.

Elected in 1997, Mrs Robinson proved to be a tremendously active, effective, and popular president. She reached out to Irish groups across the globe and put a very visible symbolic light in the window of the presidential residence as a sign of remembering Irish emigrants around the world.

That same year, she was appointed the second United Nations High Commissioner for Human Rights, heading up the international agency established to promote and protect the human rights that are guaranteed under international law. During her tenure at the UN, she criticised the use of capital punishment in the USA and her native Ireland’s immigration policy.

She extended her UN term by a year to preside over the controversial World Conference against Racism 2001. The United States and Israeli delegations withdrew from the conference in response to a draft document equating Zionism with racism. In the event, the conference was eclipsed by the terrible events of 7/11 which took place a couple of days later, irrevocably changing international relations.

Mrs Robinson lost the support of the United States as High Commissioner and resigned her UN post the following year and formed Realising Rights: The Ethical Globalisation Initiative. Its objectives were to foster equitable trade and decent work, to promote the right to health and more humane migration policies, and to strengthen women’s leadership and encourage corporate responsibility.

In 2010, Mrs Robinson retired to Ireland and set up The Mary Robinson Foundation – Climate Justice. This is a centre for thought leadership, education, and advocacy on the struggle to secure global justice for people vulnerable to the impacts of climate change: the poor, the disempowered, and the marginalised.

Mrs Robinson is the chair of the Institute for Human Rights and Business and Chancellor of the University of Dublin. She lectures in International Human Rights at a number of universities and sits on the board of a number of organisations. She has received a slew of awards for her work in the field of human rights.

In 2009, she was awarded the United States’ highest civilian honour – The Presidential Medal of Freedom. President Barack Obama said of her: “As an advocate for the hungry and the hunted, the forgotten and the ignored, Mary Robinson has not only shone a light on human suffering, but illuminated a better future for our world.”

After recently celebrating her 70th birthday, she shows no sign of slowing down and now actively campaigns for rich countries to help developing nations move away from fossil fuel and make the transition to renewable energy.