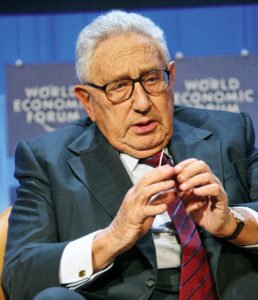 Heinz Alfred Kissinger is a creature of habit. Even though he turns 93 in May, his routine most weekends is pretty much the same: checking on the scores from the German football league and, in particular, the result for his boyhood club Greuther Fürth.

Although so engrained in US politics that few Americans would even know he was originally from Germany, Mr Kissinger’s devotion to a tiny Bavarian football club playing in the second tier Bundesliga is an indication that a man who, to many, commands the status of both hero and villain, is furiously loyal.

It is that loyalty – to both his adoptive country and the controversial president who once led it – which has shaped his standing as both a revered political superstar and curiously-irreproachable brigand in equal measure.

No matter what your opinion of Henry Kissinger – he changed his first name from Heinz after fleeing Nazi Germany in 1938 – there can be no doubt that, as a political figure, he was a masterful strategist who orchestrated some of the world’s most historic agreements. It seems almost a shame that his name is also entwined with some of the less glorious pages of America’s history books.

In 1973, at the height of his power, Mr Kissinger was awarded the joint Nobel Peace Prize, together with Vietnamese negotiator Le Duc Tho. The pair were hailed as being responsible for bringing the Vietnam War to a close.

It was viewed as the pinnacle of an industrious period for Kissinger which had seen him instigate landmark agreements with the Soviet Union, broker deals that opened the door of Chairman Mao’s China, and set out the peace treaty between Israel and Egypt following the Yom Kippur War. In short, he wasn’t just instrumental in preventing catastrophic conflicts, but in doing so, he actually changed the world for the better.

For instance, his remarkable ability to create dialogue with the US and China was touching on the miraculous. Mr Kissinger had been trying since late 1970 to establish some form of communication with the Chinese – it had been a long-held desire of Nixon to improve relations with Beijing in order to curtail what was regarded as a clear and present nuclear threat.

Mr Kissinger, however, could see further advantages in China. In his mind, creating positive dialogue with the Chinese was also a way of gaining a potential ally over Moscow. At the time, the Sino-Soviet relationship was becoming increasingly tense. If Kissinger could get his president into discussions with the Chinese, it would open up another front for the US in the Cold War.

One of Kissinger’s great political trademarks was secrecy. Unsurprisingly, he went to Beijing to meet with his opposite number – Zhou Enlai – with only a handful of top government officials knowing about the visit. Even the US ambassador to the UN at the time – a certain Mr George Bush Senior – was unaware of the clandestine proceedings. A few months after Kissinger’s meeting, Richard Nixon landed in Beijing, had an audience with Zhou Enlai and Mao Zedong, and the course of world history took a turn.

His obsession with covertness may have helped him smooth the waters on numerous occasions, but it certainly hindered his status in the eyes of his many critics. Carpet bombing in Cambodia, and the apparent collusion with some questionable regimes in Indonesia, Pakistan, and Greece all led to Mr Kissinger’s naysayers labelling him a war criminal. Add to that the involvement of the CIA in bringing Chilean dictator Augusto Pinochet to power in 1973, and you quickly get to see why many Americans believe allegations of dark forces being controlled by Mr Kissinger may indeed be a smoking gun.

But no matter how many accusations have been levelled at him, precious few have stuck. Even during Watergate, as Nixon sank, Mr Kissinger was still pulling the strings at Capitol Hill. He would continue to do so well into the presidency of Gerald Ford. Throughout all the scandals that erupted around the White House, and even those which touched his own door, Henry Kissinger’s devotion to duty on American foreign policy remained steadfast.

He once famously said that “90% of politicians give the other 10% a bad reputation.” Which category Mr Kissinger falls into will remain a subject of much debate for years to come.