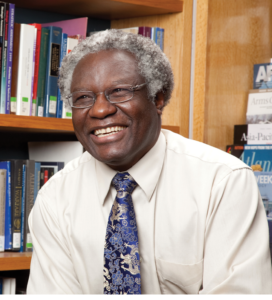 In western countries, the genetic modification of crops is often seen as a threat to the environment. Professor Calestous Juma takes a contrarian view: he is a keen advocate of biotechnology and its potential to transform African economies. The dynamic professor believes that genetic engineering can become the engine of growth for Africa much in the way that Japan and South Korea transformed their economies forty years ago by embracing the transistor.

In Africa, around three quarters of the population works the land, often struggling to make a living. Prof Juma points out that biotechnology can improve productivity in a number of ways such as controlling pests which then leads to a reduced use of pesticides. Biotechnology can also help reduce the amount of back-breaking work as it allows crops to be grown without the constant ploughing now required to keep weeds in check.

Energetic, creative, and optimistic, Prof Juma is an authority on the application of science and technology towards the promotion of global sustainable development. He is regularly named as one of the most influential Africans. Prof Juma runs a course on the practice of international development at Harvard Kennedy School of Government and is director of the Agricultural Innovation in Africa Project that receives funding from the Bill and Melinda Gates Foundation.

Prof Juma grew up in a farming village on the Kenyan side of Lake Victoria. When he was nine years old, the village farms were devastated by a flood. Faced with a need to eke out a living from a smaller plot, Prof Juma’s enterprising father suggested farmers switch to cassava, a starchy carbohydrate-rich tuber that was not usually grown in the area.

The introduction of the new crop was controversial. Many local farmers were initially suspicious of the new plant and quite reluctant let go of more traditional crops. However, the innovators prevailed and cassava soon became a staple. Prof Juma took a life-long inspiration from his father’s foresight and willingness to innovate.

As a young man, Calestous Juma gained a reputation for being an inquisitive and practical tinkerer who enjoyed experimenting. He established a small business repairing broken radios and record players. At the age of nineteen, Calestous Juma became an elementary school science teacher in Mombasa. The young educator used his spare time to write letters to local newspapers on a wide range of topics. This eventually landed him a job as a science and environment reporter at the Daily Nation.

A year later he was poached by a Nairobi-based environmental group funded by the Canadian International Development Agency to launch their new magazine. This job not only led to a wide range of new contacts, but also landed the journalist a scholarship at the University of Sussex where he gained a masters and a doctorate in science and technology policy.

Once back in Nairobi, Calestous Juma established the Africa Centre for Technology Studies – the continent’s first think tank to apply science and technology to development issues. His meteoric rise to international prominence continued when in 1995 he was hired by the United Nations to become the executive secretary of the Convention on Biodiversity.

The convention, a global commitment to sustainable development, came into force at the end of 1993. Key strands are the conservation of biological diversity, the sustainable use of its components, and the fair and equitable sharing of benefits arising from the use of genetic resources. In 1996, the convention established its permanent home in Montreal and Prof Juma moved to Canada. Two years later, he moved to Boston to take up a fellowship at Harvard.

Around the time that Prof Juma moved to Northern America, the first commercial GM crops were planted in the US and genetic engineering became a hot topic. Many environmentalists argued that genetic modification of crops could harm the environment and only benefitted multinationals and industrial farms. Prof Juma disagrees, decrying the “technological intolerance” that has hampered the introduction of bio-engineered crops in Africa.

Prof Juma believes that, as latecomer to new technology, Africa can learn from other countries’ mistakes and move forward, merging innovation and sustainability and developing new strains of crops engineered to thrive on the continent. In the same way that much of Africa has embraced mobile phones, Prof Juma argues that biotechnology can boost growth and eradicate poverty.