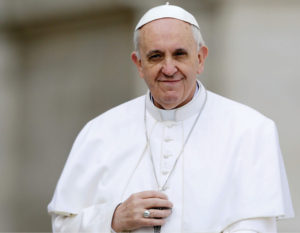 At an age when most people would gratefully embrace retirement, Jorge Mario Bergoglio became the CEO of a high-profile global organisation facing major challenges. Elected pontiff of the Catholic Church in March 2013, Mr Bergoglio became Pope Francis and went on to shake-up the church he inherited. Without even trying, he immediately established an impressive number of firsts: first Jesuit pope, first pope from the Americas, first pope from the Southern Hemisphere, and first pope to take the name Francis in honour of St Francis of Assisi, the champion of the poor.

Pope Francis succeeded Benedict XVI – aka God’s Rottweiler. Joseph Ratzinger, the first German pope for over a thousand years, made history by taking up retirement. Popes usually serve faithfully until god calls them to his/her side. Benedict XVI succeeded Pope John Paul II in 2005. A cerebral disciplinarian true to Teutonic tradition, he clung to rather conservative views and strictly enforced Catholic orthodoxy.

During his time as head of the Congregation for the Doctrine of the Faith – formerly known as the Inquisition – then-Cardinal Ratzinger returned the office to its former glory. It soon became the most feared of the nine congregations of the Roman Curia, denouncing secularisation, liberation theology, radical feminism, homosexuality, religious pluralism, bioethics, and a host of other phenomena and activities deemed deviant. Ratzinger showed no mercy to liberals, dissidents, and other assorted rebel rousers: he ruthlessly ordered the unrepentant, such as Brazilian theologian Leonardo Boff, removed from their positions and silenced.

In the guise of Benedict XVI, Ratzinger stuck to his theological guns, training his sight on anyone daring to question or disagree. As a result, the papacy failed to address a number of serious challenges besetting the Vatican. Outdated edicts on priestly celibacy, contraception, abortion, and homosexuality were strictly applied while wholesale child abuse by the frocked was duly swept under the carpet.

The new pope, noted for his humility, has taken a radically different approach to the job. First off, he flatly refused to move into the Apostolic Palace – the official papal residence oozing grandeur and opulence (think Borgias) – choosing instead to occupy a sparsely decorated suite at the Domus Sanctae Marthae, a drab building adjacent to St Peter’s Basilica that serves as guesthouse for minor clergy having business at the Holy See.

Pope Francis prefers to serve the poor rather than wield his doctrinal powers. He also made a bold fashion statement, still reverberating throughout the church, by donning supremely simple garb rather than the ostentatious outfits his predecessors sported.

Though the church’s decision-making process is a notoriously ponderous one, Pope Francis – famously impatient with the demands of protocol and sanctified due process – cut through all red tape to tackle some of the more pressing issues faced by the Vatican. If that didn’t ruffle enough feathers, he also brought in outsiders to inspect the books.

The Institute for the Works of Religion, the Vatican’s own bank, has long been mired in scandal. Until recently, the bank was considered the world’s largest money laundering operation. Its books had been cooked for years while those at the top – all properly robed – were widely considered experts in creative accounting. In one of his first acts as holy father, Pope Francis brought in top US financial experts and forensic accountants to investigate all the bank’s operations and determine the extent of the malfeasance. Pope Francis ordered his team to ignore hierarchical convention and keep him directly appraised of its findings. The bank’s management has since been purged and its operational processes overhauled.

The biggest skeleton Pope Francis found in the proverbial closet was, of course, the sex scandal involving hundreds, if not thousands, of priests, bishops, and other clerics who for decades on end abused their power and their congregation’s children. Pope Francis promptly apologised for the Vatican’s past handling of the scandal and promised that all those charged with child molestation will be held accountable – here on earth rather than up there.

It is an honourable, though risky, proposition for the Vatican risks exposure to lawsuits across the globe that could potentially cost the church billions in damages. In the US alone, the Catholic Church in 2013 disbursed close to $120 million to settle lawsuits brought against it by victims. In 2014, the Vatican for the first time prosecuted a former high-ranking prelate accused of sexually abusing young boys. Josef Weslowski, a former archbishop, was defrocked. He passed away while awaiting trial.

Pope Francis has also jumped onto the climate change bandwagon, calling in his only encyclical to date for an ethical and economic revolution to prevent global warming and reduce inequality. In a visit to the US, he reiterated and expanded his call to action, rallying against capital punishment and the mistreatment of immigrants during a joint meeting of the US Congress that brought tears to the eyes of some of those present.

The now 78-year-old pope seeks to balance tradition against the need for change in order that his church may thrive in the decades to come. He clearly envisions an institution less concerned with maintaining doctrine and more with fighting for social justice. Pope Francis is combative enough to pull it off too.