PEOPLE have been racing camels on the plains that envelope Abu Dhabi for centuries, and in the Arab states of the Persian Gulf the sport is more popular than any kind of horse racing you might find anywhere in the world. 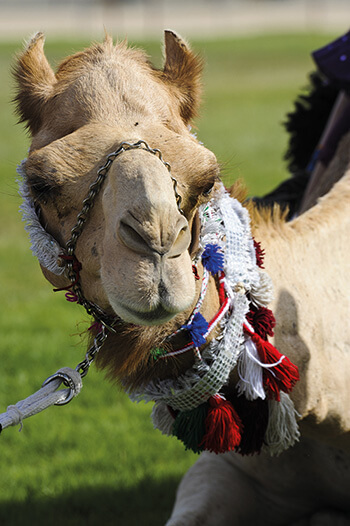 A recent government-backed report discovered that syndicated ownership of racing camels stretched to most households in the state. Entire families have stakes of various worth in the animals, with shares often being given as presents for birthdays and new births.

What doesn’t appear normal, however, is the jockey. It isn’t a child jockey any more, after concerns for the safety and welfare of the youngsters used to pilot the gangling beasts. It is a contraption containing a motor from a Bosch drill. Duct-taped to this is a wireless receiver. He puts a brightly-coloured lid over the components, then attaches a plastic arm to the side of the box. To the untrained eye, it looks like a junior school art project where the brief was decorate a biscuit tin and glue a stick on it.

And while it may not look like much, this biscuit tin has been the decisive factor in bringing camel racing back from the dead and returning it to the pinnacle of sport-related business in the Middle East.

Camel racing has been in serious decline. After centuries of mass popularity the governments of most Middle East nations brought in legislations to regulate the sport. The main aim of the laws was to put a stop to the child deaths which had blighted camel racing throughout much of its history.

Grown men are too heavy to allow a camel the freedom to run to its maximum potential, so children as young as five were often employed as jockeys. The practice was outlawed in 2002, and the sport fell into stagnation.

Jockey-less trials were held, with instructions shouted to the camels from the great cavalcade of cars which career along specially-built roads parallel to the track. Races lost their appeal until, three years ago, a few bright sparks pulled together an experiment to see if they could recreate the effect of a jockey using a robot.

At first, the elder members of the camel racing community mocked the idea, but, gradually, the robots were refined until the thrill of the old races was more or less matched or replaced by the well-dressed biscuit tins.

Today, the crowds have returned to the levels experienced pre-legislation. The purses and the amount of cash flowing around the business of the sport however, have almost doubled and the revenues of enterprises connected with camel racing have rocketed.

One market which has seen an astonishing surge in revenues is honey production. The finest, most expensive camels are fed up to a kilogram of honey a day, with some batches costing in the region of 11,000 dirhams ($3,000) a kilo.

Race lengths vary – dependant on the camels’ age – from 1.5 kilometres and eight kilometres. Between races the camels are fed special supplements and trained with cardio and strength work. And it pays off – for everyone.

The average stable costs for a race-ready camel come in at around 5,000 dirhams ($1,300) a month and with that comes all the paraphernalia one would expect from a thoroughbred stable – trainers, dieticians, transport.

Then there are veterinary services. The number of vets in the UAE over the last ten years has risen three-fold; in a bid to safeguard the integrity of the sport, every camel registered to race is blood tested on a weekly basis.

Although the robots and controls are typically home-made by the handlers, robot jockeys and devices can now be purchased off-the-shelf for about 5,500 dirhams.

The robots have a speaker through which the handler can bark their orders at the camel via their hand-held microphone, and a whip is operated remotely by the handlers who cling onto the back of pick-up trucks in the cavalcade.

The horde of vehicles is almost as fascinating to witness as the camels being ridden by robots. Beat-up Nissans kick up the same dust as the vehicles of the excited wealthy observers who join the melee in vehicles bearing Bentley, Lamborghini, and Rolls Royce badges.