Oil prices are forecast to rise to $56 a barrel in 2018 from $53 this year as a result of steadily growing demand, agreed production cuts among oil exporters and stabilizing U.S. shale oil production, while the surge in metals prices is expected to level off next year, the World Bank said on Thursday.

Prices for energy commodities – which include oil, natural gas, and coal — are forecast to climb 4 percent in 2018 after a 28 percent leap this year, the World Bank said in its October Commodity Markets Outlook. The metals index is expected to stabilize in the coming year, after a 22 percent jump this year as a correction in iron ore prices is offset by increased prices in other base metals. Prices for agricultural commodities, including food commodities and raw materials, are anticipated to recede modestly in 2017 and edge up next year.

“Energy prices are recovering in response to steady demand and falling stocks, but much depends on whether oil producers seek to extend production cuts,” said John Baffes, Senior Economist and lead author of the Commodity Markets Outlook. “Developments in China will play an important role in the price trajectory for metals.”

The oil price forecast is a small downward revision from the April outlook and is subject to risks. Supplies from producers such as Libya, Nigeria, and Venezuela could be volatile. Members of the Organization of the Petroleum Exporting Countries (OPEC) and other producers could agree to cut production further, maintaining upward pressure on prices.

However, failure to renew the agreement could drive prices down, as could increased production from the U.S. shale oil industry. Natural gas prices are expected to rise 3 percent in 2018, while coal prices are seen retreating following a climb of nearly 30 percent in 2017. China’s environmental policies are anticipated to be a key factor determining future trends in coal markets.

Iron ore prices are forecast to tumble 10 percent in the coming year but tight supply should push up prices for base metals including lead, nickel and zinc.  Downside risks to the forecast include slower-than-anticipated demand from China, or an easing of production restrictions on China’s heavy industries.

Gold prices are anticipated to ease next year on expectations of higher U.S. interest rates.

Agriculture prices are expected to edge up in 2018 due to reduced supplies, with grain and oils and meals prices rising marginally. Agricultural commodities markets are well-supplied and the stocks-to-use ratios (a measure of how well supplied markets are) of some grains are forecast to be at multi-year highs.

However, favorable weather patterns, well-supplied global food markets, and relatively low world prices do not necessarily imply ample food availability everywhere. Drought conditions that are by some accounts the worst in 60 years, have caused crops failures in parts of Ethiopia, Somalia and Kenya and led to severe food shortages. Conflicts in South Sudan, Yemen and Nigeria have driven millions of people from their homes and left millions more in need of emergency food. 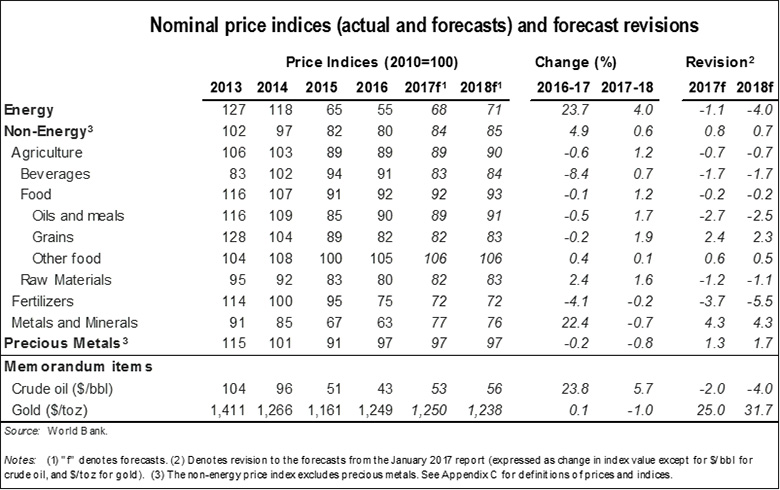