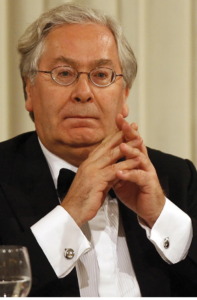 During his time as governor of the Bank of England, Sir Mervyn King – now Lord King – had a habit of using sporting metaphors to make a point.

He has advanced the opinion, for instance, that countries in the Eurozone would benefit from a football-style promotion/relegation system to achieve successful monetary union, saying that premature promotion can be a misfortune, while relegation often offers the opportunity of a new start.

Earlier this year, Lord King got a taste of the real thing – taking a seat in the boardroom of Aston Villa as the football club, which he has supported since boyhood, plunged headfirst into the void.

Lord King didn’t cope quite as well at Villa Park as he had in Threadneedle Street during his ten years at the helm of the UK’s central bank. He quit after just two months.

Mervyn King might be described as a reliable defender who is sometimes deceived by the speed of the ball. His critics certainly believe he was slow to react to the looming economic crisis of 2008. Some even blame him, and his American counterpart Alan Greenspan, for the housing bubble which, once it burst, resulted in the worst global crash since the Great Depression of the 1930s.

Messrs King and Greenspan watched passively as the bubble inflated on either side of the Atlantic. Neither did much to prevent it or produce strategies to soften the blow when it fell. Lord King said later: “There were imbalances – we knew things were unsustainable – but it was not entirely obvious where it would come unstuck.”

With his owlish appearance and soft voice, Lord King presented a reassuringly avuncular, trusted face to the British public which may be why Gordon Brown, the then prime minister, reappointed him for a second term as BoE governor on the eve of the banking crisis. But those who served alongside Lord King usually describe a much tougher character. Indeed, he was called a tyrant by David Blanchflower, one of his colleagues.

Mr Blanchflower, a British-born American-based economist who was co-opted by Prime Minister Brown on to the Monetary Policy Committee of the bank in 2006 – against Lord King’s wishes – is scathing about the governor’s stewardship: “He controlled the bank with an iron fist, slaying any dissenters in his path.”

Lord King was also accused of meddling in politics when he criticised the policies of Labour chancellor Alistair Darling in the run-up to the 2010 general election, while openly supporting the cost-cutting proposals of the incoming Conservative-Liberal coalition. He denies this, insisting that the Labour government was not responsible for the crash. There was a shared responsibility, he says, across the political parties and financial institutions for failing to foresee the problems.

Since leaving the Bank of England in 2013, Lord King has been appointed a life peer and has written a book – The End of Alchemy: Money, Banking, and the Future of the Global Economy – warning that if the financial system is not reformed, the world faces another economic crisis. He also holds forthright views on European monetary union which, he predicts, will lead to disaster if current directions are not changed.

Lord King may have left the pitch, but is still busy dispensing mostly unsolicited advice from the side lines.