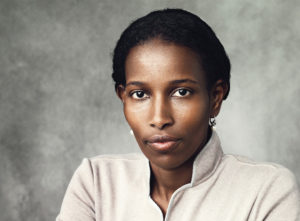 Her life has been an extraordinary journey across varied political, cultural, and geographical landscapes. She is beautiful, intelligent, courageous, and quite outspoken.

Author, campaigner, politician, film-maker, apostate, politician, and lecturer – Ayaan Hirsi Ali’s many incarnations have taken her from a religious upbringing in Somalia, via sojourns in East Africa and Saudi Arabia, to seek refuge first in The Netherlands and then in the US where she currently resides with her new husband and their young son. Despite living under a fatwa, Mrs Hirsi Ali remains an outspoken polemicist and campaigner.

Articulate, reasoned, yet forthright, Mrs Hirsi Ali is never far from controversy. Her books chart an amazing journey. In 2006, The Caged Virgin: A Muslim Woman’s Cry for Reason was published in The Netherlands where she was living at the time. This debut was followed in 2008 by the autobiographical Infidel. Three years later, driven out of Europe by a fatwa and securely settled in the USA, she wrote Nomad: From Islam to America, a Personal Journey through the Clash of Civilisations.

Her latest book Heretic, published earlier this year, argues that a Muslim Reformation sorely needed to end the horrors of terrorism, sectarian warfare, and the repression of women and minorities.

Ayaan Hirsi Ali was born in Somalia in 1969, the daughter of Somali opposition leader Hirsi Magan Isse and his wife Asha Magan. As the child of devout Muslims, she underwent female genital mutilation at the age of five. Her family fled the fighting in Somalia and Ayaan received her education at a Muslim girls’ school in Nairobi. In 1992, she arrived in The Netherlands where she applied for – and was granted – asylum on the grounds that she was fleeing from a forced marriage.

Ms Hirsi Ali promptly threw herself into Dutch society. She worked at various jobs, learned the language, studied social work, and in 2000 took a postgraduate degree in Political Science at Leiden University. Her work experience included translating at asylum centres and hostels for abused women, and working as a researcher with the Wiardi Beckman Foundation – the Labour Party’s think-tank.

While in 1989 Ms Hirsi Ali had supported the fatwa against British author Salman Rushdie, the 9/11 attack reinforced her growing disenchantment with Islam and by 2002 she had become an atheist. Ms Hirsi Ali subsequently developed a detailed critique of Islam.

In 2003, Ms Hirsi Ali was elected to the Dutch House of Representatives as a member for the right-of-centre liberal People’s Party for Freedom and Democracy (VVD). Ms Hirsi Ali collaborated with film director Theo van Gogh on Submission, a short and highly controversial film about the oppression of women under Islam. The next year, Mr Van Gogh was stabbed to death on an Amsterdam street by a Jihadist who pinned a threat against the life of Ms Hirsi Ali on his victim’s chest. This traumatic event drove her into hiding for two months. To this day, she is forced to retain the services of a 24-hour armed security detail.

Already in 2002, Ms Hirsi Ali admitted on a television talk show that she had used a false name on her asylum application. At the time, nobody paid much attention to this revelation. Four years later, she again admitted on-camera to giving the immigration authorities misleading information regarding her identity and places of residence before arriving in The Netherlands.

This time, a political storm blew up and Ms Hirsi Ali lost her seat in parliament and her Dutch citizenship – which was later restored. She subsequently moved to the US to take up a position at the American Enterprise Institute, a Washington-based conservative think-tank. In 2007, she founded the AHA Foundation which works to end honour-driven violence against women.

Unsurprisingly, her latest book Heretic has proved controversial. In it, she argues that Islam is not a religion of peace but rather one that foments terrorism, breeds sectarian conflict, and sanctions the repression of women and minorities. The book seeks to identify what must change in Islam to separate politics from religion and bring about a peaceful and tolerant faith – and how the West might hasten this process of modernisation and secularisation. Heretic urges an Islamic version of the Reformation followed by enlightenment and the Age of Reason which happened in Europe centuries ago.

Naturally, her latest book has provoked heated debate and polarised opinion. Ms Hirsi Ali believes that the West’s dalliance with multiculturalism threatens its secular society and strong measures are needed to counter the growing threat of the bigotry, barbarism, and butchery manifested by modern-day extremist cults.

“When you live the way I do,” she told CNN after the Charlie Hebdo massacre in Paris, “you have to ask yourself over and over: who are these people that try to kill me? What do they want? What drives them? This is not a group of deranged thugs. It’s an ideology embedded in a world religion. For me to be safe, I have to outlive a generation whose minds are contaminated with it.”