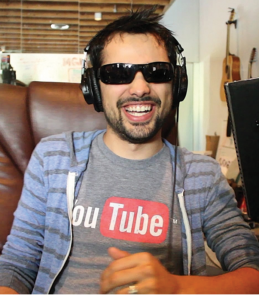 The recent rise of video-sharing sites such as YouTube and Vimeo have allowed low budget independent filmmakers to reach millions of viewers. The MysteryGuitarMan has used this medium to become a viral video star.

The YouTube sensation is Brazilian film maker musician and animator Jônatas de Moura Penna. Now living in Los Angeles, Joe Penna is building a highly successful business as a director and writer. His net worth is now estimated at over two million dollars. His best known films are Instant Getaway (2014), Meridian (2012), and Beyond (2015).

Mr Penna started using the video platform nine years ago at the dawn of YouTube. He was making movies using home video equipment. While in college studying to become a doctor, one of his hobby videos The Puzzle received almost one million hits on YouTube. This made him think that it might be possible to turn his passion for making videos into more than just a hobby. He started entering his makeshift videos into competitions. One won a $15,000 prize which enabled him to buy a better computer and camera.

Although the online video-sharing era was in its infancy, it enabled him to reach a network of people through sharing, sharing, and yet more sharing. The powerful platform was beginning to bring new opportunities to worldwide home movie makers. Mr Penna quit college and set out to produce and publish a new video at least once every week in order to maintain his audience. His quirky videos combine film, special effects, and animations – his film The Puzzle involved 562 edits. Getting hold of professional software was key to speeding up the editing process and maintaining this production schedule.

A turning point in Mr Penna’s career came after he started collaborating with popular YouTube channels. Six years ago, Mr Penna’s video T-Shirt War was loaded onto YouTube. This three minute 47 second film animation, a riff on the subject of T-shirts, led to contracts with advertising agencies for MacDonald’s and Coca-Cola.

“That was the moment I knew I could officially stop stealing my neighbour’s Wi-Fi,” Mr Penna jokes. “It made it okay for me to make videos for a living. Before that, I was very close to moving back home and living in my parents’ basement again. I didn’t want to do that.”

In 2014, New Form Digital commissioned MysteryGuitarMan to make a film as part of its Incubator Series designed to identify up-and-coming talent and provide them with resources. New Form Digital is evidence of traditional Hollywood’s increasing interest in online video innovators and could provide them with pathways to developing projects for film and television projects.

GuitarMysteryMan’s next major project was Beyond, a multi-era tale of time travel and immortality. Mr Penna says he has always been very interested in both topics and he wanted to explore the weight such endeavours would inevitably carry. The project also features a transmedia graphic novel.

Longer and more elaborate films require bigger and better sets. Beyond needed twelve sets to represent different decades. The most ambitious of these is the cabin of a 747, the plane acquired courtesy of YouTube Space LA where the film maker has been working. The film was loaded onto Mr Penna’s YouTube channel in January 2015.

The development of digital video cameras has transformed the film industry and YouTube is changing the way that films are shot, viewed, and distributed. Now living in Los Angeles with his wife and young child, Mr Penna is hot property, tipped as a future potential Oscar winner.