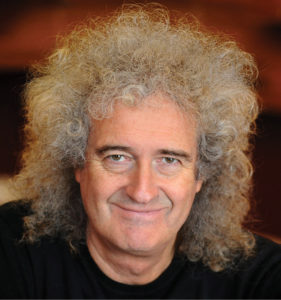 With his mane of ringlets and lean, tall physique and laid back manner, Brian May is every inch the (aging) rock star. However, there is much more to this guitarist than meets the eye. Brian May, CBE, PhD, FRAS (Fellow of Royal Astronomical Society), guitarist, songwriter, producer, performer, and founding member of legendary rock band Queen is also a doctor of Astrophysics, an authority on 3D stereoscopic photography, and a passionate campaigner for animal rights.

Last year, Mr May helped organise Asteroid Awareness Day to tell people about the dangers of asteroid collisions and galvanise research into the field. Mr May and his fellow astrophysicists consider possible asteroid impacts a very real threat to our little blue planet.

In the late Cretaceous Period, some 68 million years ago, a huge asteroid hit the earth. It left a crater with a radius of about 200 kilometres in Mexico’s Yucatan Peninsula. The impact also caused a global catastrophe which led to the extinction of the larger dinosaurs. Scientists believe that asteroids or comets are likely to collide with our planet every ten million years or so.

Asteroid Day took place on 30 June 2015, the anniversary of a 1908 asteroid strike which flattened around 2,000 square kilometres of conifer forest along the banks of the Podkamennaya Tunguska River in a remote corner of Siberia. That day, a huge space rock exploded in the air with a force equivalent to that of a large hydrogen bomb.

“The more we learn about asteroid impacts, the clearer it becomes that the human race has been living on borrowed time,” Mr May says. “We are currently aware of less than one percent of objects comparable to the one featured in the Tunguska Event. Nobody knows when the next big one will hit.”

A strike of similar magnitude could destroy all of London within the M25 perimeter. Smaller space rocks, such as the twenty metre wide meteorite that last year struck Chelyabinsk, a city just east of the Ural Mountains in Russia, are much more common.

Over a hundred astronauts, artists, technologists, and scientists – including Richard Dawkins, Peter Gabriel, Jim Lovell, Lord Martin Rees, and Brian Cox – have co-signed a declaration calling on governments, private companies, and philanthropists to urgently get behind a massive scientific drive to spot and track asteroids with a view to developing techniques for diverting them away from earth.

The first stage of this initiative is already underway: state-of-the-art telescopes scan the night sky for earth-bound asteroids. The Pan-Starrs (Panoramic Survey Telescope and Rapid Response System) in Hawaii continuously surveys the skies for moving and near-earth objects that threaten impact events. The new Large Synoptic Survey Telescope currently being built in Chile’s Atacama Desert will shortly join the hunt for asteroids as small as a hundred metres across.

Ideas for protecting the earth from asteroid impact may often seem whacky, but developing future technology requires serious out-of-the-box thinking. Suggestions include slamming a massive spacecraft into the menacing object to nudge its trajectory clear of earth. Another idea is to fly a spacecraft close to the asteroid to act as a gravity tractor, using its gravitational field to deflect the rock’s trajectory. Asteroid Awareness Day hopes to uncover more interesting ideas for dealing with wayward heavenly objects.

Mr May’s interest in astrophysics is longstanding. In the mid-1970s, as he was studying towards a PhD in Astronomy, Queen shot to the top of the charts. Understandably, Mr May abandoned college for the life of a star. However, in 2006 he returned to update and finish his thesis on the motions of interplanetary dust which earned him a PhD from Imperial College, London. Mr May subsequently accepted a post of visiting researcher at Imperial where he continues his work in astronomy.

In 2006, the former rock start co-authored Bang! The Complete History of the Universe with Sir Patrick Moore and Dr Chris Lintott. The book has now been published in twenty languages and was followed in 2012 by The Cosmic Tourist.

Switching from a star on the charts to charting the stars (and their debris), Mr May has become a regular on the iconic BBC television programme The Sky at Night. The breadth of Mr May’s interests makes him a modern renaissance man – one of the last of his kind.