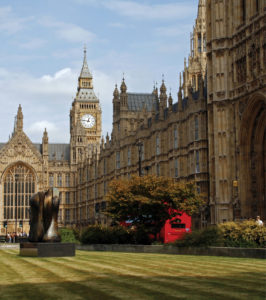 UK Prime Minister David Cameron claims to have negotiated a deal to give Britain special status in the European Union. It would, he argued, be a compromise – a way of getting the “best of both worlds,” while never being part of a “European super-state.”

Whether or not this is the best deal remains to be argued. But why has the UK historically been so keen to distance itself from the rest of Europe?

In the late 19th century, the term “splendid isolation” was coined in regard to Britain’s preference for pretty much ignoring mainland Europe in favour of pursuing its colonial interests. Britain had neither military nor economic needs to ally itself with Europe.

The much-quoted 1930s newspaper headline Fog in Channel, Continent Cut Off, summed it up. With no tunnel linking the two shores, such bad weather meant no traffic between the UK and mainland Europe. But it was the continent that was cut off, and worthy of concern, not the smaller and less productive UK.

This island mentality, in which the UK sees itself as standing alone in the world, in many ways endures today, despite the demise of the empire and the nation’s reliance on others to retain significance. Geographically, of course, the British Isles are separate – they even have a moat (aka the English Channel) keeping the rest of the continent at a distance.

European countries are used to change. Over the last century alone many have been subject to border and regime changes, countries disassembled and reformed with different names, boundaries, and leaders. Britain has enjoyed continuity for hundreds of years. Even if Scotland had opted to leave in the 2014 referendum, borders would have remained unchanged.

The UK occupies a very small area compared with many individual countries in Europe, never mind in its entirety. Perhaps this has led to its fierce territorialism – along with proud history lessons that teach the empire once ruled more than 22% of the world. Yet, it has long seemed wary of others, including its European neighbours, with their many languages and different approaches to socialising, work and, romance.

Even the stereotypes are vastly different. Italian culture is comfortable with men crying and expressing platonic love through kissing; in France, extra-marital affairs are supposedly accepted if not discussed, and in Germany, cleanliness and efficiency are prized above all. Brits, meanwhile, are linked with both emotional restraint – the stiff upper lip and emotional incontinence – the drunken football hooligan.

They love to visit Europe – or even live there – and around two million call it home, a similar number to EU migrants living in Britain. But this often means – much like Mr Cameron’s thinking – taking on the good bits – the weather, cheaper living costs, better food – while rejecting the less-desirable. Language, for example – the British are notorious for only speaking English. Spain, particularly, is full of British enclaves where Spanish is a foreign language.

So Brits may move to Europe or beyond, but when foreigners move there the nation feels uneasy. The language of politicians and the media is one of invasion; of fears they will take jobs, welfare or opportunities, or bring crime, disease, or depression of wages. This threat of invasion is interesting. No foreign army has invaded since the 1066 Battle of Hastings nearly a millennium ago.

Britain also has a great belief in its importance to the world. There are grounds for this – the British Empire, however ruthless and brutal, was the largest in world history. English is the most widely spoken language. The UK’s influence infiltrates cultures everywhere: Shakespeare, The Beatles, the Royal Family, and Harry Potter leave few countries untouched.

Yet it is its special relationship with the USA that is viewed as most important to its security, economy, and standing. The two nations share (variations on) the same language and therefore their cultures, while markedly different, appear more easily merged and exchanged. They fought alongside each other in a number of conflicts, including World Wars One and Two, and the 2003 invasion of Iraq.

However, Britain has had periods of enthusiasm for joining Europe. In 1963 and again in 1967, ambitions were thwarted when French President Charles de Gaulle vetoed Britain’s application to join the Common Market. Belgium, The Netherlands, Luxembourg, Italy, and Germany were happy to negotiate but De Gaulle warned it would break-up the existing European Economic Community (EEC) the six countries made up. He believed Britain needed a radical transformation, and accused it of a “deep-seated hostility” towards European construction and a “lack of interest” in the common market.

At the time, Westminster was disheartened, but made another application in 1969, before becoming a full member in 1973, four years after De Gaulle’s presidency ended.

While in office, then Prime Minister Margaret Thatcher’s relationship with US President Reagan was famously affectionate, yet an approach to German reunification seemed beyond her. Three months after the Berlin Wall fell she brought together historians, anthropologists, and sociologists to educate her on that country’s people. They cited: “Angst, aggressiveness, egotism, and sentimentality,” as archetypical German characteristics.

More recently, in her 2002 book Statecraft, Baroness Thatcher was clearer in her view of Europe as “other,” writing: “Most of the problems the world has faced have come from mainland Europe, and the solutions from outside it.”

Britain is still redefining itself. Once a super-power, it is now unsure of its place on the world stage. It may count last century’s two world wars as victories but the hugely unpopular Iraq invasion was less than fifteen years ago. Its economy remains tentative. And as globalisation continues, forging stronger unions with newer and emerging market players, including the BRICS economies and Korea, Mexico, Turkey, and Iran, may prove prudent. To insist on a “special position,” somewhere between Europe and America, but able to act alone if necessary, is likely arrogant, even foolhardy.

Britain will best grow international influence by adapting to the fast-changing world it is in now and building new relationships, rather than constantly dusting off the old history books.