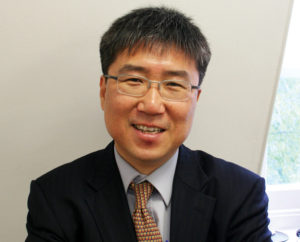 After living in the UK for nearly thirty years, Ha-Joon Chang is not overly impressed by the weather or the national preoccupation with cricket. However, he does like HP sauce and Branston Pickle. Dr Chang, from South Korea, is an institutional economist at the University of Cambridge. He specialises in development economics, and his work has been described as “conducting a guerrilla campaign against economic orthodoxy.”

Dr Chang is no conventional economist: he regards the “dismal science” – a derogatory term for economics coined by the Victorian historian Thomas Carlyle – as a tool for changing the world, rather than for explaining why the world is the way it is. He has collected a number of detractors amongst proponents of more orthodox economic thought who rely on mathematical models. Dr Chang is an advocate of what he calls a multidisciplinary approach: “You do need people crunching numbers, but you also need people going to factories and doing surveys and you need people to watch political change and see what’s going on.”

Dr Chang was born in Seoul, South Korea, in 1963 and came to the UK in 1986 as a graduate student at the Faculty of Economics and Politics of the University of Cambridge. Here, he obtained his PhD and has been teaching economics since 1990.

Dr Chang has worked with a vast collection of acronyms: UN bodies, multilateral organisations, private sector firms, NGOs, and think-tanks. He has written bestselling books on economics, including 23 Things They Don’t Tell You About Capitalism (2010) and Bad Samaritans: The Guilty Secrets of Rich Nations and the Threat to Global Prosperity (2007).

His books are informative, entertaining, and controversial. His 23 Things, which claims that free markets don’t really exist and that the washing machine changed society more than the Internet, has sold close to 700,000 copies and has been translated into 32 languages.

Another of his books, Kicking Away the Ladder: Development Strategy in Historical Perspective (2002), examines how rich countries really become prosperous. In the tome, Dr Chang looks at how rich countries put pressure on less fortunate nations to adopt certain “good policies” and build “good institutions” that are deemed requisites for successful development. He concludes that the economic evolution of rich countries differed dramatically from the snake oil prescriptions they now peddle to poorer nations.

From this, Dr Chang infers that developed countries are “kicking away the ladder” that they climbed earlier to reach the top, thus preventing developing counties from adopting the very policies and institutions with which they forged a path to prosperity.

One of the tenets of economic theory is that human behaviour and decisions are based on rational choice. Rationality is the foundation upon which most microeconomic models are erected. However, Dr Chang takes a broader view. He points out that while rational thinking is an important aspect of human nature, people are also driven by imagination, ambition, and irrational fears. They are swayed by the arguments – not always rational – of others. Advertising offers a good example. Thus, leaving economic outcomes to the market may produce irrational outcomes.

Dr Chang is wary of mathematical and pseudo-scientific models in economics. He argues that such models are hard to grasp for people with limited mathematical and statistical skills and compares today’s impenetrable economic literature with the Bible which the church long refused to translate from Latin, fearing that offering common people access to its contents could cause misinterpretation. Dr Chang suspect that most of today’s economists are not unlike medieval clerics in their misguided reluctance to grand commoners a glimpse at the inner workings of their craft. As a result, economic decision-making remains the domain of a high priesthood of technocrats.

“Contrary to what professional economists will typically tell you, economics is not a science. All economic theories have underlying political and ethical assumptions, which makes it impossible to prove them right or wrong in the way we can with theories in physics or chemistry. This is why there are a dozen or so schools in economics, with their respective strengths and weaknesses. Free market economics alone already comes in three flavours: classical, neoclassical, and Austrian.”

Dr Chang wants to democratise economics: “It is entirely possible for people who are not technocrats to have sound judgments on economic issues, based on some knowledge of key theories and an appreciation for the underlying political and ethical assumptions. Very often, the judgments of ordinary citizens are better suited to real life scenarios than those proffered by professional economists who tend to have a rather narrow worldview.”