Can the double-edged sword of this tiny country be finally sheathed by a merger into the European Union?

IT isn’t entirely certain that Milo Djukanovic, Montenegro’s long-serving Prime Minister, ever had a photo of Margaret Thatcher on his office wall – but the fact that people say he did explains something about Montenegrin politics.

The one-time Communist activist in the former Yugoslavia has travelled far. These days, when he’s not putting down street protests with tear gas, he’s trying to persuade the world that Montenegro is the new playground of the rich – the “Monte Carlo of the Balkans”. Russian money – some of it of dubious origin – has been pouring in, bankrolling the construction of swanky new hotels along the country’s diminutive Adriatic coastline.

In June this year the country will mark its tenth anniversary as an independent state. When it finally severed links with its big brother, Serbia, Montenegro became one of the smallest countries in Europe. It has applied to join the European Union, an overture which has not exactly been rebuffed, but is being treated with caution.

Europe would like Montenegro to be more robust in its approach to chronic corruption, organised crime and addiction to smuggling before it is granted membership. Montenegro has been the centre of cigarette smuggling on an industrial scale for decades, and the EU has set a list of conditions which must be met before membership is progressed. These include the tackling of ecological, judicial and crime-related difficulties. There is also the tricky question of Montenegro’s unilateral adoption of the Euro as the state’s official currency in 2002, which has not gone down well in some Eurozone circles. NATO, on the other hand, is ready to welcome the little state with open arms.

Ethnically and historically Serbian, Montenegro has always had an inclination to independence. Its mountains and dense forests, which bred a certain individuality, have made it relatively easy to defend, and Montenegrins have been defending it stoutly since its inception in the Middle Ages. For many centuries it was involved in almost constant warfare against the Ottoman Turks.

Montenegrins are proud of their pugnacious reputation. Mediaeval soldiers who showed fear in battle would be made to dress in women’s clothing before being driven from their homeland by real women with sticks and brooms. Mount Lovchen, or the “dark mountain”, in the north of the modern country of Montenegro is not only the origin of its name, it also serves as a source of inspiration and nationalist comfort. With echoes of England’s legend of King Arthur, the “once and future king”, Montenegro has Ivo the Black, a renowned warrior prince of the 14th century. It is said that Ivo will wake from his slumbers and ride to the rescue when danger threatens. There have been many occasions over the years when one might have expected Ivo to stir – but he’s slept on.

The world’s knowledge of Montenegro is slim – based on a mixture of tourist advertisements for cruises along the Bay of Kotor, and a Graham Greene-style picture of swarthy mountain men in sheepskin jerkins, complete with bandoliers slung over their shoulders.

The picture is not inaccurate – brigands and beautiful scenery have summed up this tiny corner of south-eastern Europe for a long time. Montenegrin tourist authorities excel at promotion, extending invitations to journalists from the West to sample their country’s delights – for free. They are rewarded with lines like this (from a British national newspaper last year): “Though the Yugoslavian kings and queens have gone, (hotel) guests here are still treated like royalty.” Treacly and superficial perhaps, but if it helps bring back the tourists who were scared away by the Balkan wars of the 1990s, then Montenegro won’t complain. The tourism industry, which includes uncrowded coastal and ski resorts, is vital to the country’s survival.

Under the glossy surface, however, lurks uncertainty. The Balkans are historically unstable, and though the fighting of the 1990s has ceased, many observers believe it will take a generation to achieve lasting peace in the region. 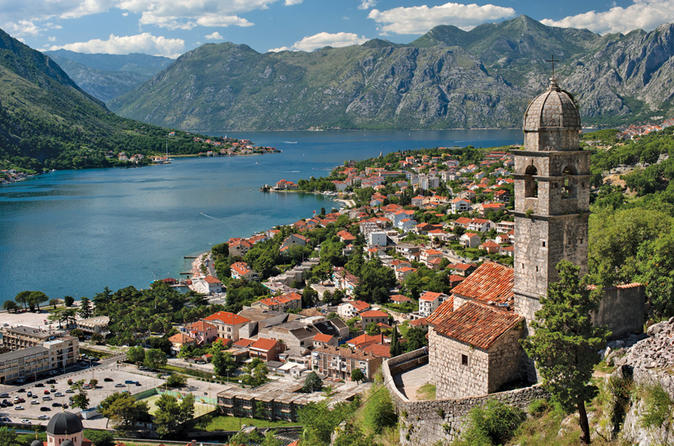 General Tito, who earned his reputation as a partisan fighting the Axis powers in World War Two, skillfully knitted a nation out of the post-war ruins of Serbia, Croatia, Slovenia, Bosnia, Macedonia and Montenegro. He managed to hold it all together under the Yugoslavian flag – a rare example of a communist state which prospered while holding the Kremlin at arm’s length. Like many dictators, Tito didn’t pay the same attention to life after his death. Yugoslavia fell apart, and the ethnic divisions which had been suppressed under Tito’s proletarian brotherhood, erupted into a series of wars which shocked the world by their brutality.

Milo Djukanovic, who has held the post of prime minister of Montenegro, on and off, for 25 years, said sorry to the people of Croatia in 2000 for the part played by Montenegrins during the wars. The bombing of civilians in the ancient walled city of Dubrovnik, just up the Adriatic coast, in 1991, caused international outrage. “I want to apologise to all citizens of Croatia…for all the pain and material damage inflicted by any member of the Montenegrin people,” he offered.

Montenegrins formed a tough and loyal part of Slobodan Milosevic’s Serbian army, which carried out the attacks. Living up to their macho image, they were referred to as “Montenegrin thugs” by Croatians and Bosnian Muslims during the conflict. Montenegro was also implicated in the infamous massacre of nearly 100 Muslim refugees from the fighting in Bosnia.

Djukanovic’s apology may have had more to do with his country’s attempts to court the EU, as was his attempt to distance himself from former ally Milosevic which led, eventually, to the Montenegrin declaration of independence in 2006. European pressure is also likely to be the cause of several extraditions of those accused of war crimes; the latest, in March this year, saw a former Serbian general sent to face trial in Croatia.

Like many of his countrymen, Djukanovic is very tall – a strapping six foot six. In 2010 the New York Times was forced to publish a correction after reporting that the prime minister was only six foot three. The former basketball player likes to present a sturdy image to the world.

Speaking to a crowd of champagne-sipping VIPs at the start of the development of Porto Montenegro, a project to convert a former naval base at Tivat into a Monaco-style marina, Djukanovic said: “This is not a place for mediocre investment projects. Montenegro will become one of the most elite tourist destinations in the world.”

Meanwhile, fellow Montenegrin, Vanja Calovic, who leads an internationally-supported anti-corruption organisation in the country, said: “Montenegro is for sale. (It) is selling everything it has, and I am just not sure what the country is getting out of all this.” And while the coastal strip of Montenegro looks affluent enough, the scene in the hinterland is one of chronic poverty.

Calovic, who has endured several smears from sections of Montenegro’s state-backed press, is not alone in worrying about the country’s economic future. Half of Montenegro’s export revenue comes from KAP, an aluminium factory sold to a Russian billionaire earlier this century – a move which threatens the country’s fragile economy, it is feared. Djukanovic believes Montenegro must be competitive in its appeals to foreign investors, but by reducing VAT items relating to the coastal development of Porto Montenegro from 17% to 7% it earned a reprimand from the European Commission for being anti-competitive.

And despite all his efforts, Djukanovic can’t pull himself or his country from the mire of corruption allegations. Anti-government demonstrations broke out last year on the streets of the capital, Podgorica. The protesters, organised under the banner of “the Democratic Front”, were demanding free elections, greater civil rights and an end to corruption. One protester, speaking of Djukanovic, told the international media: “(He) has been in power for more than 25 years…too much even if he was Mahatma Gandhi and not a thief.”  The protests were swiftly broken up by police using tear gas.

In 1918, as a member of the Allied forces, Montenegro earned a seat at Versailles as the victors tried to make sense of the aftermath of World War One. The exiled King Nicholas, who opposed popular calls in his homeland for unification with Serbia, kicked up a fuss. He was largely ignored by the great powers, but Montenegro’s seat at the treaty table went unoccupied – and with it, Montenegro’s opportunity for independence.

In 2010 the King’s descendant, Crown Prince Nicholas II (a 66 year old Paris-based architect) was invited to take up residence in Montenegro. His family had fled the country after the monarchy was abolished following World War One. The country remains a republic, but the rehabilitation of the dynasty was supposed to be a symbol of a new tolerance. And though he will earn £250,000 a year from the state, the prince won’t get his family’s palaces or treasures back.

Montenegro has a population of 620,000 citizens – slightly larger than the number of people living in Cornwall. It occupies a landmass of around 5,000 square miles, 18 times smaller than the UK. The poet Byron once described its mountains and Adriatic shoreline as “the most beautiful merging of land and sea.”

The process of merging this tiny new state into the European Union is not quite so pretty, but the difficult negotiations may be the making of Montenegro. As the old saying goes: “You can’t eat scenery.”