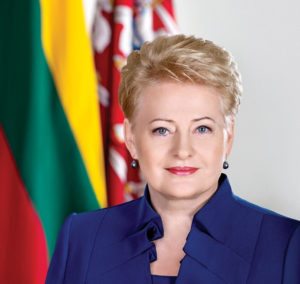 Women political leaders who make it to the top are few and far between. Those that stay in power are even more of a rarity. Indira Ghandi, Margaret Thatcher, and Angela Merkel all stayed in office for at least a decade and the indomitable German Chancellor is still going strong. Lithuania’s President Dalia Grybauskaitė is bidding to join this elite band of long-serving women politicians.

Lithuania elected its first lady president in May 2009. Re-elected five years later, Ms Grybauskaitė has emerged as a powerful and determined head of state leading her country through a time of both political and economic crisis as Europe engages in its biggest standoff with Moscow since the Cold War. During her early years in office, Ms Grybauskaitė’s government focused on the economy. A regime of public expenditure cuts alongside encouragement for private enterprise was duly implemented.

Lithuania and the Baltic states Estonia and Latvia all gained independence during the collapse of the Soviet Union in 1990 and subsequently joined NATO and the EU. They have an uneasy relationship with Moscow, and the political instability in Ukraine has caused reverberations in the Baltic states.

Since the annexation of Crimea, and unlike other European leaders, the pugnacious Ms Grybauskaitė has been blunt and outspoken in her criticism of Russia. She says that Russian troops are present in eastern Ukraine and that a Russian missile was responsible for downing the Malaysia Airlines flight MH17 over Ukraine in July 2014. She has compared President Putin to both Josef Stalin and Adolf Hitler. She also labelled Russia a terrorist state, and warned that Moscow’s aggression could spread throughout Europe and beyond.

The Russian Foreign Ministry answered the “terrorist state” accusation by suggesting that Ms Grybauskaitė “pull in her Komsomol horns.” The Komsomol was the Soviet Communist Youth League active when Ms Grybauskaitė was growing up and Lithuania was part of the Soviet Union. The young comrade studied at Zdanov University in Leningrad (now St Petersburg) and earned a doctorate in economics from the Moscow Academy of Public Sciences. Ms Grybauskaitė returned to Vilnius in 1983 to lecture at the Communist Party’s training college.

After Lithuania gained independence, Ms Grybauskaitė’s career took off: she abandoned her communist past and embraced Lithuania’s European connections. She held posts at the country’s Ministry of International Economic Relations and the Ministry of Foreign Affairs. She was posted to the Lithuanian embassy in the United States. Back in Vilnius, Ms Grybauskaitė became deputy finance minister and was Lithuania’s chief negotiator with the IMF, the World Bank, and the delegation negotiating Lithuania’s accession to the EU. She was a strong supporter of economic reform, backing privatisation and deregulation.

The combination of free market views, a reputation for toughness, and blunt talk resulted in Ms Grybauskaitė being awarded the nickname Lithuania’s Iron Lady, in homage to Margaret Thatcher. In 2004, Lithuania joined the EU and Ms Grybauskaitė was appointed European commissioner responsible for financial programming and budget. The next year, she was named 2005 EU Commissioner of the Year.

In 2009, Ms Grybauskaitė quit Brussels and returned home to stand as an independent candidate in Lithuania’s presidential election. She gained nearly 70 per cent of the vote, giving her the largest-ever margin of victory for a Lithuanian presidential candidate.

Strong leaders attract strong criticism. Critics of Ms Grybauskaitė allege that her adversarial speeches about Russia made Lithuania a target for conventional and unconventional attacks and that the country is on the receiving end of cyberattacks from its eastern neighbour. Others say that her rhetoric has stirred up anti-Russian feelings leading to a split society and discrimination against Lithuania’s Russian and Polish minorities.

Little is known about Ms Grybauskaitė’s life away from the limelight apart from the fact that she is a karate black belt and speaks several languages including Russian, Polish, English, and some French. However, her guardedness about private affairs creates plenty of opportunity for speculation: the unauthorised biography Red Dalia portrays the solitary Ms Grybauskaitė as an unscrupulous careerist lacking principles, friends, and family.

Ms Grybauskaitė is clearly a tough and determined lady who is not easily intimidated. She has a clear vision of Lithuania’s place in Europe and, having grown up in the communist system, believes that the way to deal with the Russian bear is to talk its language.