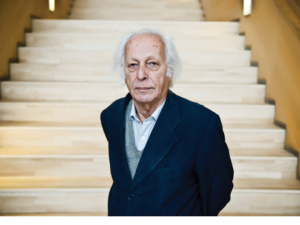 A self-described creative Marxist, Samir Amin (84) is a French-Egyptian economist who lives in Senegal and firmly believes that world capitalism – defined as the rule of oligopolies based in rich countries – maintains its power through five monopolies: technology, natural resources, finance, global media, and red buttons. Capitalists, Mr Amin argues, control the means of mass destruction. He concludes that real progress can only be accomplished once these monopolies have been overturned.

With ideas formed in the 1950s and 1960s, a time when African liberation movements triumphed, Mr Amin’s personal development saw him move from communist activism in Nasser’s Egypt to dispensing advice to socialist leaders such as Tanzania’s Julius Nyerere, before becoming a leading voice in the World Social Forum.

While Dependency Theory is out of vogue in development studies, Mr Amin remains its staunch advocate. Mainstream economics considers national economies as distinct units. Conversely, Dependency Theory views the world as a single integrated economy. As such, it is the globalism of the left. In this analysis, the system of exploitation of labour and that of states are one and the same. From this, it follows that the system of states merely reflect the global expansion of capital: rich and poor nations are inseparable twins and cannot be juxtaposed. Unsurprisingly, Mr Amin views globalisation as an extension of capitalist imperialism.

He vehemently denounces the inhumanity of contemporary capitalism. He is also highly critical of political Islamism and Eurocentric Marxism which he says both marginalise the truly dispossessed. In Mr Amin’s worldview the globe is divided into a centre surrounded by a periphery. The role of the latter is to supply the former – comprised of North America, Western Europe, and Japan – with the resources needed for development. This means that the periphery is perpetually unable to develop itself as the exploitation of raw materials occurs on terms of trade favourable to the centre.

In this view, underdevelopment is not a lack of development: it is the double-edged sword wielded by rich countries that depend on the active exploitation of other nations which are thus rendered underdeveloped.

The theory of development for which Mr Amin is perhaps best known is “de-linking.” This scenario has peripheral countries withdrawing from the global economy. Mr Amin argues that poor countries should develop their economies via state intervention, imposing strict controls on cross-border flows of capital and mandating trade with like nations as opposed to sending raw materials to already prosperous countries at the centre.

Mr Amin argues that countries on the periphery must nationalise their financial sectors, strongly regulate their natural resources, and de-link internal prices from those set by the global market. This allows the periphery to break the chains that bind them to multilateral institutions such as the World Trade Organisation, the World Bank, and the International Monetary Fund. Mr Amin also says that regardless of the problems that nationalised industries present; it is the only possible foundation upon which an economy that produces social inclusion may be built.

Mr Amin was born in Cairo into a family of doctors. His Egyptian father and French mother sent their son to Paris where he obtained a diploma in Political Science and one in Statistics and Economics. He soon joined the French Communist Party, but finding it too tame, switches to Maoism.

In 1957, Mr Amin returned to Cairo where he worked as a researcher for the Institution for Economic Management – a state-run entity. He became an adviser to the Ministry of Planning of Mali before being offered a fellowship at the Institut Africain de Développement Économique et de Planification (IDEP) in 1963. In 1980, he left this job and became a director of the Third World Forum in Dakar.

Mr Amin is a prolific writer and has authored more than thirty books with rousing titles such as Imperialism & Unequal Development, Spectres of Capitalism: A Critique of Current Intellectual Fashions, Obsolescent Capitalism: Contemporary Politics and Global Disorder, and The Liberal Virus. His memoirs were published in October 2006.

In his most recent tome The Implosion of Capitalism (2013), Mr Amin attempts to connect major events that may signal the end of the world as we know it: the financial crisis, the travails of the euro, the emerging BRICS nations, and the rise of political Islam are all seen as heralding the beginning of the end for capitalism.

Mr Amin holds the global dominance of large corporations responsible for the sorry state of affairs in the world. He sees globalisation as but the most recent of imperialism’s incarnations. But there is hope: Mr Amin holds up China as a shining model of a political economy that has evolved and integrated an alternative economic strategy. Modern-day China possesses many features Mr Amin considers essential for underdeveloped countries to emulate. Not the least bothered by empirical evidence, Mr Amin has repeatedly stated that China’s model of economic and political development still adheres to the teachings of the venerable Mao Zedong.

Even at 84, Mr Amin has lost none of his revolutionary fervour. From his home in Dakar, he continues to write provocative tracts that seek to expose capitalism and the ways in which it perpetuates the periphery’s plight.