A bespectacled Italian gentleman, with a girth suggesting a rich and sedentary lifestyle, Umberto Eco was – until 23rd of February this year – a figure conforming comfortably to our idea of the quintessential European public intellectual. Professor emeritus at the University of Bologna, a polyglot based in Milan who kept a pied-a-terre in Paris, a crowd-pulling but rarely understood lecturer, bestselling author, social commentator, and onetime guest curator at the Louvre, Mr Eco’s name adorns the spines of millions of well-skimmed paperweights.

Three days after his death, hundreds of mourners filled the grounds of the Sforza Castle in Milan. They held their smartphones above their heads in reverence to the author as his coffin was carried into the Rocchetta courtyard, where he was placed between two wreaths bearing the Italian tricolore. Musicians played Arcangelo Corelli’s baroque sonata La Follia, a favourite of Eco’s that he used to play on the clarinet.

Umberto Eco was born in the Piedmontese city of Alessandria. His grandfather had been a foundling of the city and was given the surname Eco, an acronym for ex caelis oblastus (brought from the heavens).

Mr Eco studied Medieval Literature and Philosophy at the University of Turin, earning his Laurea degree in 1954. Two years later, he adapted his thesis on Thomas Aquinas into the book The Aesthetics of Thomas Aquinas (Il problema estetico in San Tommaso). It marked Mr Eco’s literary debut. He would return to the university in 1961 as a lecturer in Aesthetics.

By the time he published his first novel, Umberto Eco was already an academic of high repute and professor of Semiotics at the University of Bologna, a position created especially for him. He had several nonfiction books to his name, most notably The Open Work (1962), Opera Aperta (laying out his ideas of multiplicity as authorial intent and role of the reader in a work) and A Theory of Semiotics (1974, published originally in English), providing a foundation for an interpretive approach to semiotics – a field Mr Eco defined as, “a general theory of all existing languages, all forms of communication.” He was a regular columnist for several newspapers in Italy including Corriere della Sera and La Repubblica and served as cultural editor of the Italian television corporation RAI.

In 1980, Mr Eco published his first novel, The Name of the Rose (Il nome della rose), a historical murder mystery that tells the story of a Franciscan friar investigating a number of connected deaths in an Italian monastery against the backdrop of the turmoil that marked the Avignon Papacy. In the book, Mr Eco relies on his expertise in semiotics as a medievalist and explores his ideas on literary theory and intertextuality.

The Name of the Rose remained his greatest success, selling millions of copies. It has been translated into more than forty languages. In 1986, the book was made into a film.

Umberto Eco, who described himself as an academic six days a week and an author on the seventh, approached the writing of novels in the manner of an academic. He would undertake extensive research, compiling extensive bibliographies. The vast majority of his characters have a historical counterpart while the remainder are squeezed into history to facilitate a blatantly fictional but illuminating narrative.

The esoteric and conspiratorial became major themes of most of his novels. This is particularly true of his second book Foucault’s Pendulum (II pendolo di Foucault), the story of three bored publishers concocting for their own amusement a fanciful complot involving a hodgepodge of secret societies. However, the publishers’ fun gets out of hand and they find themselves the target of an actual secret society. 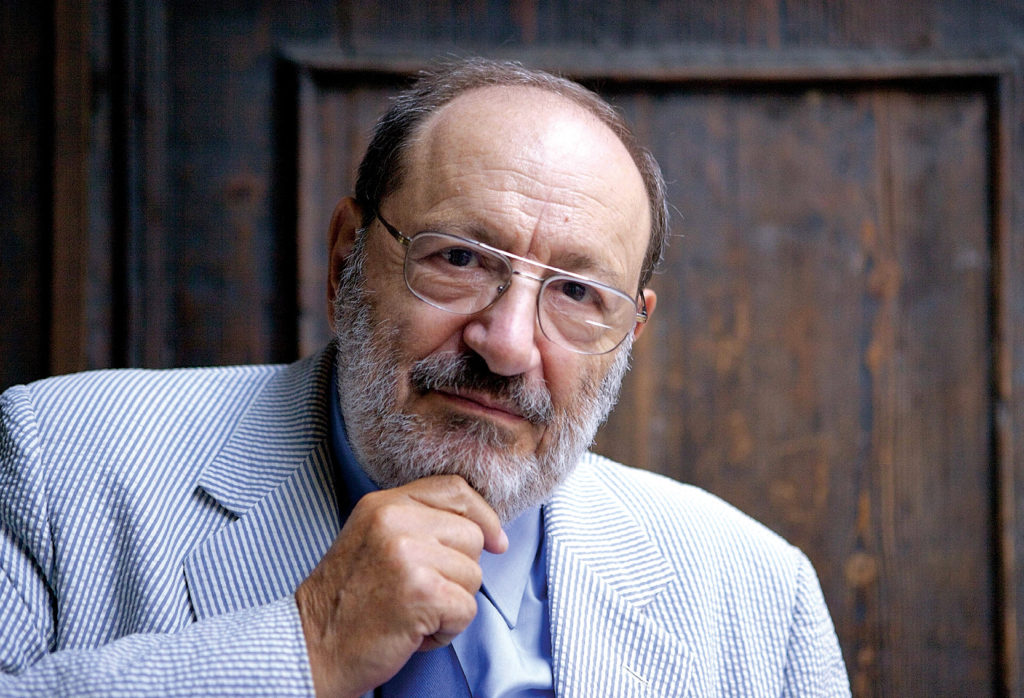 Foucault’s Pendulum is often described as the thinking man’s Da Vinci Code. This label gives the impression that Mr Eco’s novels are straightforwardly sensationalist, if better researched and with stronger prose. This would be the mistake of – to borrow the writer’s own terminology – a first level model reader.

Mr Eco’s approach to literary theory is all about an openness of interpretation. His novels are exercises in the literary deconstruction of conspiracies and the interplay of different, often mutually exclusive, narratives – be they historically based or not. The power of conspiracies is not derived from any base in reality – which, like any other story, is open to countless readings – but from the convenient narratives they deliver.

In his 2010 novel The Prague Cemetery (Il cimitero di Praga), Mr Eco’s protagonist – and the only fictional character in the book – is a 19th century Italian forger living in Paris who inherits from his grandfather a fervent and fashionable suspicion of Jews. The book stretches history to portray the forger as the author of the document that would become the Protocols of Zion as well as giving him a major role in the Dreyfus Affair – a sort of anti-Semitic Forrest Gump.

The Protagonist is simultaneously cognisant of his fabrications and careful never to deliver a lie that doesn’t confirm what his patrons already know. Being discredited is never a concern as this only proves the extent of the conspiracy. At the same time, he is wholly convinced that his inventions reveal a greater truth.

Umberto Eco’s novels are not embellished with a Dan Brown-style preface, bluntly entitled Fact. This is because Mr Eco’s works are sufficiently well-informed on history to ensure that the question of what is fact – and what is not – remains beside the point.

“Books are not meant to be believed. They must be subjected to inquiry. When we consider a book, we mustn’t ask ourselves what it says, but what it means,” Mr Eco once said. Whether escaping to a world created by Ian Fleming or James Joyce – Mr Eco was considered an authority on both – ascertaining an academic’s musings or investigating a murder, we are interrogating a text. This, Mr Eco posits, is itself an act of creation.

After finding literary success, Mr Eco’s focus remained on his academic works and he continued to publish nonfiction on both semiotics and literary theory. But his fame as an author did naturally lend these books, such as Kant and the Platypus (1997, Kant e l’Ornitorino) and Six Walks in a Fictional Wood (1994), a far greater profile than they would had garnered otherwise. Last year saw the publication of his novel Number Zero (Numero zero).

Following his death in February, the release of his latest – and as it turned out – posthumous work Pape Satan Alleppe (taken from a line in Dante’s Inferno) was brought forward from its original date in homage and, sincere as the sentiment undoubtedly was, the public attention certainly didn’t hurt. Satan Pape Allepe: Cronache di una società liquida is available at fine Italian bookstores.

An avid supporter of the European project, Umberto Eco, though decidedly not an economist, acknowledges that free markets, for all their faults, were likely the decisive force behind sustained peace and cooperation. However, he opined that integration would only take place once all inhabitants of the continent had become Europeans culturally. Not the monolithic culture of other super-states, rather a culture defined by its interconnected diversity: a super-culture for a super-state. The Italians have a breezier notion of what constitutes a nation – the inhabitants of each city having very strong notions of what it means to be Milanese, Florentine, or Roman – but they are all Italians.

The Sforza Castle, the venue of Umberto Eco’s funeral, is now a symbol of the Italian Renaissance and only on a second consideration do we remember that it is in fact an imposing fortification. The castle is a remnant of a time of warring cities – wars that Italians now, less than a century and a half after their country’s unification, recognise as acts of fratricide.

Is it such a leap of faith to extend that to all of Europe and see the seventy years of cooperation amongst its nations as a cessation of our history of fratricide? Many have tried to unite the continent through war – and all failed. In the modern paradigm, the instruments of unity are monetary and free trade whilst the most immediate symbols are rather sterile banknote designs. Still, this is probably preferable to the romantic nationalism of the 19th century but does mean that when we tell the story of Europe, the main protagonists are bankers like Mario Draghi rather than renaissance greats such as Umberto Eco.

Umberto Eco (1932-2016) is survived by his wife Renate Eco and their children Stefano and Carlotta.