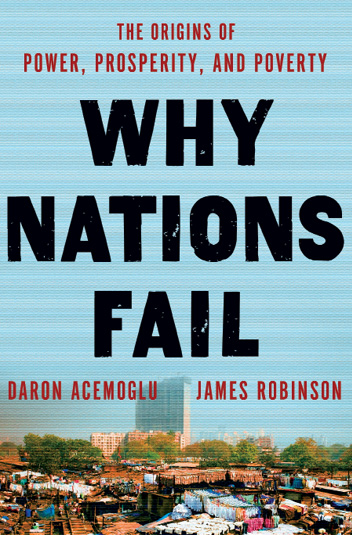 There aren’t many contemporary works on global economics that pinpoint the Black Death as a major factor in the development of the modern world.

Economist Daron Acemoğlu and political scientist James A Robinson delved deep into the recesses of history in search of evidence to support the hypothesis – exhaustively detailed in Why Nations Fail: The Origins of Power, Prosperity, and Poverty1 – that nations succeed or fail depending on the performance of their economic and political institutions.

According to the two American academics, governments may be broadly classified as either inclusive or extractive. The former type lifts the burden of state control, allowing freedom and protection in equal measure, to encourage citizens to create wealth. The latter type of government exerts excessive control in order to maintain a powerful ruling elite. Modern China, Messrs Acemoğlu and Robinson argue, falls squarely in the extractive category.

To establish this notion, the authors present a large body of historical evidence, from the fall of the Roman Empire to the rise of its British successor – hence the reference to The Black Death, which not only decimated the population of Mediaeval Europe but wrecked the feudal system simultaneously which, in turn, lead to greater rights and rewards for those who managed to survive.

Why Nations Fail is the culmination of fifteen years of collaborative research into the proposition that, while economic institutions are critical for determining whether a country is poor or prosperous, it is politics and political institutions that ultimately decide a country’s economic fate.

Not All Growth Equal

Messrs Acemoğlu and Robinson suggest that while absolutist regimes with extractive economic institutions can sometimes achieve economic growth, they also stifle innovation and deploy only pre-existing technologies. Such growth is difficult to sustain and the regime is prone to collapse. The Soviet Union is an example of an extractive economy which saw rapid growth in the 1950s and 60s, but failed to encourage individualism and invention. As a result, it subsequently went into terminal decline. The authors suggest that China is heading in the same direction.

When looking for answers to the question “Why are some nations poor?” conventional wisdom points to a variety of possible causes: geography, climate, agricultural conditions, and lack of a traditional work ethic. Why Nations Fail makes the point, however, that the common factor in failed states is the fraudulent nature of their governing institutions.

When thousands of protesters took to the streets of Egyptian cities during the Arab Spring uprising of 2011-12, one word summed up the anger of the crowds – corruption. The authors illustrate the point with a comparison of British and Egyptian history; they highlight the effects of the Glorious Revolution of 1688 which transformed the political and economic rights of the individual in England (not quite a united kingdom at that point) which, in turn, shaped the stage on which Britain’s Industrial Revolution was to unfold shortly after.

No Interest in Development

Though these industrial advancements were adopted by other nations, most notably the fledgling USA, the new technologies didn’t spread to Egypt because, at the time, it was under the control of the Ottoman Empire. The Ottomans had little interest in achieving prosperity for the peoples they ruled. As Egypt fell under the control of the British Empire, that institution also displayed little interest in extending political and economic rights to the country’s masses. When Egypt finally overthrew its colonial masters and deposed its monarch in the 1950s, it replaced them with a form of government which was just as elitist. Egypt remained poor.

That story is repeated across Africa and South America, where, in many cases, colonial governments were replaced by other extraction regimes. Ruling elites gathered wealth, over-exploited natural resources, and kept their people impoverished. While potentates were occasionally overthrown, they tended to be replaced with similarly egotistical rulers.

The authors illustrate that political change is the only way to bring sustainable wealth to a poor country. They highlight the stark contrast between the twin towns of Nogales – one in Arizona and the other, just over the border, in the Mexican state of Sonora.

In 1853, following the Gadsden Purchase by which the US acquired 76,800km2 from Mexico for $10m (equivalent to about $274m today), the border redrawn across the Nogales Valley. Two large settlements grew up on either side. The inhabitants share the same ancestors, culture, food, and music. What they don’t share is equal prosperity.

On the Arizonan side, the average annual household income is about $30,000, most teenagers are in school, and the great majority of adults have a high school degree. The population is relatively healthy and life expectancy is well above the global average. Crime rates are low, and people can go about their daily business in relative safety. “Democracy is second nature to them,” say the authors.

South of the Border

South of the border in Mexican Nogales, the picture is less rosy. The average household income is about one third that of their northern neighbours. Most teenagers do not attend school, infant mortality is high, as is the crime rate. Opening a business is risky. Businesses have to “grease palms” to get off the ground. “Residents of Nogales, Sonora, live with politicians’ corruption and ineptitude every day,” the authors add.

Messrs Acemoğlu and Robinson point out that the geography is the same, as are the agricultural conditions and the risk of disease. The only variances stem from two different forms of government – one inclusive and the other extractive.

Some critics of the theory put forward in Why Nations Fail say the authors, though possessing vast academic experience, have dumbed down to appeal to a wider readership. They say the book’s hypothesis is too simplistic, and that the authors ignored the many other causes which shape a nation’s fate.

American social scientist and author Jared Diamond2, who reviewed Why Nations Fail in the prestigious New York Review of Books3 when it was first published in 2012, took exception to what he saw as Acemoğlu and Robinson’s dismissal of his own theories on poverty, mostly relating to geography and climate, and engaged in a scholarly spat with the pair. Mr Diamond suggests that Why Nations Fail presents an argument “too neat” and thinks that the book’s authors defined their hypothesis first and then looked for examples to fit that stance.

Others have questioned the idea that high taxation is no barrier to growth in an inclusive economy. Messrs Acemoğlu and Robinson maintain that there is a world of difference in, say, a 50% tax rate imposed by an inclusive democratically elected government, and paying a similar percentage of earnings to a gangster regime intent on lining the pockets of its members.

Bill Gates, for example, is one who supports the argument that low tax rates don’t necessarily bring prosperity. In the 1960s, when the top income tax bracket in the US reached 90%, GDP growth averaged 4.4%, whereas in the 2000s, with top rate reduced to 38%, the economy expanded at just 1.7% annually.

Modern economists too often fail to ask how markets develop. There is an apparent belief that if enough investment is ploughed into a developing nation, growth will automatically follow. The theory presented by Messrs Acemoğlu and Robinson in How Nations Fail shows that the causes of poverty are as old as civilisation itself. i