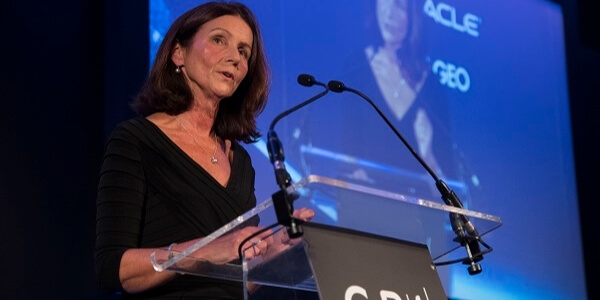 Attending her second CBI Scotland Annual Dinner at the Hilton Hotel in Glasgow, Carolyn challenged the Scottish Government to take action on a range of issues to make Scotland an attractive place to do business, including:

Productivity – establish a business-led taskforce to help grow the economy

Speaking before an audience of hundreds of Scotland’s senior business leaders, the CBI Director-General also praised the achievements of Scottish firms and urge politicians to “finally retire the rhetoric of ‘small business good, big business bad’”.

“In a world of upheaval, shocks and change, where investors and businesses are footloose, why come to any particular part of the world to build a business and create jobs?

“In the answer to this question lies many of the answers to questions of fairness, opportunity, prosperity, inclusive growth.

“And I think there are some very compelling answers.

“But there’s more that can be done. What it will take is brilliant partnership between government and business.

“And here there is plenty to build on.”

On the need for the Scottish Government to support businesses, Carolyn said:

“A key ingredient to ‘Why Scotland’ is the Scottish business environment and how it supports thriving firms.

“But there is more that can be done to increase the benefits of business success and ensure it is felt more widely by more people.

“This is where the partnership between government and business comes in.

“At the CBI – our ‘Pursuing Prosperity’ report set out our vision for adding up to £25 billion to the Scottish economy over the next decade.

“While the potential size of that prize is significant, we know it’s not something that can be achieved overnight.

“It will take a consistent, co-ordinated and collaborative effort.

“On Tuesday, the First Minister presented her Programme for Government.

“On education – the Scottish Government announced greater freedoms for schools – something we called for in our report. That’s great.

“But we need the system to deliver the skills businesses need to succeed.

“That means getting the implementation of the apprenticeship levy right – both in terms of flexibility and funding.

“On business rates – the Scottish Government announced it would put in place some recommendations from the Barclay Review, such as more frequent revaluations

“That’s something we’ve called for – fantastic. But it doesn’t go far enough. Business needs to see indexation switched from RPI to CPI to keep Scotland competitive. Can it happen yesterday, please?

“And while the Scottish Government announced a 70% increase in investment for business R&D, we do still want to see a target for public and private R&D spend.

“Admittedly most people don’t care about productivity. It’s not a great word.

“But they do care about what it does – raise wages and living standards. So it’s crucial that action is taken and urgently.

“These recommendations aren’t a ‘wish list’ from business but a vital form of contract between Scottish government and Scottish business.

“Where the Scottish government commits to being Scottish firms’ biggest champion.

“And where Scottish business invests, grows, employs, innovates, in all corners of the nation, helping to change people’s lives for the better.”

On the need for politicians to support both small and large firms, Carolyn said:

“Businesses need to lead on this – speaking up about the great things they’re doing every day.

“But I’d also like to ask all politicians, from all parties here tonight to do something which could really change the narrative on business.

“These are two massive contributions felt by people across Scotland.

“So – rather than focusing on size – let’s support all businesses.

“The third part of the answer to ‘Why Scotland?’ is making a success of Brexit.

“Despite the sound and light show politically, we know that what matters for firms has not changed.

“It is frictionless trade, no tariffs, mutual recognition of standards and regulations as well as reciprocal access to people and skills across the EU.

“A smooth transition – no cliff edges. And answers and clarity as soon as possible.

“In their letter triggering Article 50, the UK Government committed to take due account of the specific interests of every nation and region of the UK during negotiations.

“Scottish businesses are looking for evidence of progress – the logjam must be unblocked.

“It is essential that this relationship strengthens and, as EU negotiations continue, helps get the best deal possible for Scottish businesses.”

“Why Scotland?’ is a vital question and one that has many good answers.

“A nation of risk-takers and entrepreneurs.

“Of inventors and innovators.

“That means putting in place the right policies.

“We are part of the way on that journey.

“But now, we as firms need to look forward, work even more closely with the Scottish Government and with Westminster and take this nation into the very top league of best places in the world to invest.

“‘Why Scotland’ should become ‘Why not’ – making Scotland an obvious choice and a lasting difference to the lives of everyone in across the country.”