Retaining its old world charm and eschewing the floating brick concept, Holland America Line (HAL) offers its guests an opportunity to enjoy world class cruising without the depersonalised one-size-fits-all attitude found aboard some of the world’s more massive cruise ships. Though not immune to the trend of ever-larger ships, HAL vessels are still instantly recognisable as stately ocean liners.

The latest addition to its Statendam Class of ships, the MV Veendam uniquely manages to blend a whiff of hipness with the timeless traditions HAL is widely known and celebrated for. In service since 1996, the Veendam underwent an extensive refit in 2012 which added new lanai and spa class staterooms to tie into the wellness trend and offer passengers more convenient access to outside verandas and promenades.

In keeping up with public demand for smaller-scale entertainment venues, the Veendam was redesigned according to the Showroom at Sea concept which calls for a more intimate and close-up theatre-like experience that emphasises performers’ talents rather than the shock-and-awe Las Vegas-style stage that aims to overpower the senses.

However, great care was taken to preserve the ship’s timeless look and feel. The Veendam and her sister ship MV Maasdam enjoy a well-earned reputation amongst cruisers for their warm atmosphere. The thirteen decks are peppered with countless cosy nooks and crannies which offer a welcome respite from the hustle and bustle of the ship. Much effort went into producing a layout that avoids agglomerations of people in order that the ship’s 1,350 passengers never have to queue or feel part of a crowd. Usually, only at the two-deck high Rotterdam Dining Room and the famous Lido Restaurant may diners land in a small group at peak times. Cocktails offer solace.

As all fourteen HAL cruise liners, the Veendam is registered in The Netherlands and sails with a full complement of experienced Dutch officers. The vessel carries a signature collection of Dutch art, valued at over $2m, and is tastefully decorated with Delfts Blue objets d’art. A vast collection of paintings of former Holland America Line ships – such as the SS Noordam which in April 2012 alerted the RMS Titanic to ice early into her ill-fated maiden voyage – complete a setting that is both traditional and unmistakably Dutch.

Now owned by Carnival Corporation, the world’s largest cruise ship operator with over one hundred vessels across ten brands, Holland America Line was founded in Rotterdam, The Netherlands, in 1871 as Plate, Reuchlin & Company. After its debut on the Amsterdam stock exchange two years later, the company changed its name to Nederlandsch-Amerikaansche Stoomvaart Maatschappij – a name so unpronounceable outside its home country that a shortened English-language version was soon adopted. Thus, the Holland America Line was born, carrying over 400,000 people from Europe to a new life in the Americas.

HAL ships are estimated to have ferried 10% of all passengers travelling steerage to the New World. At the time, the company’s ships were hugely popular for their superior seagoing quality and cleanliness. Amongst emigrants, HAL soon became known as The Spotless Fleet.
Already in 1895, HAL introduced its first vacation cruise – a short roundtrip from Rotterdam to Copenhagen in Denmark. The voyage passed through the Kiel Canal, finished and opened to shipping that same year, a 98-kilometre-long cut through Schleswig-Holstein which the Germans only thirty years earlier had removed from Danish orbit in the Second Schleswig War of 1864. The canal, an engineering marvel of its time and still in heavy use, connects the German Bight in the North Sea to Kiel Bay in the Baltic Sea.

HAL offered its first long-distance cruise fifteen years later. In 1910, the 10,700 tonne SS Statendam – a small tub by today’s standards – set sail for Palestine from New York harbour. By now operating a fleet of over ten vessels – all passenger ships named with the suffix -dam, and cargo ships christened -dijk – HAL suffered badly during the Great War (1914-18). Although flying the colours of non-belligerent neutral Holland, six of its ships were torpedoed and sunk while others were confiscated by the British to serve a troop transports.

During the interbellum, HAL had a number of dual-purpose passenger/cargo ships built and – after the US imposed restriction on immigration – expanded its cruise schedule. In 1926, the Veendam II departed for HAL’s first Caribbean cruise whilst the Rijndam embarked on the company’s first around-the-world voyage.

Whilst cruising the world’s seven seas for leisure would eventually become Holland America Line’s mainstay, the company – by now widely recognised as one of the world’s safest and best-run shipping lines – was dealt a severe blow during World War II when it lost all but nine of its vessels to enemy action. The HAL ship Westernland, acquired by the company in 1939 and berthed in Falmouth, England, at the outbreak of hostilities served as seat of the exiled Dutch government after the country was overrun by the Wehrmacht in May 1940. 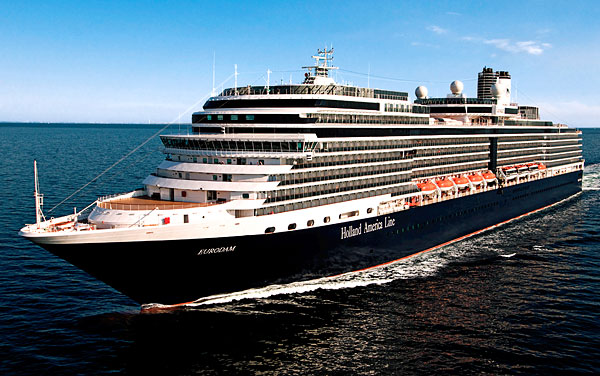 With its history intrinsically linked to that of its home country, the Holland America Line has consistently and honourably served as a sea-borne ambassador for The Netherlands.

In the post war era, just before the advent of commercial air travel, most nations sought to express their greatness, presumed or otherwise, in luxurious flag carriers – literally ships of state – such as the SS France, the Queen Elizabeth 2, and the SS United States which broke all speed records, attaining an average speed of 35.59 knots covering the distance between Ambrose lightship, at the entrance to New York harbour, and Bishop Rock, in Cornwall, in an astonishing 3 days, 10 hours and 40 minutes – shaving a full ten hours of the record established by the RMS Queen Mary fourteen years earlier.

In 1958, the Holland America Line, in line with its corporate tradition of understated elegance and superiority, joined the trend in style and with considerable aplomb, launching the 38,645 tonne SS Rotterdam – affectionately known as the Grande Dame and widely considered one of the most elegant passenger liners ever to ply the oceans.

Destined to become the sister ship to the acclaimed SS Nieuw Amsterdam (1937), work on the Rotterdam’s design was suspended “for the duration” to resume only in 1954 as The Netherlands emerged from post-war austerity. Ahead of her time and unique in design, the SS Rotterdam was conceived as a passenger liner/cruise ship. HAL management had sensed the impending demise of the big ocean liner as a primary means of transport and ordered a versatile ship that could easily be adapted for leisure cruises.

The resulting SS Rotterdam constituted a revolutionary design with a large deckhouse amidships where a funnel was usually expected to rise skywards. A number of design features such as the engine’s position two-thirds aft and its twin slightly curved uptake pipes, whilst controversial at the time, were incorporated into standard shipbuilding practice and reverberate even in today’s cruise ships.

Also a first, the SS Rotterdam was decorated with original artwork by the most celebrated Dutch artists of the time who gave the ship an intimacy and close immediacy not equalled since.

With the SS Rotterdam, the Holland America Line set the tone which the company has carefully maintained ever since: HAL ships cater to the connoisseurs of the cruising world. They keep an unsurpassed level of cleanliness – The Spotless Fleet – as became clear earlier this year when a surprise inspection by the United States Centers for Disease Control and Prevention (CDC) aboard the MV Veendam, berthed in Boston at the start of a seven-day cruise to the Bermudas, earned the vessel a perfect score of 100% compliance.

Holland America Line cruise ship are, perhaps, not for everyone: those seeking big, bad, and loud thrills may find the deep-rooted but unassuming and slightly understated luxury that characterise life aboard HAL ships slightly unsettling. This is a fleet of ultramodern high luxury cruise vessels that carry not just passengers, but also a long and proud tradition. It is a maritime heritage that will not take a bow to passing fads, whims, or momentary crazes. Instead, it rests on an eternal quest – if not, passion – for perfection. Thus, HAL cruises offer both travel to exotic and welcoming destinations, and a journey through time to an unhurried era of elegance and indulgence.