Turn the clock back a few centuries, and all a man had to do to show off his wealth was to build a massive castle and throw the odd pageant or two on its ground to entertain visiting royalty.

Sadly, no sooner had latecomers to fortification-building put the finishing touches to the drawbridge, when fashions changed and stately homes became de rigueur – the more outrageous, the better. By that time, the second Earl of Rockingham had his staff scattering coloured confetti so that guests could find their suites – the place was so shamelessly huge that people often became horribly lost wandering the eight kilometres or so of corridor at Wentworth House. However, as the twentieth century dawned, stately homes were past their prime.

Belatedly, wealth joined the Industrial Age to be expressed through machines such as lavish sports cars. Alas, cars are rather puny objects – no matter how luxuriously appointed or fast. As objects of opulence they barely make the grade. Besides, when you’ve got half the GDP of Sweden burning a hole in your back pocket even the most outrageous motor car doesn’t make much of a dent.

The post war age of jet propulsion presented new opportunities for frivolously inclined dispatching the superrich skywards. The seventies were a golden age for the private plane that allowed venerable sheiks and Hollywood’s finest to hop around the globe – jet-setting as it were. By the turn of the millennium, the rich had become vastly richer still and private airplanes became yesterday’s news.

Enter seaborne affluence. By 2000, advancements in shipbuilding technology were moving on apace. Hulls of oversized yachts were being designed in ways that would have seemed impossible just a decade before. Pretty soon, billionaires turned their heads from the runway to the slipway. Behold the mega-yacht.

Today, the fashion for owning the most lavish, gaudy, or grotesquely decked out boat shows no signs of abating. Spending anything less than £150m on a yacht would, these days, be considered almost rude – and certainly a sign of financial weakness. So when Russian billionaire and Chelsea FC owner Roman Abramovich splashed out a cool billion (dollars) on Eclipse, his floating toy, he set a new benchmark for those who thought they were rich. However, it would appear that Mr Abramovich outlay of cash, merely bought him a second fiddle.

Right now, Yacht Island Design is putting the finishing touches on a yacht so colossal, so over-designed, so unimaginably lavish, that it will simply – well – eclipse the Russian’s yacht and make all other floating castles look like bath toys.

The Streets of Monaco, as the designer’s dubbed their outlandish masterpiece, may not even be described as a superyacht or mega-yacht: the thing is so vast it warrants its own classification – the hyper-yacht.

The Streets of Monaco resembles an aircraft carrier, albeit one with a few mind-boggling extras such as charming (street) cafés, a bewildering choice of swimming pools, two speedboats, vast gardens, a full-sized submarine, a cineplex, 24 guest suites, tennis courts, and a go-kart track. All those goodies populate a 550ft long deck resembling a scaled-down version of Monaco. The vessel is expected to carry a bare-bone price tag of $1.3 billion. Whatever floats your boat. 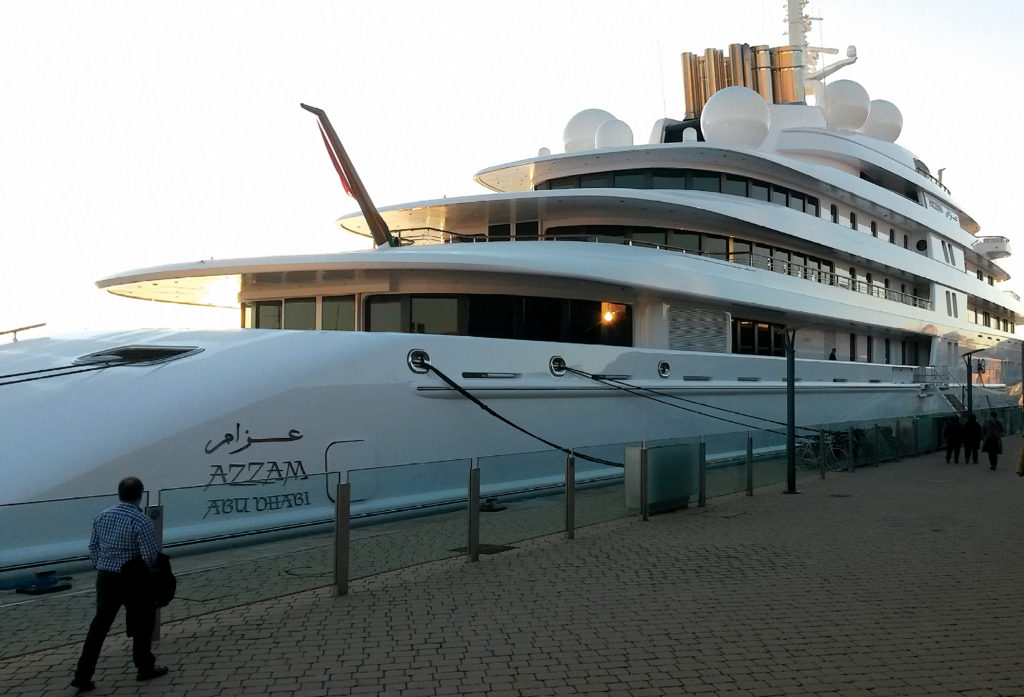 It’s one thing to spend many millions on a seagoing playground; real wealth is displayed in the eye-watering running costs. If you’ve got the disposable income to own the ultimate luxury, you’re going to need plenty more to keep the thing ticking over. Take the £260m super-yacht A owned by Russian billionaire Andrei Melchenko: arguably lacking in imagination at the naming ceremony, A requires an astonishing amount of maintenance. Below its teak deck lies a cornucopia of things that require a crew of about 42 people to keep running. It’s the sort of hazard you would expect when a fully-featured discotheque with an illuminated dance floor and sitting just below the glass bottom of the huge swimming pool above.

Typically, the extras following the initial outlay add up, on average, to around 20% of a yacht’s original value. Fuel usage would be estimated at 500 litres per hour, which works out at about £265,000 a year. Docking costs gobble up £250,000 while ongoing repairs require an annual budget in excess of £600,000. Crew wages leave little pocket change from a million pounds. At least the insurance bill comes in at a risible £160,000. Of course, if you’re anything like Roman Abramovich, you’ll want lots of extras, such as a missile defence system slated a buy at £335m.

So, assuming you’ve got a spare billion squirreled away down the back of the sofa, take some inspiration and salivate over the world’s top five super-yachts…

She’s not the priciest floating object plying the seven seas, but Azzam is certainly the biggest and fastest. At 180m LOA, and with seven decks, the mysterious Azzam is larger than Roman Abramovich’s Eclipse. Little is known of the Lürssen-built ship, but it is rumoured she was made for a member of the royal family of the United Arab Emirates. The interior was designed by Christophe Leone in Imperial French style.

Manned by a crew of 70, and owned by Russian billionaire Roman Abramovich, the Eclipse took five years to design and build. She can accommodate 24 guests, comes with two helipads, and a private submarine. As well as anti-missile security system, the Eclipse also has special reflective features that block paparazzi from being able to take any useable photos. When she left the Voss shipyard in Hamburg on December 9, 2010, she sailed straight into the record books as the world’s largest super-yacht.

The appropriately-named Dubai, currently owned by the Sheikh Mohammed bin Rashid Al Maktoum, is widely considered a blueprint for classic super-yachts. As well as the usual array of swimming pools, helipads, and speedboats, up to 115 guests may enjoy one of the most lavishly decorated interiors to be found on any yacht, anywhere – much of it accessible through the main staircase which is constructed entirely of glass.

Few yachts are shrouded in as much mystery as the Al Said, owned by Sultan Qaboos Bin Said Al Said of Oman. What is known is that amongst the swimming pools, helipads, cinemas, bars, and exquisite suites, there is a concert hall that can accommodate fifty musicians. The ship can accommodate seventy people plus a crew of 154. The interior is believed to be one of the finest at sea, although this would be difficult to prove as it is understood no photographs of the yacht’s cabins or rooms exist.

In 2012, Topaz sailed out of the same yard that created Azzam – currently the world’s largest super-yacht. Apart from three swimming pools, a gymnasium, cinema, and helicopter pad, little is known of the Topaz other than that she has impressive corporate facilities including a large boardroom and meeting complex. Said to be owned by a member of the Saudi Royal Family – purportedly billionaire Manchester City owner Sheikh Mansour – it is thought to have seven decks. The floating conference centre plays host to some of the world’s most high-stake business meetings.