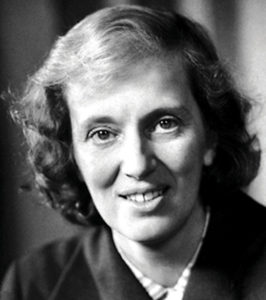 Dorothy Hodgkin (1910-1994), née Crowfoot, is one of only a handful of women to have won the Nobel Prize for Chemistry. She pioneered and developed X-ray crystallography, a new technique for determining the three-dimensional architecture of bio-molecules. Her work made it possible to map the structures of penicillin, insulin, and vitamin B12. She received her Nobel Prize in 1964, following in the footsteps of Marie Curie and Irene Joliot-Curie to become only the third woman to win this award.

Dorothy Hodgkin was a remarkable woman: very bright, left-wing, intellectually curious, and passionate about her research. She was modest and compassionate, yet clearly a force to be reckoned with. She married a fellow academic whose work meant that the couple was often separated. In an age when the place of a wife and mother was in the home, Dorothy Hodgkin managed to bring up three children while pursuing a stellar career as a pioneering research scientist. Professor Hodgkin mentored numerous research students as well, including many women. In the 1940s, Margaret Thatcher was one of her undergraduate students. The two may have shared an interest in chemistry but their political views were diametrically opposed.

Professor Hodgkin’s biographer Georgina Ferry characterises her subject as extraordinarily bright and diligent, but also exceptionally lucky. At a time when many women were denied careers by societal mores, enlightened and supportive parents, husband, in-laws, mentors, and employers enabled her to enjoy opportunities usually denied other women.

Professor Hodgkin’s social and political leanings were decidedly left of centre. She was an active advocate of peace and humanitarian causes. For twelve years, Mrs Hodgkin was president of the Pugwash Conferences on Science and World Affairs. Inspired by Albert Einstein and Bertrand Russell, Pugwash was set up in 1957 amidst concerns that the work of scientists would lead to conflict. Messrs Einstein and Russell procured scientists’ input in the hope of reducing the danger of armed conflict by seeking solutions to global security threats. In later years, Pugwash conferences were broadened to include potential dangers arising from scientific research in other areas.

In 1953, Prof Hodgkin’s political activities, and her husband’s sometime-membership of the Communist Party, led US authorities to issue a travel ban which was kept in place for nearly four decades. By the time the US government relented, Prof Hodgkin was over 80 and confined to a wheelchair by rheumatoid arthritis. Even so, she embarked on a tour of US universities where her lectures on insulin and the history of crystallography drew large crowds and filled auditoriums across the country.

Dorothy Crowfoot was born in Cairo in 1910. Both her parents were archaeologists who encouraged their children’s intellectual curiosity with a peripatetic lifestyle. Young Dorothy developed an early passion for chemistry. At the age of 18 she went to Somerville College, Oxford, to pursue her passion at an academic level. A move to Cambridge soon followed. Here, she became interested in the potential of X-ray crystallography to determine the structure of proteins.

In 1933, Dorothy Crowfoot was awarded a research fellowship by Somerville College. Three years later, the college appointed her its first fellow and tutor in chemistry. In 1937, she received her PhD from Cambridge and married fellow-academic Thomas Lionel Hodgkin who was to become an expert on African history. The couple had three children. In 1960, the Royal Society appointed Mrs Hodgkin Wolfson Research Professor. This enabled her to drop all teaching commitments. As a result, she could immerse herself in research work at her Oxford laboratory.

Prof Hodgkin received many awards and accolades. A year after she won the Nobel Prize, she became only the second woman to receive the Order of Merit (Florence Nightingale was the first). In 1991, Prof Hodgkin was one of five Women of Achievement selected for a set of British stamps issued in August 1996. She made a second appearance on UK postage stamps in 2010 when the Royal Society celebrated its 350th.