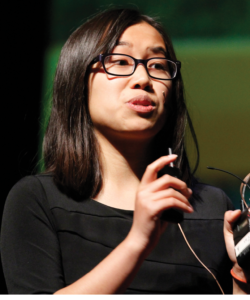 Eden Full Goh was barely ten when she picked up a book at the neighbourhood library with detailed instructions on how to build a small solar powered car. The enquiring young Canadian then experimented to find out how it would perform under different conditions. She won an award for her presentation of this research at the Calgary Youth Science Fair 2002, launching her career as a scientist and inventor.

Growing up in Calgary, the centre of Canada’s oil industry, the obvious career choice for engineers led to the oil and gas industry. However, from an early age Ms Full Goh was more interested in exploring solar power and its applications and potential. She used school science projects to find solutions to problems in solar power production and distribution. Straight away Ms Full Goh understood that the ability to track the sun is key to making solar panels more efficient. She went on to apply herself to devising a suitable low-cost tracking mechanism. In 2006, she came up with SunSaluter, a solar panel rotator that uses water and gravity to follow the sun.

After high school, Ms Full Goh headed to Princeton University to study Mechanical Engineering, Computer Science, and Robotics & Intelligent Systems. At 19, she was offered a Thiel fellowship – a pioneering award of a hundred thousand dollars which enables student entrepreneurs take to two years off from their studies to focus on their start-ups. Ms Full Goh took a step back from college to set up the SunSaluter Co.

The firm is now an established non-profit organisation dedicated to improving access to energy and water in the developing world. Its business model is to help local entrepreneurs establish their own not-for-profit businesses around SunSaluter technology. The company’s core manufacturing operations are located in India, but it is looking to expand operations into Malawi in order to better serve the African market.

The SunSaluter device is attached to solar panels mounted on a rotating frame. A weight is suspended from one side, and a jerry can of water is suspended from the other, acting as a water clock. As the container empties and becomes lighter, the panel slowly rotates. The user can control the rate of rotation by adjusting the flow of the water clock. The device also contains a water purifier that produces four litres of clean drinking water each day.

Since taking the time out to work on SunSaluter, Ms Full Goh has become much more open-minded about her education and career development. She returned to Princeton at the end of the Thiel fellowship, but is now running SunSaluter full time. “Part of the reason I went back to school was to get more technical fluency. Now I feel like I have technical skills required to undertake whatever next project I decide on.”

The young engineer is passionate about leveraging the power of engineering for social benefit. She wants to design and build products that solve society’s biggest problems. Currently, the SunSaluter is providing power and clean water in rural off-grid communities in sixteen countries.

Ms Full Goh has won a host of awards for her invention and says she is constantly trying to become a better, more intentional, version of herself. Things I’m working on lately include learning Chinese, minimising my material possessions, and improving my physical fitness. The goal I am proudest of is being selected to represent Canada on Rowing Canada Aviron’s pre-Olympic development team [as coxswain], where we won two gold medals.”

In Greek mythology Icarus flew too close to the sun. As the wax holding his wings together melted, he fell into the sea. High-flying Ms Full Goh may share Icarus’ fascination with the sun, but her technical knowledge and business acumen mean she need not fear the power she seeks to harness.