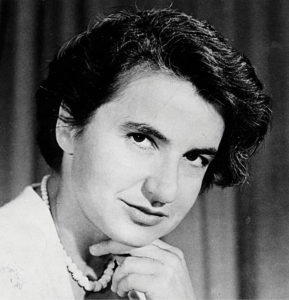 For scientists, winning a Nobel Prize represents the highest accolade for ground-breaking, original endeavours. Competition for the coveted award can be fierce and skulduggery is not unknown.

Rosalind Franklin (1920-1958) was a brilliant biochemistry researcher whose pioneering work in the 1950s led to the deciphering of the molecular structure of DNA. However, she did not receive a Nobel Prize. In the world of science, many believe that Dr Franklin merited the award: it was her work that allowed three male scientists to earn the Nobel Prize.

Dr Franklin was an energetic and adventurous woman; an intrepid traveller and avid hiker. She was a brilliant chemist as well. However, she could be combative, impatient, and short tempered. A friend described her thus: “Her manner was brusque and at times confrontational – she aroused quite a lot of hostility among the people she talked to, and she seemed quite insensitive to this.”

Born in London, Rosalind Franklin read Physics and Chemistry at Newnham Women’s College, Cambridge University where she went on to study the porosity of coal for her PhD thesis. In 1946, she switched to studying X-ray crystallography in Paris for four years before returning to London to work at King’s College. Here, Dr Franklin and physicist Maurice Wilkins led separate research groups working on different projects, each attempting to elucidate the structure of DNA – one of the basic building blocks of living matter. The two scientists did not get on well and saw themselves as competitors rather than collaborators.

At the same time, physicist Francis Crick and biologist James Watson were working on their own DNA project at the Cavendish Laboratory in Cambridge. Unbeknown to Dr Franklin, Wilkins shared some of her unpublished data and photographs with the two Cambridge researchers. One of her classic images – photo 51 showing a beautiful X-ray diffraction picture of a DNA molecule which displayed a clear helix pattern – is widely credited with helping Watson and Crick visualise the molecule and may have inspired the pair to carry on and create their ground-breaking DNA model.

Dr Franklin’s career was cut tragically short when she died of ovarian cancer in 1958, aged 37. Photographing DNA could take up to a hundred hours of exposure to radiation. Although Dr Franklin was a pioneer and expert at X-Ray crystallography, she rarely took precautions and failed to protect herself from the radiation she relied on. Her work probably led to her untimely demise.

In 1962, Francis Crick, James Watson, and Maurice Wilkins were jointly awarded the Nobel Prize for Medicine or Physiology for their discovery of the molecular structure of nucleic acids and its significance for information transfer. The three men shared the Nobel Prize for revealing the double-helix model of DNA that Rosalind Franklin had done so much to discover.

Rosalind Franklin was largely forgotten outside the scientific community until the 1968 publication of Dr Watson’s memoir The Double Helix. Watson described Franklin and her contribution in unflattering terms: she was “uninteresting, belligerent, sharp, and stubborn” and dressed with “all the imagination of English blue-stocking adolescents.” Dr Franklin’s friend Anne Sayre was much affronted and accused Dr Watson of harbouring “every known prejudice against intellectual women.”

In an attempt to set the record straight, Mrs Sayre published a biography of her friend, Rosalind Franklin and DNA. This volume presents a completely different perspective on the race to discover the structure of the complex and perplexing molecule. It tells the story of Rosalind Franklin’s pivotal role in the crucial research leading to the discovery of the double helix structure of DNA.

The controversy over whether Rosalind Franklin was robbed of a Nobel Prize by Drs Crick, Watson, and Wilkins continues to this day. In June 2015, the flames of this debate were reignited by Nobel Prize winner Dr Tim Hunt’s widely publicised maladroit attempt at humour concerning the role of women in science. The Twittersphere was at its most creative and entertaining when the resulting hashtag #distractinglysexy trended for days. Dr Hunt’s faux pas also revived the debate about who deserves credit for the discovery of the double helix.

After dwelling a couple of decades in relative obscurity, Rosalind Franklin’s name and legacy are now almost universally recognised as central to the uncovering of the structure of DNA. Regrettably, Nobel Prizes are not awarded posthumously.