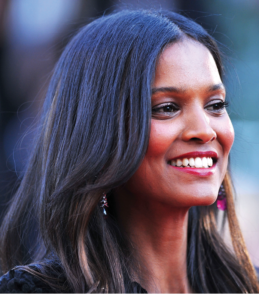 The people of rugged, landlocked Ethiopia do not lack in natural grace and beauty. Some of the best-known modern Ethiopians are phenomenal long distance runners. Another famous Ethiopian is supermodel, designer, maternal health advocate, multimillionaire, actress, social activist, and entrepreneur Liya Kebede. Tall, graceful, elegant, and thoughtful, the mother-of-two was born in Addis Ababa in 1978. While still at school, her striking good looks were noted by a French model agency. She was signed on and moved to Paris. Now living in the United States, Liya Kebede remains an ambassador for her country.

Ms Kebede’s career as a model took off around the turn of the century with a contract for the Gucci Winter 2000 fashion show. Massive exposure followed including the May 2002 issue of Vogue which was dedicated to her. By 2003, Ms Kebede attained the top of the models.com ranking. She signed a number of lucrative advertising contracts with high profile brands. In the year leading up to July 2007, Ms Kebede earned $2.5 million. Ever-vigilant when it comes to discovering and dissecting top dollar makers, Forbes Magazine named her eleventh on its list of the world’s fifteen top-earning models.

Two years after making the list, Ms Kebede starred in the film-adaption of the bestselling autobiography Desert Flower by supermodel-turned-social-activist Warms Dirie. The film recounts Dirie’s childhood in Somalia, her rise to stardom, and subsequent involvement in the campaign to stop female circumcision.

In 2005, Ms Kebede, now a United States resident, was appointed as goodwill ambassador for maternal, new-born and child health for the World Health Organisation (WHO). She also founded the Liya Kebede Foundation to help reduce child mortality in Ethiopia and around the world. The foundation funds advocacy and awareness-raising projects, and provides direct support for low-cost technologies, community-based education, and training and medical programmes. Small-scale, low-technologies can make a big difference. Providing torches to midwives as they visit pregnant women after dark is one such micro-initiative that makes life a little bit easier.

The foundation’s success brought the World Economic Forum to recognise Ms Kebede as a Young Global Leader. She served as a high-level adviser to the Center for Global Development’s 2009 report Start with a Girl: A New Agenda for Global Health. She is also part of the Champions for an HIV-Free Generation, an organisation of African leaders led by the former president of Botswana Festus Mogae.

Writing in the Huffington Post in 2015, Ms Kebede reflected: “Much has been achieved for moms over the past decade. Today the global death rate is declining fast and many highly impacted countries have made big gains in extending care and saving lives. In Ethiopia, where my foundation works with local partners, we’ve seen amazing progress as a result of health worker training programmes.”

Ethiopia is a country with a uniquely ancient culture. The then-kingdom in the horn of Africa was amongst the first independent countries to sign the United Nations’ Charter. The African Union is based in Addis Ababa. Despite a recent growth spurt, Ethiopia remains one of the world’s poorest countries, with a per capita income of barely $550.

On one trip home, Ms Kebede encountered a group of local traditional weavers whose livelihood was threatened by a decline in demand. She agreed to try and help them, and in 2008 launched Lemlem (meaning “to flourish” in Amharic), a line of cotton children’s clothes hand-spun and embroidered in Ethiopia. The label has expanded and now offers womenswear, gifts, and accessories handwoven by the craftspeople using methods that have passed through many generations.

In an interview with The Guardian in 2010 she explained the philosophy behind Lemlen: “It’s always a tricky thing, trying to make aid sustainable. It’s important that we try and help the workers become independent. By employing traditional weavers, we’re trying to break the cycle of poverty while at the same time preserving the art of weaving and creating modern, casual, and comfortable stuff that we really want to wear.”