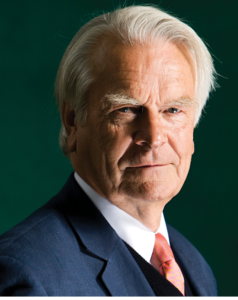 In the long list of those described as “the best leader we never had,” David Owen’s name is found near the top. Uniquely among modern British politicians, he has won admirers in equal measure from left, right, and centre.

David Owen held senior office only a few years as foreign secretary in James Callaghan’s crisis-riven Labour government of the 1970s. For most of his political career David Owen has been an outsider whose integrity, while rarely questioned, led him to quit first the Labour Party and then the Social Democrat Party, which he helped form in 1981 as one of the Gang of Four – prominent Labour leaders opposed to the radicalisation of their party.

Made a life peer by Prime Minister John Major in 1992, Baron Owen of the City of Plymouth now dwells in the House of Lords as an independent social democrat. Here, he has become a vocal critic of the Tory government on issues including Europe, foreign affairs, defence, and the NHS.

Despite his many political achievements – including attempts, with US Special Envoy Cyrus Vance, to bring peace to the Balkans in the 1990s – Lord Owen’s legacy remains untainted, possibly because he did not hold power long enough to become corrupted. As a neurologist and one-time psychiatric registrar, Lord Owen was particularly well-placed to witness and record the behaviour of those around him who did give in to the temptations offered by high office.

Lord Owen joined the Labour Party in 1959 after witnessing the ravages wrought by poverty first-hand while working at St Thomas’s hospital in Lambeth, on the opposite bank of the River Thames from the Palace of Westminster. It was here that he also met politicians battling personal issues – stress, alcohol addiction, and depression amongst them. This inspired Lord Owen to develop theories about the price of political power and its correlation to illness.

In his 2007 book, In Sickness and in Power: Illness in Heads of Government in the Last 100 Years, Lord Owen vividly describes how absolute power corrupts absolutely, based mostly on his own close-quarter observations of those in high office.

Lord Owen continued to examine this theme in The Hubris Syndrome: Bush, Blair, and the Intoxication of Power (2012). In this book he illustrates how arrogance taken to extremes can lead to incompetence.

A tell-tale sign of hubris is the inability to change direction since doing so involves admitting to a mistake, concludes Lord Owen. He might have been thinking of Harold Wilson who grimly clung to power during his second premiership (1974-1976) or Margaret Thatcher in her later Downing Street years as she grew increasingly isolated and estranged from political reality.

Lord Owen is a passionate believer in European unity. But, as his support for Brexit suggests, he is fundamentally opposed to the EU in its current form. His own belief is that Europe needs drastic reform if it is to fulfil its manifest destiny.

For a brief period in the early 1980s, it seemed Lord Owen was actually destined to break the mould of British politics. While Labour struggled with its own demons on the far left, the Tory government of the day proved highly unpopular. Lord Owen and his fledgling Social Democratic Party appeared poised to seize the centre ground. Then, in 1982, the Falklands War pulled the nation out of its stupor. Margaret Thatcher rose to the occasion, promptly regained her poise, and shattered Lord Owen’s political centre in the process. The first stirrings of what was to become New Labour signalled the end of his dream. In 1988, Lord Owen quit his party on the eve of its merger with David Steel’s Liberals.

Thus, the nation will never know if David Owen would have succumbed to the malady that afflicts those wielding power – he never did get that far.