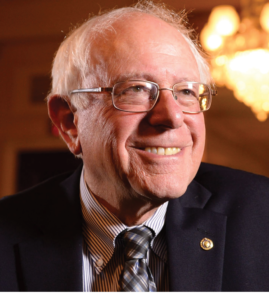 To understand Vermont senator Bernie Sanders, ask his brother. He may be found, not in downtown New York but pottering in his garden behind the terraced streets of a quiet English town. Larry Sanders is an unassuming 81-year-old, relaxing in the living room of his modest home in Abingdon. Although a county councillor for the Green Party, his knowledge of politics extends way past the impact of light pollution in the English countryside.

“Ah, Bernard,” he says with a familiar drawl barely timeworn by three decades of living in Oxfordshire. There’s a thoughtful pause as this aging gentlemen’s glassy eyes look to the distance. He fondly recalls the proud moment he saw his younger brother on the television, addressing a cheering American public with the same liberal values the brothers have shared since their early days in Brooklyn.

“When I first saw him, I was close to tears, but again and again I’m seeing the warmth of the people towards him – they seem to love him,” he beams. “And that’s a great sign of his popularity, because Bill Clinton once said that, when it comes to choosing a candidate, the Republicans fall in line, and the Democrats fall in love.”

It’s an interesting statement from the former US President, especially when you consider that his wife – Hillary Clinton – spent much of the presidential campaign sparring with the distinctly likeable 74-year-old. At some point, the name Bernie Sanders is likely to slip quietly into the history books and remain forever forgotten. But, for the present, he has a more significant impact on American politics than most of the also-rans encountered by the watching public over the decades.

For a start, Mr Sanders commands a presence on a political stage where the backdrop has been given a markedly Conservative lick of paint. The audience was also fed a largely right-of-centre rhetoric for the past year or so, but most were quick to ensure the veteran socialist prospered at the opinion polls.

As the vainglorious Donald Trump stirred up some of America’s rawest emotions with alarming takes on foreign policy, the calm steadiness of Bernie Sanders has been akin to a gentle counterbalance and a vehicle for the more moderate Americans to pin their hopes on.

Bernie Sanders and Donald Trump are not polar opposites and share a surprising number of values. Social welfare, economy, gun control, foreign policy, and immigration aside, both are after the same thing. “Many of Trump’s supporters are working class people, and they’re angry,” Larry Sanders said back in January, “and I think I can make a case for their vote.”

With his understanding that the voting public of all political persuasions are irritated about the same things – job insecurity and a stalling economy heavily favouring the wealthy – Bernie Sanders was able to appeal to those disgruntled Americans who weren’t so quick to sign up to some of Trump’s more extreme views.

Notoriously grumpy, although his older brother argues that his quiet nature can often be misread as sullen, Bernie Sanders should be hailed as one of the most refreshing new ingredients to the standard election cake served up every four years.

It was his deeply considered thinking which grew to be the most welcome attraction of this race for the White House. For, without the calm and reasoned debate that became synonymous with his lengthy deliberations, there would be little in the way of countervail for the big-spending campaigns that would otherwise have dominated proceedings.

If there’s one lasting legacy to Bernie Sanders’ relatively low-budget campaign, it will be that he got Americans thinking about social causes, rather than the paranoid angst for Muslims, Mexicans, and Moscow. There’s also this demeanour of steadfastness that appeals to voters – while Hillary Clinton repeatedly changes her policies as a knee-jerk reaction to her rival, Bernie Sanders remains unchanged in his lifetime’s focus on health, wealth, and inequality.

Staid, sullen, perhaps even grouchy, Bernie Sanders may have had to fight harder than most candidates to be taken seriously as a genuine contender, but there’s no doubt he’s been single-handedly responsible for bringing Americans back from the brink of an unwitting lurch to the right.