NESTLED on the outskirts of a former coal mining town in the English Midlands stands a gigantic rectangular building. Devoid of soul and windows, the colossal structure has been painted in broad horizontal stripes. It’s alternating shades of pale blue and grey are an attempt to make it blend in with the prevailing skies.

This emulsion camouflage works for most of the time.  But, on those very dark days typical of a British winter, the magnitude and outline of the structure – an Amazon warehouse and distribution centre – become very obvious indeed.

There are those who would say that this is an appropriate metaphor for Amazon’s business model – something cleverly designed to disguise its real nature. But, in an era of everyday austerity, factors like tax avoidance and workers’ rights come under much closer scrutiny.

In just 20 years Amazon has grown from a small online business selling books, to become the biggest internet trader in the world. But what puzzles observers of the company’s business model is that, in all this time, until very recently, Amazon has failed to report a significant profit.

Is this, as some believe, the consequence of founder and CEO, Jeff Bezos’s doctrine; constantly ploughing profit back into a variety of ventures to grow and achieve global retail domination? Or is it, as others have suggested, a gigantic and, up until now, successful attempt to pay as little tax as possible?

Amazon, together with other internet giants like Apple and Google, has come under intense pressure to revise its tax strategies in recent years. Amazon’s UK subsidiary employs more than 7,000 people in Britain, and regularly reports increasing profit and growing market share. But, but until recently, sales were booked through its Luxembourg arm, therefore avoiding higher UK rates of tax.

While the UK government is in the process of closing some legitimate tax loopholes – and Amazon and others are now paying a greater share of their UK profits to HMRC – the consensus of opinion is that these ‘smoke and mirrors’ strategies are questionable, to say the least.

The reality, of course, is more complicated. Amazon is an intricate business with many moving parts which has grown at an astronomical rate in the last two decades, spreading into wider retail markets and, more recently, into media. Growth of this nature and rate is costly. Amazon says it is perfectly legitimate to invest profit into new streams and activities, and therefore it is no surprise that overall profits have been relatively low by ordinary business standards.

Elements of the business are well-established and they produce steady, regular profit, but other areas are less mature – break-even at best – and often at a loss as markets are established, Amazon are keen to explain.

And this fits with the Jeff Bezos mantra, which hasn’t changed since he quit his steady job with a hedge fund, and decided to go it alone in the mid-1990s. “This is Day One,” he says, frequently. The internet, Bezos insists, is still in its infancy. While others may see it as pretty well-formed, Bezos believes that its promise is limitless. He freely admits that he is obsessed with the potential of the future and claims he is not concerned about profit, just customers, and the endless possibilities over the horizon – which no-one but he has imagined. 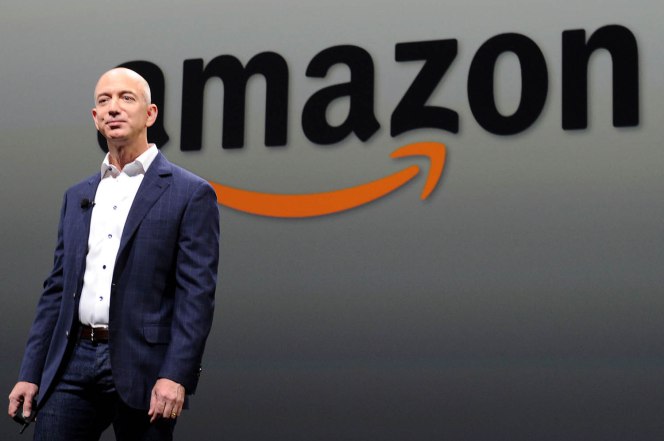 “There’s so much stuff that has yet to be invented,” he says. “There’s so much new that’s going to happen. People don’t have any idea yet how impactful the internet is going to be and that this is still Day One in such a big way.”

Investors still flock to Amazon, despite Bezos’s long-standing claim to be indifferent to profit. Those who buy stock in the business are more concerned with its cash flow figures – which are impressive. The fact that this cash goes, in the main, back into business expansion, is a long-term positive, they believe.

But, over the last year, Amazon appears to have posted larger than usual profits, leading some commentators to wonder what the company is planning. Has it reached its natural peak? Or is Amazon simply proving to onlookers that it can, in fact, produce profits like everyone else – before it plunges into another period of extensive investment – and low profits – in new directions?

There is no doubt that Amazon as a business has changed character since those early, exciting, frontier days. Whereas Bezos was once perceived to be a mould-breaking young business maverick, as the company he leads has grown it has attracted more attention, and criticism of its methods – and not only accusations of questionable financial practices.

Amazon claims to have the world’s biggest selection of products available through its family of websites, sold at the lowest cost at a small profit. But across the globe it is being blamed for driving smaller companies out of business and helping to turn the traditional high street into a wasteland. In 2011, for example, Amazon was lambasted by small businesses when it introduced a price-check app which shoppers could use in an actual store – and were then offered a five per cent discount to buy the same item from Amazon itself.

While Amazon began life as a simple online book seller, it quickly expanded into music and films, electronics and household goods. It also serves as a conduit for other retailers, taking a percentage. The company has been criticised for demanding a 90-day credit facility from its retail users, while it moves stock as quickly as it can, thereby earning interest on its debts as cash sits in its account until the very last moment.

Sharan Burrow, General Secretary of the International Trade Union Confederation (ITUC) said, in 2014: “The company makes no secret that within just a few years it will replace workers with robots.” The ITUC awarded Bezos the title “The World’s Worst Boss”.

Burrow added that some of those employed in Amazon warehouses walked as many as 15 miles a day.  “Workers at Amazon distribution centres are required to wear digital terminals that monitor their every move,” she claimed. “A culture of bullying and harassment is rife. Staff are reprimanded just for speaking to one another or even pausing to catch their breath.”

Last year, the New York Times (a major rival to The Washington Post, which Bezos now owns) described Amazon as “a dystopian workplace where no fun is had and no laughter heard”.

On its publication, an angry Bezos sent a memo to his workforce saying that the article didn’t describe the company he knew. He asked workers to contact him directly if they thought the accusation was true.

The article, based on interviews with 100 employees and former employees, portrayed Amazon in terms usually applied to an evil religious cult, where workers were stressed, frequently reduced to tears, and encouraged to anonymously disparage fellow workers. There were descriptions of staff whose work-life balance was wrecked by working for Amazon. Employees who found the unrelenting pace so tough that they “hit the wall” were told, said the Times, to “climb the wall”. The article went on to claim that winners accrued small fortunes in soaring stock while losers left or were fired in annual culls of the staff — and that was described, by an Amazon HR boss, as “purposeful Darwinism”.

“Amazon is where overachievers go to feel bad about themselves,” said one anonymous comment on the newspaper’s website.

The Times’ article, savagely critical of Amazon’s high pressure work environment, shone an unwelcome light on the issue, which has become something of a talking point – in the USA especially. The comparison with Google, where Googlers are cossetted and cherished to an extraordinary extent, makes Amazon’s tough “churn and burn” approach look positively Victorian. Some believe that Amazon’s share option approach to employees is an attempt to lessen the impact of this costly churn. Amazon personnel must stay on the staff for at least three years to fully benefit from the share package.

Bezos is a driven man. Born and raised in Texas, he epitomises the Lone Star state’s reputation for being deliberately different. He likes to take risks, and isn’t too concerned about losing money if those gambles don’t come off. He believes in hard work as a standard, and expects those same standards from his workforce. He admits that he is fixated on the customer. He recently gave this instruction to his staff: “Step one: do hard things well. Step two: repeat”.

He doesn’t sound like a man who is about to cash in his chips. That’s why most observers believe the company is about to launch into something new – and big. There’s a suggestion, for instance, that Amazon is experimenting with an air freight proposition and has already acquired a dozen or more cargo planes. Bezos is known to be almost fanatical about the fast delivery of goods – another example of his single-minded focus on the customer.

Amazon isn’t like a traditional business. Commentators are left mystified by its labyrinthine structures. Its rivals are often baffled and bemused by its actions, and, as a consequence, are frequently wrong-footed.

As that blue and grey Amazon warehouse which attempts to blend into the landscape of the English Midlands illustrates, camouflage is sometimes essential if you want to stay ahead of the game. 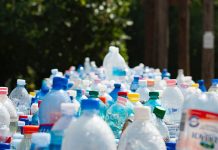