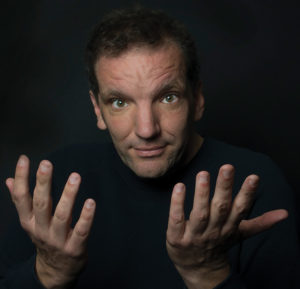 Henning Wehn has carved out the most unlikely career as a stand-up comedian in the UK. Unlikely, because most British people are convinced that Germans simply do not have a sense of humour, as evidenced in the old joke “Where would we be without humour?” to which the answer is “In Germany.”

Mr Wehn’s deadpan delivery is the source of much amusement as it plays on this stereotype. In his October 2015 newsletter he writes:

Now the dust has settled I can give you a much needed and balanced summary of the Volkswagen affair.

As follows: Germany got fantastic PR for welcoming desperate refugees with open arms and presenting itself to the world as what it is: a pleasant country full of pleasant people.

Obviously the masons or some other dark force (the USA, to be precise,) didn’t like it and dragged up a nonsense story about the Fatherland’s biggest car manufacturer breaking some petty rules to do with toxic fumes.

Contrary to current news reports Volkswagen didn’t make their customers drive round in rolling nuclear reactors. Instead some of its cars provided marginally more emissions than they maybe should have. No big deal. Why do people buy diesel cars? Because they’re good for the environment?! Come off it! They have them because they’re cheap to run. Anyone seriously concerned about the environment takes the bus. Or cycles. Or walks.

So, in a nutshell, we’re dealing with despicable anti-German slander at a global level. But rest assured it’ll blow over soon and the whole affair will be remembered as nothing more than a storm in a jerrycan.

Have a great month.

PS: Did I tell you that on October 3 Germany celebrated the 25th anniversary of reunification, the greatest success story in the history of mankind?

Mr Wehn hails from a small town in the Ruhr Valley. Working in sports marketing and fearing his employer was about to go under, Mr Wehn decided to move to England and improve his language skills. He had never visited the country and his preconceptions were largely based on the 1980s After Eight television adverts and the unruly drunken British holidaymakers he met while vacationing in Spain. Mr Wehn approached all 92 football league clubs to ask for a contact name to whom he could send his CV. Port Vale FC told him to send his CV to Barry Bigtits. The German comic says he was pretty sure the name was made up but he went ahead as he had nothing to lose. Of course it was a joke.

The happy outcome of his trawl around the football clubs was a marketing job at lower league Wycombe Wanderers FC. Mr Wehn packed his bag and moved to the UK. He found lodgings at the home of an octogenarian Wycombe Wanderers volunteer who introduced him to indigenous British culture and cooking.

Mr Wehn had grown up appreciating British comedy shows such as Monty Python, Benny Hill and Mr Bean. One evening at an open mic comedy night, had had a go. After all, how hard can it be? Mr Wehn has gone on to make a successful career out of German stereotypes. His heavily accented English and earnest delivery mask a devastating humour and the insight of an outsider.

“My poor English turned out to be a big advantage as I couldn’t understand the hecklers. Also, being German got me more media attention than I deserved.” He says his nationality made it easy for him to get media exposure but rather more difficult to get gigs.

World Wars and football are two arenas contested between the Brits and Germans. These two provide the source material for much of Mr Wehn’s early work. One story he tells concerns his British friends asking where they are going for lunch. The punch line is: “If Henning is coming we can’t go to the Polish place next door because he is never going to leave.”

Taking the stage in Billericay, Essex, he found the entire audience wearing Hitler moustaches. He recalls: “That wasn’t menacing. That was the Great British sense of humour. I thought it was hilarious and they thought they were the first to come up with it.”

Mr Wehn extracts amusement by playing up to the stereotype of efficient but humourless German: “Either I’m funny or I live up to a national stereotype — it’s win-win.”

After thirteen years on the stage, the football-fan-turned-comedian is an established face on the comedy circuit, has just completed a nationwide tour, and featured in many radio and television shows.