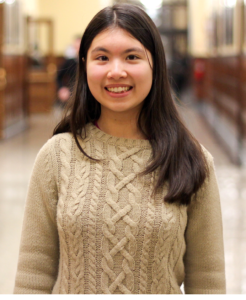 “Since the age of four, I’ve been exploring what I can do with the written word: everything from championing literacy to raising awareness about world hunger.” By the age of seven, American teenager Adora Svitak had already written more than three hundred short stories. Her early fiction ranges across time and place: one story is set in ancient Egypt, the next in the Renaissance. Her descriptive odysseys combine a childlike sense of wonder with dialogue and descriptions that demonstrate a keen insight into character. Throughout her childhood she continued to generate thousands of words of fiction, nonfiction, and poetry every week.

The book Flying Fingers: Master the Tools of Learning Through the Joy of Writing was jointly written by Adora and her mother Joyce. Published when she was eight, it is a compilation of Adora’s historical fiction and adventure stories, writing tips, opinions on politics, religion, media, and education, plus a collection of her earlier poems. Mrs Svitak compiled a special “parents’ section” for each story which contains teaching tips and writing activities that parents and kids can do together. Flying Fingers was published in English and in Mandarin.

Flying Fingers launched the child prodigy on the speaking circuit. As a 12-year-old, Adora Svitak gave a TED talk on What Adults Can Learn from Kids, telling her audience that the world needs childish thinking: bold ideas, wild creativity, and especially optimism. Kids’ big dreams deserve high expectations, she says, starting with grownups’ willingness to learn from children.

Ms Svitak describes herself as an activist for feminism, liberal politics, and youth empowerment. Hearing someone mutter “I hate reading” spurred her promote literacy at schools and libraries which, in turn, led to her being named a Verizon Foundation Literacy Champion.

Ms Svitak’s work in the youth empowerment arena has included public speaking and organising the youth-run event TEDxRedmond for four years. She has written opinion pieces for the Huffington Post and delivered speeches for audiences of girls on promoting women’s rights.

Ms Svitak is the daughter of a Czech father and a Chinese mother. She was born in Oregon and raised in Redmond, Washington. Her father, a PhD in Physics, is a software engineer. Her older sister Adrianna, also a child prodigy, is now a teacher and performer playing the piano and violin. In 2008, the Svitak sisters published a book called Dancing Fingers, a collection of poems and poetry writing ideas for use in the classroom or at home. The aim of the book is to encourage kids to explore their own writing potential.

Perhaps one key to the Svitak girls’ achievements lies in their mother’s insistence that her children should not be stifled academically or rigidly channelled. She decided to home school both girls during their early years. However, the Svitak sisters deny that they were raised by the archetypal Chinese tiger mom. However, she has clearly been a major influence in getting the girls’ writing published while they were still pre-teens.

In 2009, the then-11-year-old Adora featured as one of only three kids in the Channel 4 documentary The World’s Cleverest Child & Me in which the director set out to explore the environment that nurtured very gifted individuals. The programme showed the Svitak girls following a timetable that consisted of working all day and most of the evening as well. The young Adora assures the viewers: “It’s all really fun for me.”

In the documentary, her mother insisted: “It’s not me who’s doing the pushing.” Mrs Svitak said her daughters’ success is the result of their own hard work and dedication: Adora Svitak explains that her home schooling helped her get ahead: “The local school insisted that I, being three, should go to preschool, and my sister, being five, should go to kindergarten. By that time, I was already reading chapter books.”

Having achieved so much at such a young age, Ms Svitak has turned to monetising her gifts. On her website, Ms Svitak offers her services as advocate, speaker, and teacher. She also continues to blog prolifically. Media savvy and commercially astute, the young Svitak sisters know how to make their mark.

The easy sell: retail is the best industry for start-ups