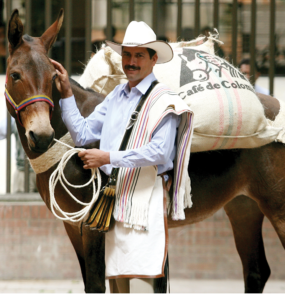 Juan Valdez, a moustachioed campesino has been featured in advertisements for Colombian coffee since 1958. He is a familiar face throughout the Americas and in Spain. Typically, the cheery peasant appears with his mule Conchita carrying sacks of coffee beans. Juan Valdez has become an icon for Colombia as well as coffee in general.

The ageless coffee farmer is in fact a brand identity, carefully developed to represent coffee beans that are grown and harvested only in Colombia. Juan Valdez owes his existence to the National Federation of Coffee Growers of Colombia (Fedecafé), a cooperative representing over half a million small-scale producers which promotes the production and export of Colombian coffee. Fedecafé wanted an advertising campaign that would distinguish pure Colombian grown coffee from coffee blended with beans from other countries. Nearly 60 years later, the campaign is still going strong; its longevity a tribute to strength of the original concept.

Juan Valdez is now in his third incarnation. The role of Conchita has been shared among a larger number of mules. The first Carlos Valdez was played by José F Duval until he was succeeded by Carlos Sánchez in 1969. In 2006, Señor Sánchez retired and Carlos Castañeda, a grower from the town of Andes, was awarded the coveted role. All three sported the same rugged good looks, dark moustache, sombrero, and poncho.

By the 1980s, the brand, designed by advertising agency Doyle Dane Bernbach, was well-established and widely recognised throughout the Americas. Colombia’s handpicked Arabica beans, grown at high altitude on cool, shaded mountain slopes, gained a deserved reputation as a premium product, notably in the United States.

However, by the late 1990s, the price of coffee had plummeted and Colombian coffee no longer had the same cachet. Fedecafé needed a new marketing strategy to ensure its members’ livelihoods. In 2002, it created the private company Procafecol to buy its coffee from the cooperatives’ members and pay royalties for using the Juan Valdez brand to a National Coffee Fund.

In its early years, the Juan Valdez advertising campaign had been aimed at the export market rather than domestic consumers. Most Colombians drank tinto, a black bitter coffee made from low-quality beans. They also consumed coffee at home rather than in cafés. Procafecol set out to change this by developing a coffee house culture in Columbia. The first Juan Valdez Café at Bogota’s international airport opened in 2002, and within a couple of years there were cafés around the country, converting Colombians from drinking reheated tinto to sipping a sophisticated selection of coffee brews.

International expansion followed with modern Juan Valdez coffee shops cafés opening in North America. Between 2006 and 2008, Procafecol opened more than a hundred stores around the world. However, the international coffee shops were hit by the global financial crisis which forced many to close.

A new strategy is now in place: rather than mimic Starbucks, the Juan Valdez café chain stresses its Colombian origin. Customers of the new-look Juan Valdez cafés see large photographs of the smiling campesino with the company’s key new message: “Carlos is one of the 500,000 coffee growers who owns this coffee shop.” Pictures of the Colombian mountains and coffee plants abound. The cafés décor includes traditional Colombian floor tiling while the menu features staples such as fresh arepas, a Columbian flatbread made of ground maize dough or cooked flour.

Colombia is the world’s third largest producer of coffee after Brazil and Vietnam. High-value coffee production provides a significant anchor of stability and economic diversification. Juan Valdez is one of the world’s most successful marketing campaigns. Coffee is now almost synonymous with Colombia. The campaign has succeeded in branding an entire country.

Juan Valdez has become one of the most recognised icons in the Americas. It is a tribute to the original concept that the smiling small-scale coffee-grower has endured and evolved fpr six decades. By convincing consumers that there are specific benefits of Colombian-grown and harvested coffee beans; that soil components, altitude, varieties, and harvesting methods create good flavour, the Juan Valdez campaign has played a key role in ensuring the sustainability of the half a million coffee farmers who have joined forces in Fedecafé.