When the Cold War cast its sinister shadow over Europe, one man turned a key that opened a door for the USA, and allowed them to strategically place nuclear weapons that would keep the uncomfortable stand-off from escalating.

The keeper of those keys was the same man who was instrumental in the design of the European Monetary System. To many, he was a pure genius who prevented a nuclear holocaust. To others, he was an acid-tongued meddler who put the desires of Europe ahead of the needs of his native Germany.

Alarmingly, few people these days will recognise the name Helmut Schmidt. He would probably have liked it that way. For all his assertive dynamism, political skill, and indefatigable leadership, in private he was a modest man who liked to retreat to the side lines once the hard work was done. He died peacefully at his Hamburg home on November 10 at the age of 96.

Mr Schmidt had an uncanny gift for politics and economics, and was outstanding at both. But they were skills he didn’t even realise he possessed until he was held as a prisoner of war by the British following the Battle of the Bulge in January 1945.

The Nazi Party had not long come to power in Germany when the 14-year-old Schmidt (disguising the fact he had Jewish grandparents) became a group leader in the Hitler Youth. He joined the German Army in 1937, two years before the outbreak of World War II in which he served on both the eastern and western fronts. His talents for leadership were quickly recognised as he rose to the rank of first lieutenant, earning the Iron Cross in the process, before his capture in the Ardennes – the Nazis’ last major offensive of the Second World War.

The young Schmidt was as tough as they come: he was born in the deprived slums of a notorious Hamburg district where people had little work. The First World War had ended only a month before, and his hard-working parents struggled to put food on the table. He grew up in a crippled Germany that was tormented by social and economic hardship.

It was his difficult upbringing, combined with despair over Germany’s role in the war, that channelled him into politics. While being held by the British, he and his fellow prisoners would discuss Germany’s future. His comrades persuaded him to join the centre-left Social Democrats as soon as he was demobilised in 1946.

Having grown up through great hardship, Helmut Schmidt strived to better himself. Graduating from Hamburg University (where he had been the national chairman of the Social Democrats’ student wing) in 1949, he went on to become an economic adviser to Hamburg’s regional government.

By 1953, Mr Schmidt was elected to the federal parliament where he soon made a name for himself as a bit of a loudmouth upstart. Before long, his peers would brand him Schmidt-Schnauze, believing he would often be poking his nose into their work while being too outspoken. Despite the occasional run-in with party members, Helmut Schmidt was usually right in his advice and assessments leading his colleagues and adversaries to develop a deep affection for the mouthy maverick. Loyalties were, however, tested to the full when he defied his own party’s anti-rearmament stance while refusing to negotiate terms for an interim confederation with East Germany.

His pragmatic and unwavering approach won the day and he was soon revered among politicians of all persuasions as a man who was a pure and uncomplicated force for the good of Germany. 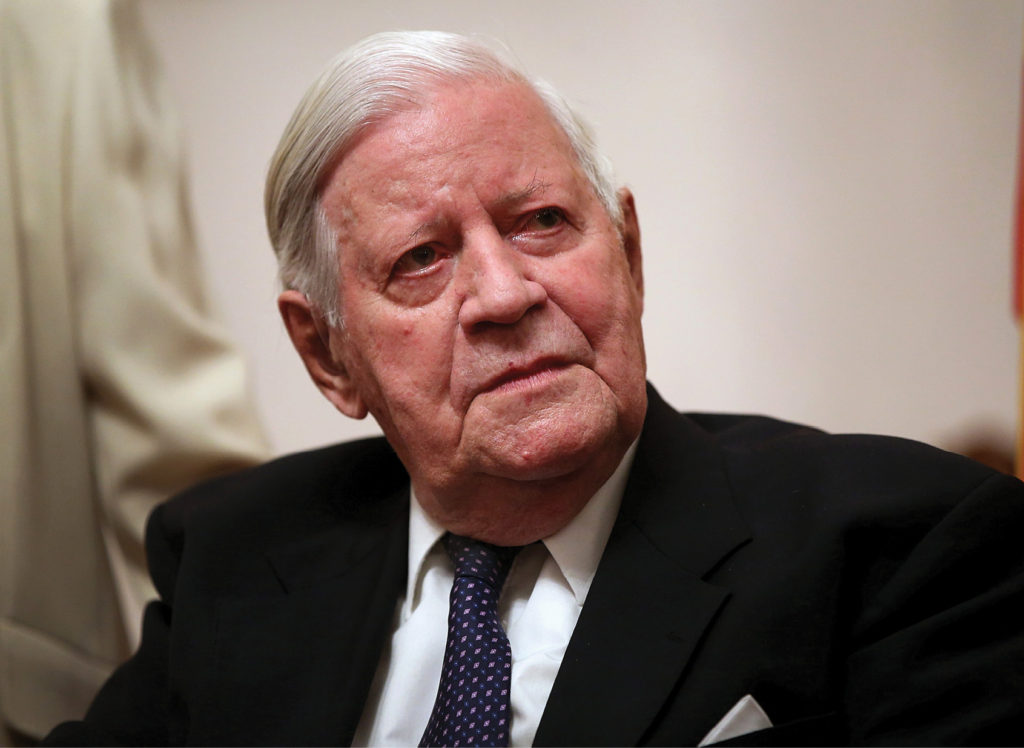 With hard-line opinions on rearmament, Mr Schmidt was appointed minister of Defence. In that capacity he directed the re-emergence of the arms industry in West Germany under the suspicious gaze of Britain and America. With his trademark forthright style, he revived Germany’s arms production without running afoul of other former foes and, in the process, set out his stall as a future leader of West Germany.

His political success and economic acumen did not go unnoticed and, in 1972, he was appointed minister of Finance under the much-loved Willy Brandt. The chancellor’s Ostpolitik, which paved the way for a Nobel Peace Prize, was enthusiastically embraced by Helmut Schmidt who leveraged it to help strengthen West Germany’s economy. Two years later, Helmut Schmidt himself was swept into office as Chancellor Brandt’s successor.

Elected in 1974, he instantly faced one of his country’s most difficult periods since the war. The world was in the grip of economic chaos and relations with the Communist East were strained. As chancellor, Helmut Schmidt continued to be robust and strong in his leadership. Some would say too strong.

His spirit was dominated with one overriding – to see Germany unified. His pursuit of this dream drove the Schmidt Administration to continue its dialogue with communist leaders. However, his determination could not prevent the Soviet Union from turning up the heat on an arms race that was making much of the world nervous. Chancellor Schmidt felt he had no option other than to go toe-to-toe with the Red Army.

Despite his often publically proclaimed disdain of America, Helmut Schmidt cleared the way for the US to deploy nuclear missiles on West German territory, with warheads aimed directly at the USSR. The rationale behind his strategy was to ensure a military balance and form a stand-off with potential consequences so severe that both parties would, eventually, find an honourable way to back down. MAD (mutually assured destruction) has arrived in Germany and the Germans soon learned to love bomb.

On reflection, Helmut Schmidt’s policy was the work of utter genius. Sadly, and without the benefit of hindsight, most of the West German population didn’t quite see it that way at the time.

Mr Schmidt was a staunchly pro-European politician and would frequently appeal to the UK not to leave the European Community, often citing his own experiences during the Second World War to fortify his calls for a more united Europe. His fervour for uniting nations was rewarded when he became a key player in the launch of the European Monetary System with his French counterparts. It was the beginning of another of Helmut Schmidt’s dreams – a single currency for a unified continent.

As with most successful leaders, their power and allure eventually wanes in the eyes of the public. And so, in 1982, the fragile coalition that supported the Schmidt Administration fell by the force of his own left-wing rebels and Helmut Kohl was made the new chancellor.

Helmut Schmidt wasn’t a bitter man. He took defeat gracefully and quietly, but even his pride couldn’t prevent him from recognising he had made policy errors and displayed an all-too-cocky disregard for several of his peers. He’d always had a knack for rubbing people up the wrong way, and it had seemed destined to one day be his downfall.

Retirement didn’t diminish Schmidt’s ever-present need to cause mischief. He was a regular columnist for the Die Zeit newspaper, of which he was also co-publisher for many years, where he was known for his outspoken views on the economy.

Helmut Schmidt did live to see his two lifetime goals become reality, but they were tinged with a little heartache at the fact he wasn’t in power to help push them through. The pleasure of being the chancellor when Germany was united fell to his successor Helmut Kohl, despite Helmut Schmidt putting in most of the groundwork. It was the same when the euro was rolled out across the EU’s member states. Again, much of it had been down to Helmut Schmidt who was forced to watch the historic event from the margins of public life.

Still, his legacy did not detract from the fact that Helmut Schmidt is justifiably hailed as one of the brightest economic and political minds to come out of post-war Europe.