Some of the world’s most promising economic partnerships straddle the Asia-Pacific Region. That vast spread of economies offers a contrasting landscape of competitiveness. While some markets thrive and set the agenda for global thinking, others struggle to keep afloat.

In its 2014-15 Global Competitiveness Report, the World Economic Forum (WEF) mapped the fortunes of the region that hold three of the world’s ten most dynamic and successful economies. Conversely, the region also comprises five of the worst performers.

Years ago, the WEF welcomed the rise of the Asian Tigers – a collection of economic powerhouses that drove not only regional growth, but also seemed unfazed by downturns elsewhere. The widening fiscal gap between South Asian and South-East Asian markets is, however, cause for concern. Led by the Philippines, the big five of South-East Asia are making massive strides on the world markets. Malaysia, Thailand, Indonesia, and Vietnam are all chasing Manila up the competitiveness rankings. In South Asia, only India is made the grade and that country’s economy may already have peaked.

Gauging the mood across the region, the WEF Global Agenda Council on South-East Asia found that most business and civic leaders are concerned over the slow pace of structural economic reforms, management challenges resulting from increased urbanization, and simmering geopolitical conflicts such as the standoff between China and the US over the Spratly Reef in the South China Sea which now also involves Vietnam, Japan, and the Philippines.

Former Australian Prime Minister Kevin Rudd ascribes the disputes, in part, to Asia’s cultural and linguistic diversity which conspires against attempts to forge a sense of community. While supply chains do not reach across borders and intraregional trade flourishes, Mr Rudd fears that the opposing forces of nationalism and globalisation may continue to fuel regional acrimonies. Unresolved territorial disputes and vague boundaries add to the mix. “We need to involve a common concept of community through the wider East Asia-Pacific.”

Mr Rudd suggests more attention be paid to economic, political, security and socio-cultural concepts. He applauds initiatives such as the Regional Comprehensive Economic Partnership (RCEP): “This is an important step that provides for a stronger and more effective political mechanism within the Asia-Pacific Economic Cooperation (APEC) Forum and the ASEAN Regional Forum. The truth is, regional institutions in the Asia-Pacific are not as robust as those that have evolved in Europe. Because the Asia-Pacific region looms as being the strategic cockpit of the 21st century, we need more robust institutions than those we have at present.”

The Global Agenda Council on South-East Asia notes that the region is likely to keep growing at an accelerated clip. OECD (Organisation for Economic Cooperation and Development) projections see the wider region growing its economies by an average of 5.5% annually over the next two years. To underpin this expansion, a number of ASEAN (Association of Southeast Asian Nations) member states now mull the creation of an ASEAN Economic Community (AEC) to form a single market.

In a sign of the region’s determination to create a single market, the implementation of the first AEC provisions was brought forward from 2020 to December 31, 2015. In the AEC Blueprint 2025, adopted at the 27th ASEAN Summit held in November in Kuala Lumpur, the member states pledge to fully shape their common market over the next ten years.

The AEC blueprint sets out five defining characteristics for the block-in-being: a highly integrated economy; a competitive and innovative market; enhanced interconnectivity and cooperation; people-oriented inclusive structures; and, insertion into world markets. Using the blueprint as a guide, ASEAN nations will now elaborate more detailed plans through the association’s sectoral entities. The initiative also calls for the setting up of a comprehensive institutional framework that mirrors the one created by the European Union.

Once formed, the ASEAN Economic Community will be a unified market of around 620 million people with a combined GDP in excess of $2.6 trillion. As such, the AEC aspires to become Asia’s third largest economy – trailing only China and India – and the seventh largest globally.

During its current two-year term, the WEF Global Agenda Council on South-East Asia intends to maintain its focus on close collaboration with both the ASEAN Secretariat and the association’s business leaders. The council wholeheartedly supports the AEC implementation process and will continue to provide advice to key leaders driving this initiative. The council is particularly attentive to the pitfalls of economic integration and is working on ways to mitigate negative impacts. 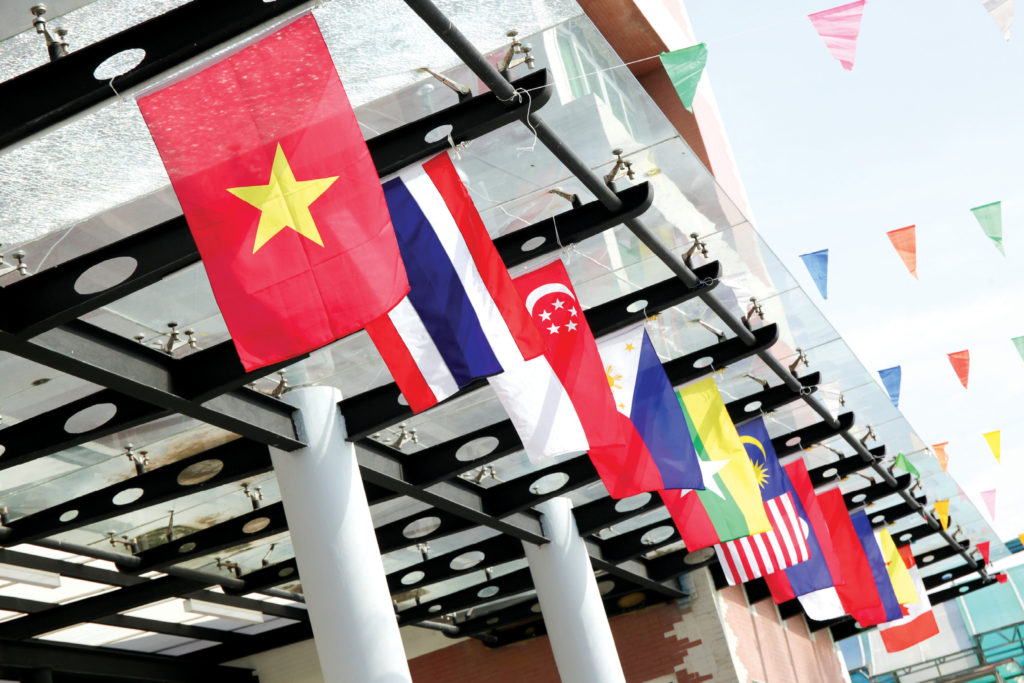 Further to the south, New Zealand is steadily rising as one of the region’s biggest success stories. According to the WEF Global Competitiveness Index, New Zealand ascended to 17th place last year – it’s highest rank to date, and an achievement that will likely be further improved upon. Meanwhile, next door Australia in heading in the opposite direction. In 2009, Australia was one of the best performing countries globally. However, it has since slid downwards. Despite its enviable education system and solid banks, the country’s macroeconomic predicament appears to create a financial tripwire for many of the nation’s larger businesses. A proliferation of red tape hampers trade while its rigid labour and immigration laws cause businesses to postpone or redirect investments.

Much of the attention in Davos will be directed at China and its economic outlook. A key area of discussion – besides the exchange rate – concerns the proliferation of government-backed manufacturing hubs. While some regard the state-subsidised factories a template for success, other pundits believe China’s push for more and bigger can yet bring world markets crashing down.

For instance, the Chinese government pumped untold billions of yuan into steel mills which have now amassed a sizeable surplus. The country’s authorities sell off their excess steel on the cheap, effectively putting other manufacturers throughout the world out of business. This loss was felt most recently in the UK where Tata Steel scrapped hundreds of jobs which, it claimed, vanished as a direct result of cheaper imports from China.

With its demographic dividend now mostly spent, the economies of Asia need the brace themselves for the impact ageing populations will have on their finances. “Population ageing has profound implications, not least in terms of how sufficient revenue can be generated to sustain the enormous infrastructure investment by the government,” says former Australian PM Kevin Rudd. “Parallel reforms will also be required for long-term social security insurance, as the traditional patterns of looking after older people will change as family sizes decrease.”

Already now grappling with the issue, Japan’s Prime Minister Shinzo Abe has already initiated a set of bold reforms to revitalise the country’s economy that has been lingering in a state of suspended animation for close to twenty years. Adopted in 2012, Abenomics is best explained as quantitative easing on steroids.

Pursuing both reflation and growth, the policy has not been without success: while they yen lost 22% of its value in 2013 alone, unemployment dropped to 3,7% and stock markets boomed with the Nikkei gaining 55% in the twelve months up to May 2013 and (mostly) pointing upwards ever since. While the weaker yen made essential imports more expensive, export rose in tandem, allowing Japan to maintain its healthy current account surplus.

For all its apparent troubles, China is not a spent force. The country’s reform agenda, adopted by the Communist Party’s Central Committee in 2013 and largely underreported outside the country, aims to further empower the private sector in an attempts to vastly improve efficiencies in the allocation of assets and financial resources, and – by doing so – strengthening market forces and impulses.