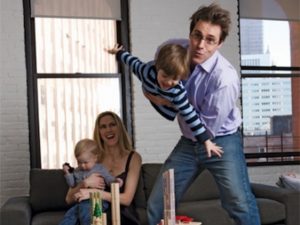 THE idea of turning parenting into a corporate mission would be enough to reduce most mums and dads to dribbling wrecks, but when Rufus Griscom and his wife Alisa Volkman sat up in the early hours feeding their newborn son, they could see – even through squinting, half-asleep eyes – there was an opportunity amid the fog of bottle warmers, sterilisers and nappies.

Their pre-dawn chats involved plenty of discussion about what it takes to be a parent – all the insecurities, uncertainties and questions of whether or not they were doing it right. It didn’t take long before they realised their own concerns needed a wider audience. Before their new-born was a year old, their whispered businesses meetings by the changing table were steering them towards launching a website for parents to communicate and share advice.

The pair were no strangers to digital platforms, they already ran a reasonably successful website. Just not one that ignited conversation about nappy rash, potty training and teething. Quite the opposite, in fact. Instead, they were the brains behind Nerve.com – a website dedicated entirely to sex, albeit with a stylish, almost avant-garde approach to the subject.

However, the pair took the transition in their stride and quickly launched Babble – a website which continues to draw in millions of users eager to share and digest every day parenting problems.

They tapped into their own, often catastrophic, experiences to populate the site and litter it with an almighty array of parenting taboos that were just waiting for readers to delve into and become part of the discussion.

Babble was an instant hit, but monetising such a site came with several difficulties. Griscom and Volkman turned to several venture capitalists to take Babble to the next level before selling Nerve.com for an undisclosed, but extremely large, figure to dating website HowAboutWe. Babble itself was recently acquired by Disney.

Although sitting on a significant personal fortune, some of the funds from the acquisition of Nerve and Babble have allowed Griscom to plough money into his latest online venture – Heleo, a website designed to give great thinkers and writers a worldwide platform.

Heleo, like Nerve and Babble before it, is extremely US orientated. In fact, you could even narrow that to ‘New York orientated’. But insiders say the content and style of Heleo could translate well across the Atlantic, with anticipation high that a UK version of Griscom’s latest brainchild could come about soon.