PwC recently published a report in conjunction with the Lagos State Chamber of Commerce and Industry (LCCI) on the key macro-economic challenges in Nigeria. PwC reviewed the impact of low oil prices on economic indicators and also considered the question of priority sectors that Nigeria should target for diversification efforts. This analysis also points to areas rich with investment opportunities.

Nigeria has the largest economy in Africa and the 22nd largest globally. Many experts have predicted that the economy has potential to rise through the world rankings to top 10 by 2050 with a projected GDP of US$6.4 trillion, surpassing Germany, the United Kingdom, and France. This cannot be achieved if the country continues to rely heavily on crude oil. Diversification of the economy is required as Nigeria’s intrinsic potential lies beyond oil.

The devastating impact of the slump in oil price on the economy over the past 18 months is an eye opener. Harnessing the potential of the country outside oil has become imperative and the only way the predictions can ever be achieved.

Half Full or Empty? 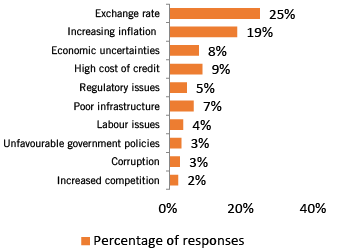 Nigeria’s economy grew by 2.7% in 2015, which represents the slowest growth in the past five years – much lower than the 5-year real GDP average of 4.8% annually. Real growth decelerated sharply to 2.1% in Q4 2015, reflecting the weakest quarterly performance following a contraction in growth across industries and moderation in the services sector.

The slow growth is largely due to the real growth in the crude petroleum and natural gas sector which was -5.4% in 2015, even as oil exports declined by 49% in 2015. The performance of the manufacturing sector was also unimpressive with real growth at -1%. This was largely due to the impact of the unavailability of foreign currency for raw materials and intermediate products. The drop in the country’s foreign currency revenues from crude oil means that the Central Bank of Nigeria (CBN) has struggled to meet the foreign currency needs. The current account is in deficit.

Measures have been implemented such as limiting the products for which foreign currency can be obtained at the official rate of exchange and unplanned delays in meeting valid applications for foreign currency through formal banking channels. Many businesses have been forced to look for alternatives in the parallel market which has traded at a 30%-100% premium to the official rate of NGN199/USD since the start of 2016 due to high demand. The impact on businesses is significant costs, due to exchange rate losses on foreign loans or cost of inputs – which the market has not been able to absorb in the form of higher sales prices.

Despite the negative statistics, several sectors are considered to hold huge opportunities for investment. Based on PwC research, these are agriculture, downstream petroleum, retail, and ICT.

For businesses that are well established in the country, there is a common theme amongst their top executives. PwC conducted a survey to understand their assessment of the current situation and their reactions to ensure survival through these challenging times.

Declining sales – A significant number of companies (61%) experienced declining sales over the past 12 to 18 months with the highest impact across the healthcare, telecommunications as well as the oil and gas sectors.

Investment decision – Close to half of the companies cited the delay in investment decisions as a significant implication of the current uncertain business environment. Other firms have taken a long term view and commenced investments in domestic substitutes (14.8%). Some companies have been forced to diversify across products and/or markets whilst others have cut back on CAPEX plans. 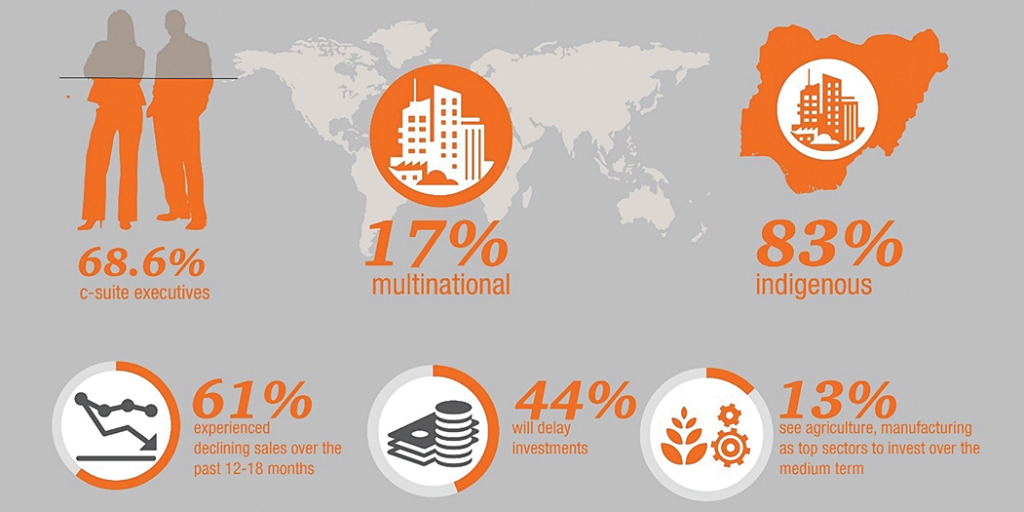 Reaction for sustainable value – Companies are adapting to the current economic realities by improving operational efficiency in the face of declining, or at best sticky, revenue growth. According to the survey, 42% of respondents have embarked on cost optimisation techniques with 14% reducing dependency on imports and 16% sourcing local substitutes. About 18% of companies are retrenching staff.

It is almost a knee-jerk reaction to downsize in these economic times or to delay investments. However, companies should be mindful of their short term actions not to jeopardise long term opportunities. For example, in the ICT and services industries, which rely on innovative ideas from staff for competitive advantage, it may be advisable to identify, retain, and motivate highly skilled staff rather than retrench them. Similarly, some assets and securities are currently under-priced, so it is an opportunity to consider investment decisions now given the significant discounts subject to availability of funds.

A few reactions from the government are summarised below:

Monetary easing – In the November 2015 Monetary Policy Committee meeting, the cash reserve ratio was reduced to 20% and the monetary policy rate was reduced from 13% to 11% in order to boost liquidity and credit to critical areas of the economy.

Foreign exchange policies – The CBN harmonised the two existing official rates in February 2015 resulting in the closure of the Wholesale Dutch Auction System (wDAS) and the Retail Dutch Auction System (rDAS) window. As a result, there was a devaluation in the exchange rate from NGN 165/USD to NGN 199/USD. The rate has been somewhat fixed at this level since February 2015. In addition, administrative measures were introduced to restrict some 41 items from official access to foreign currency. There seems to be reluctance by the CBN to further devalue and this has created some uncertainty for investors.

Import substitution – Some areas have been targeted for import substitution since 2012 by imposing customs duties or special import levies on certain agriculture commodities – specifically wheat, rice, and sugar. More recently, the bucket was expanded to the manufacturing and automotive sectors. The greatest constraint in the implementation of the import substitution strategy is probably the lack of trade and logistics infrastructure.

Taxation – The 2016 budget proposal anticipates government spending to increase 35% to NGN 6.08 trillion, driven largely by a 215% increase in capital expenditure and social investment programmes. The government expects to fund a large chunk of the budget by generating more revenue from taxation. Some of the activities of the government towards expanding the tax base and increasing compliance are the introduction of technology, aggressive compliance enforcement, proposed joint tax audits, use of consultants, and more collaborations amongst the various revenue authorities.

The implementation of stamp duty on deposits, payment of corporate tax on interim dividends, and other similar initiatives are expected to boost government revenue while the focus on efficiency will help put cost under control. Recent developments also suggest a trend of imposing fines for noncompliance with regulations to promote respect for rule of law but also to generate revenue. 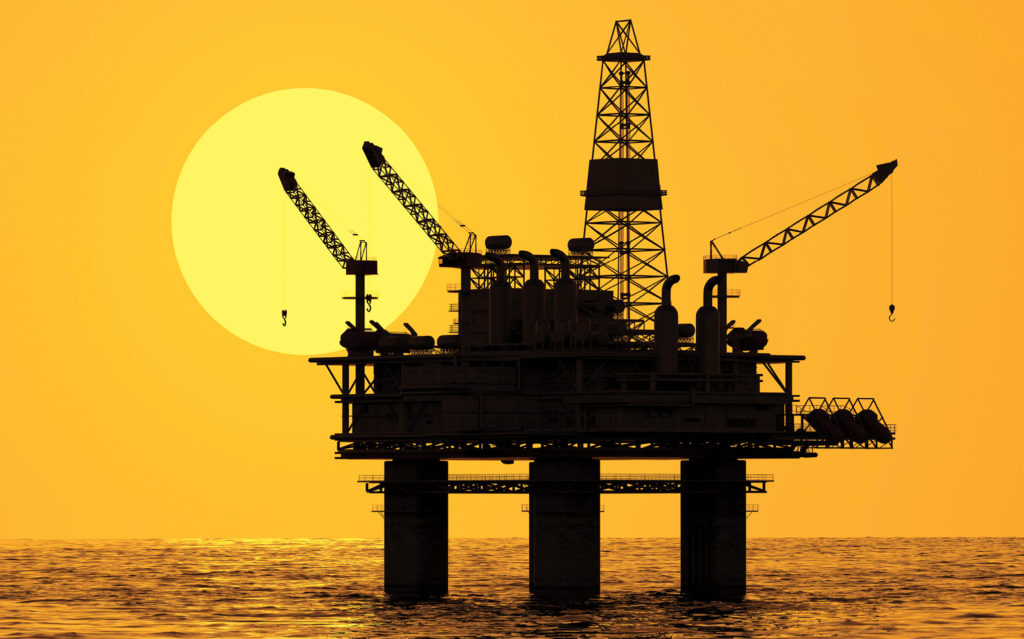 The Nigerian business environment is in a state of flux. But the size of the Nigerian market still provides huge opportunities for investors and corporates even in these challenging times. Businesses are being forced to transform themselves very quickly, not just in optimising costs but in changing the way they operate. For example, historic treasury techniques and policies have been ripped apart under the current currency situation.

While businesses have to be innovative to survive, they must also pay attention to their tax and regulatory compliance as the government will be strict with noncompliance. Businesses also need to develop a tax and regulatory strategy that is embedded within their overall business strategy. Some of the opportunities that companies can consider to align with government strategy is to take advantage of incentives available for domestic production and for exports. Some of these include:

Overall, preserving existing value and unlocking new ones for investors and other stakeholders will require businesses and their executives to carefully consider how best to navigate the challenging landscape while keeping potential opportunities in focus.