It remains somewhat of a mystery how Chancellor of the Exchequer George Osborne manages the UK government’s financial affairs. Presiding over a buoyant economy, planning the biggest privatisation exercise ever, and mandating yet another round of deep spending cuts, the Exchequer should be in robust health. Yet, the summer budget unveiled in July – the first wholly conservative one in eighteen years – still manages to produce a deficit equivalent to around 4.4% of GDP, propelling Britain to the very top of profligate spenders in the European Union; outdone by none and equalled only by long-suffering Spain. Even France and Greece (both -4.1%) perform better. As is usual given the circumstances, Mr Osborne assures all and sundry that surpluses will materialise at some point in the future.

The chancellor’s budget – and Britain’s plight – fits a pattern: while Tories are surprisingly good at sourcing money and boosting revenue, they often display a rather disconcerting ineptitude at managing cash flows. Thankfully, Labour governments compensate for these idiosyncrasies on both counts, thus keeping government on an even keel. This, of course, presumes a periodic alternation of power whereby both players stay true to their respective strengths. Sadly, the equilibrium has been disturbed by New Labour’s insistence on mimicking the Tories who, in turn, moved even further to the right in an attempt to maintain a safe distance from the hoi polloi.

The result of this massive shift of the body politic to the right is an unholy disaster. The UK’s public finances have become seriously unhinged. The persistent budget deficit is but one of many woes besetting Albion. A ballooning current account deficit adds to the troubles. The shortfall is mostly caused by Britain’s inability to produce goods that the world wants to buy. The country’s trade balance is $195bn (£129bn/€183bn) in the red.

Some mitigation is offered by the performance of the City of London, the repatriation of profits derived from overseas investments, and miscellaneous remittances, resulting in a current account deficit of about $150bn (£99bn/€141bn) for the twelve months ending October 1, 2015. This amount equals roughly 4.6% of GDP. By comparison, over the same period the euro area recorded a surplus on its current account equivalent to 2.8% of its economy with The Netherlands claiming the top spot (+10.3% of GDP) and Germany coming in a distant second (+7.8% of GDP).

Underappreciated by most pundits, the current account balance simply determines if an economy is making money or losing it. Countries in the black export the extra cash in the form of investments or loans while those in the red import funds by selling assets, attracting depositors, or enticing investors. At the end of the day, the balance of payments must, per force, be in perfect equilibrium, i.e. zero.

British journalist and author James Meek is deeply troubled by the realities of economic life. In Private Island: Why Britain Now Belongs to Someone Else1, Mr Meek showcases and laments the sale of his country. He fails, however, to offer a remedy. Moreover, Mr Meek seems to suffer from a rather severe bout of nostalgia as he describes the sale of Britain’s crown jewels: the waterworks, electricity generators, railway and postal services, and public housing corporations, amongst a great many others.

Central to Mr Meek’s grief is his argument that water, electrical power, and others constitute essential services nobody can do without. That premise allows the writer to deduce that a water bill is akin to a tax: if payment to an authority – either public or private – is compulsory, it is a tax. From this conclusion, Mr Meek barrels on to deduct that the tax system itself has now been privatised, albeit partially.

Offering a slightly disjointed read, Private Island does manage to shed light on the human dimension of the privatisation process, showing how postal workers are mercilessly driven to exhaustion and nearly all but the über-rich have been deprived of affordable housing.

As a sales catalogue, Private Island is peerless. However, the book fails to dig a little deeper and makes no attempt to uncover the root of the problem: the failure, both surprising and monumental, of the British state to properly manage its interests. 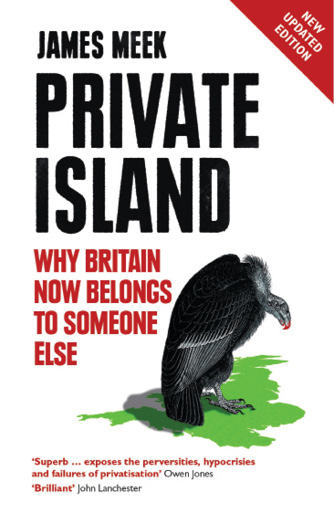 Lest anyone should jump the gun and argue that states have no business running businesses, please feel free to take a look at Saskatchewan, Canada, to see how it’s done. There, the provincial government owns and operates a wide range of businesses through its highly profitable crown corporations whose contributions to state coffers keep taxes low while ensuring excellence in the delivery of public services. Or, stay closer to home and look at Germany where the state owns more assets than any other European country. It may be a somewhat dangerous argument, but German trains do run on time and its banks – the Landesbanken and Sparkassen – remain rock solid, if not rather dull.

In Britain, state-owned enterprises performed rather poorly and were a drain on public purse. Their sale not only bolstered the state’s finances but also plugged a gaping hole in the budget. A study by the London-based Centre for Policy Studies into the finances of 33 privatised enterprises concludes that in the twelve months leading up to March 1980 these corporations between them cost the exchequer £483m in addition to requiring almost £1.2bn in financing. British Steel earned itself a place in the Guinness Book of World Records for losing close to £1bn on a turnover of barely £3bn.

In fact, British Steel offers an interesting case study of how privatisation can go awry in ways not detected by Mr Meek. In 1980, the company was indeed an economic basket case, requiring fifteen man hours to produce a single tonne of liquid steel. However, seven years later productivity had tripled and British Steel was turning a £410m profit on a turnover of £4.1bn. If Margaret Thatcher proved anything, it was that HM Government can run a business at a profit. Pursuing an ideology rather than a fiscally sensible course of action, Mrs Thatcher proceeded to sell British Steel for a paltry £2.4bn.

When Mr Meek deplores the sale of Britain, he would be well advised to look at other statistics than the ones tracing the still ongoing privatisation process. The UK’s lack of manufacturing prowess and the resulting current account deficit represents a more serious challenge inasmuch that, as a net importer of capital, Britain slowly sells itself to “someone else.” Earlier this year, the Bank of England’s Financial Policy Committee declared the current account deficit its most pressing of domestic concerns. Bank of England Governor Mark Carney said that “sustained borrowing from abroad to consume at home is hardly a recipe for a balanced and sustainable expansion.”

To a significantly higher degree than other major economies, the UK dependents on the trust of moneyed outsiders to keep afloat. Notorious for being herd creatures, investors usually balk and head for the exit at the first sign of trouble. If anything could cause such a stampede, it is the UK’s flirtation with an exit from the European Union – the world’s largest single market – and its possible subsequent split into three or more sovereign entities. BoE Governor Carney is fully aware of this doomsday scenario and the devastating effects it will have on Britain. Expect him to issue a number of warnings over the coming months.

Meanwhile, Mr Meek’s book offers a most entertaining read, though the writer has missed a wonderful opportunity to set the record straight and offer an alternative view. He is, in effect, barking up the wrong tree. i