The United States government is outsourcing its business in space at an astronomical rate. Contracts worth billions of dollars are being awarded to private enterprise. This has caused a dynamic marketplace to emerge which supplies cost-effective solutions for NASA’s routine missions.

Initially dominated by corporate titans such as Boeing and SpaceX, smaller companies like satellite manufacturer Sierra Nevada are now making inroads. As a result, the markets gain depth and becomes more competitive.

In September last year, NASA assigned $6.8bn worth of contracts for the development of shuttles to ferry personnel to and from the International Space Station (ISS). That service is currently only provided by the Russian Soyuz spacecraft. Boeing and SpaceX managed to obtain the largest contracts ever awarded by NASA to private enterprise.

NASA’s new plan calls for private contractors to carry out more of the agency’s routine missions. The resulting cost-savings leave NASA more resources to focus on the next frontier in space travel, such as a human mission to Mars, or to an asteroid.

Apart from an unprecedented delegation of manufacturing tasks and launch missions, NASA’s new tack also highlights something rarely seen in the United States: The co-operation across governmental institutions and private companies. SpaceX made a statement regarding their collaboration with NASA, thanking the agency for the help received. In a statement, SpaceX recognised that the company owes part of its success to NASA which freely dispensed both advice and knowhow. 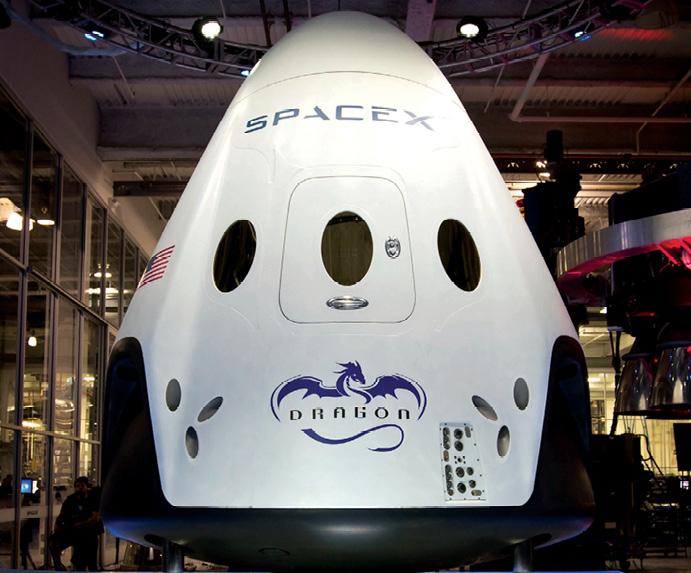 Before 2008, NASA never relied on third-party private companies to develop, launch, and manufacture rockets and satellites. That year, founder and CEO of SpaceX Elon Musk entered the market, suggesting he could provide both the hardware and the launch facilities at a price point that neither NASA, nor the military, could possibly match. At first, SpaceX was handed a $1.6bn contract to fly twelve resupply missions to the ISS.

Currently, SpaceX receives about $166m per launch. This amount includes the development outlay for the company’s Falcon 9 rocket. By comparison, the recently-retired Space Shuttle Programme cost US tax-payers a whopping $1.5bn per bang – or about nine times as much as Mr Musk’s contraption. In fact, the Space Shuttle’s bloated operating budget caused the programme’s demise and convinced NASA to explore private sector options.

Companies such as SpaceX aim even higher and are determined to further lower costs. Their holy grail is the reusable rocket. “Aircrafts are good for tens of thousands of flights,” Mr Musk told Bloomberg in January: “If rockets can be reused, costs can come down to $300,000 or less per roundtrip.”

However, NASA figureheads such as Neil Armstrong believe that SpaceX is overpromising and will not be able to blast manned spacecraft into space anytime soon. Mr Armstrong fears that NASA will be left at the mercy of Russian technology for years to come. However, defenders of the plan, including President Obama, argue that the shift to bigger more ambitious missions is needed for the agency to regain the kind of pioneering spirit it displayed during the Apollo years in the 1960s and 1970s, when it sent men to the moon and returned them safely to earth.

SpaceX has recently started to generate a profit from its resupply missions. In 2014, the company accumulated over fifty launches on its manifest, representing close to $5bn in contracts, of both commercial parties and NASA. Even Internet behemoth Google is now entering the scene and awarded SpaceX a contract worth $1bn to develop and launch a satellite capable of providing Internet access to parts of the world not yet online.

Until quite recently, terms such as privatisation, profits, and competition were alien to the world of space exploration industry. In the future, it may become synonymous.