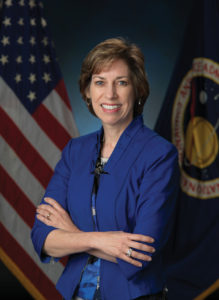 Going into space is the stuff of dreams, fiction, or fantasy. Plans for space tourism may materialise in the future, but currently astronauts are a very select group numbering around 550.

Growing up in California in the 1960s, schoolgirl Ellen Ochoa fantasised about space exploration at a time when only a handful of men had been selected for this awesome privilege – one emphatically out of bounds for women. That didn’t stop Ellen from pursuing her dream to become one of only 45 American women who have “slipped the surly bonds of Earth” to orbit our planet. She has now logged nearly one thousand hours in space travel.

A stellar academic career in science provided the gateway to space. Ellen Ochoa worked hard at school, studied Physics at San Diego State University, and went on to take a Masters and Doctorate in Electrical Engineering at Stanford University before moving to Sandia National Laboratories as a research engineer. She is the co-inventor on three optical patents.

It was not until 1978 that National Aeronautics and Space Administration’s (NASA) astronaut training programme began accepting women. Dr Ochoa applied in 1985. Two years later she was short-listed as one of a hundred finalists for the training programme. In the meantime, she started working at NASA’s Ames Research Center overseeing research and development of computational systems for aerospace missions.

To her delight, at the beginning of 1990, Dr Ochoa was selected by her employer for the rigorous astronaut training programme. This tough course involves physical and mental challenges. Trainees must master space sciences, astronomy, geology, oceanography, meteorology, first aid, survival techniques, and are also expected to become intimately acquainted with every component of the shuttle and its function.

Dr Ochoa qualified as an astronaut in July 1991 and her first trip into space took place two years later: a nine-day Discovery mission carrying out atmospheric and solar studies to improve understanding of the effect of solar activity on the Earth’s climate and environment. In 1994, on her second mission, Dr Ochoa spent eleven days in space as Payload Commander on the Atlantis Atmospheric Laboratory for Applications and Science. This mission studied the energy of the sun during an eleven-year solar cycle to learn how changes in its irradiance affect the Earth’s climate and environment.

In May 1999, Dr Ochoa went into orbit again on a ten-day Discovery mission carrying out the first docking to the International Space Station and delivering logistics and supplies in anticipation of the arrival of the first crew to live aboard the station. As mission specialist and flight engineer, Dr Ochoa coordinated the transfer of supplies and operated the robotic arm during an eight-hour spacewalk.

Her final trip into space came in April 2002 on an eleven-day shuttle mission to the International Space Station when she ventured out four times on spacewalks.

Back on earth, in 2007 she was appointed deputy director of NASA’s Johnson Space Center and was soon promoted to become the second female director in January 2013 – her current post. In a distinguished career, Dr Ochoa has collected a slew of prestigious awards, including NASA’s Distinguished Service Medal, Exceptional Service Medal, Outstanding Leadership Medal, and four Space Flight Medals. As a scientist, engineer, and astronaut, Dr Ochoa has become an inspiring role model whose scientific work enabled her to fulfil her childhood dreams. Not bad for a star-struck Hispanic kid from California.